A few weeks ago I came across an interesting graph showing the energy consumption of some guy’s fridge. The owner of the fridge was Todd Moss, a senior Fellow at the Centre for Global Development. He purchased this new fridge for his single-person household, and was shocked when he compared the energy use of his fridge with the energy use of an average citizen in each of six African nations. He made a graph to show just how much more energy his fridge was consuming.

Here’s the graph (you can read his blog post here): 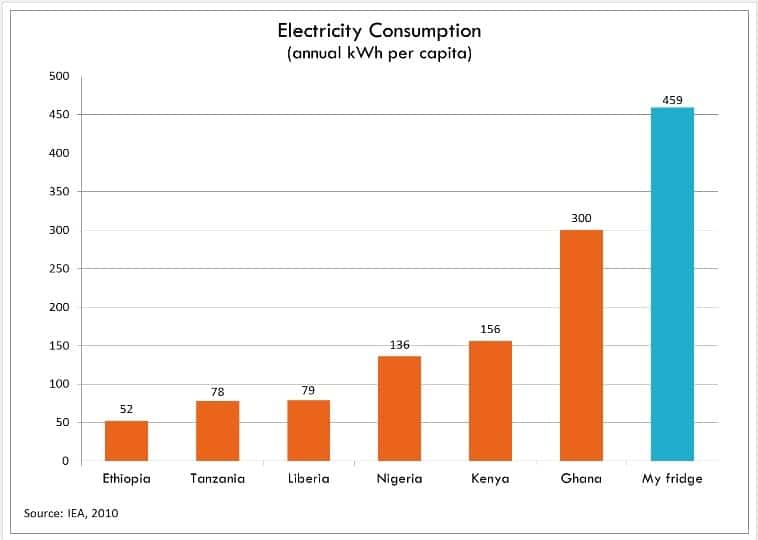 I think it’s pretty shocking that a single appliance uses this much energy. Imagine how much energy he uses when you add in all those other appliances! It got me wondering…how much energy does my own fridge use?

Ours is a 400 litre fridge which was given to us by my boyfriend’s parents when they bought a new one. It was originally purchased in 2002 when energy efficiency ratings weren’t so much on the radar. We were pretty sure it uses a lot of energy – but how much?

When we moved house our neighbour left her old fridge behind as she no longer needed it. At 180 litres it is significantly smaller than the other one, so we decided to try it out and see if we could manage with the reduced size. 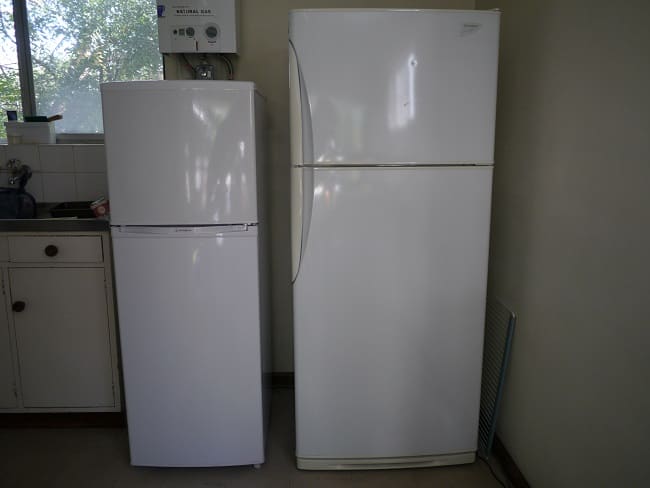 Our old fridge is the bigger one on the right (around 400litres), and the smaller one was our neighbours (around 180litres).

In addition to trying it out for size, I decided it would be an interesting exercise to measure the energy consumption and running cost of both fridges, and borrowed an energy meter from a friend.

How to Use a Home Energy Meter

The meter I used was a Power-Mate PM10AHD. You plug it into the wall, and plug your appliance or device into the meter, and you can read energy use via the screen. 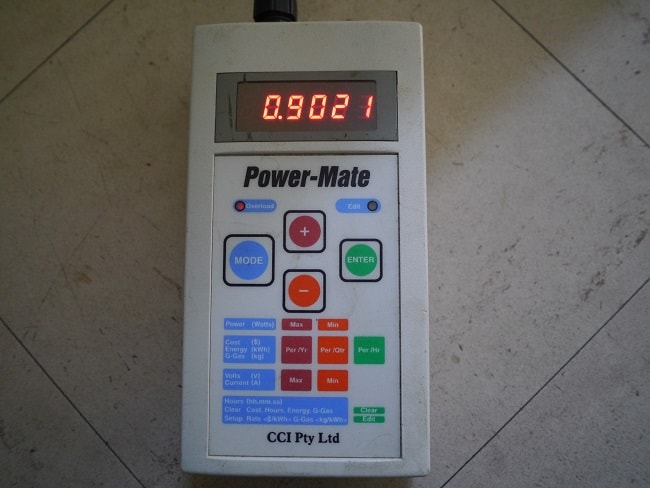 With a fridge or an appliance that runs continuously, you need to wait for 24 hours before reading the data as the energy use will fluctuate throughout the day.

The meter measures a few things, but the interesting ones are power (measured in Watts), time (hours) and energy (kWh – which means kilo-watts per hour).

The meter I used had a handy function for inputting how much my energy company charge ($/kWh), and then it calculates the energy cost per hour, day, quarter and year for me. It’s a pretty simple calculation though: energy used for one hour x cost for one unit will give you the cost for 1 hour. Multiply by 24 and you have the energy cost for 1 day; multiply this by 7 for the cost of one week and so on.

The big fridge costs an extra $80 per year to run at current energy prices!

Here’s a graph showing how my two fridges compare with Todd’s fridge and the 6 African nations: 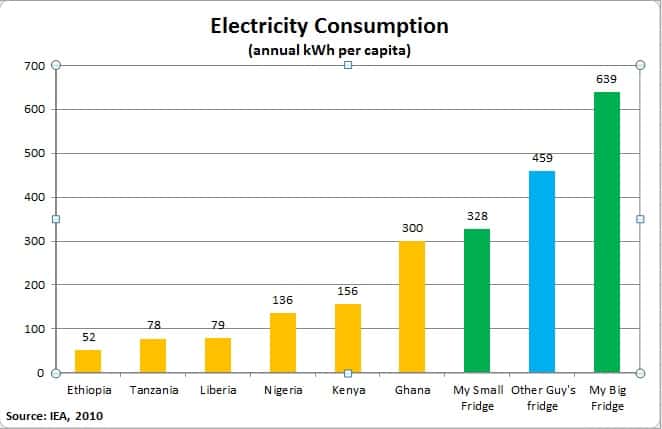 The smaller fridge still uses more energy than an average citizen in each of these countries, but is far more modest than the big fridge, for which the energy consumption is ridiculous. I’m quite embarassed that I have such a power-puzzling monster in my kitchen. Whilst it’s a big fridge, it’s not unusually big for Australia and plenty of people have double-door fridges which guzzle even more energy – not that I’m trying to justify it! My one consolation over Todd’s fridge is at least ours serves two people.

I would like to tell you that we decided to keep the small fridge, but it was just a bit too small. The way we shop, with our fortnightly vegetable box delivery, and my constant baking and making-enough-leftovers-for-the-rest-of-the-week way of cooking, it just didn’t quite work. The minimalist in me is not impressed. We know the big one is too big, but it still works and for the short-term we’re resigned to keeping it.

We sold the smaller fridge on Gumtree (with our old neighbour’s permission); they guy who bought it wanted a second fridge to go in the garage…as a beer fridge. Yep, a separate fridge just for his beer. I wonder what the people in those African nations would think of that?

Have you ever checked the energy consumption of your electric appliances? Were you surprised with the results? Or have you never even thought about it until now? Leave a comment; I’d love to hear your thoughts!