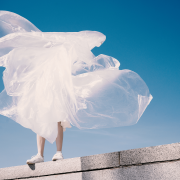 It’s National Recycling Week and everyone is talking about the big news announced yesterday – the news that REDcycle suspended soft plastic collection from Coles/Woolworths stores across Australia. Because of this, soft plastic will no longer be recycled, and instead will be heading to landfill for the foreseeable future.

REDcycle is the main post-consumer soft plastic collection program in Australia – the only one that collects on such a large scale. It was developed and implemented by RED Group, a Melbourne-based consulting and recycling company.

They have more than 2,000 drop-off points at Coles and Woolworths supermarkets around the country. According to the FAQ on their website, they’ve collected over 900 million pieces of soft plastic.

They estimate they collect up to 5 million items PER DAY, equaling 7000 tonnes per year.

Which is a huge amount when we remember that soft plastic really doesn’t weigh very much at all.

But for all this collected plastic, there needs to be buyers: companies who can use this plastic material to make products that they have a market for.

Close the Loop had apparently been transforming hundreds of tonnes of this soft plastic into an additive and binding agent for asphalt.

The only mass-use end product that REDcycle could find for their recycled soft plastic anywhere in the country was for roads.

Prior to the fire in June, REDcycle had faced an issue with one of their buyers, Plastic Forests, having a change in circumstance and stopping taking plastic from REDcycle in February 2021.

A week before the collection suspension in November 2022, their remaining buyer, Replas (who make garden benches, traffic bollards and play equipment with the plastic) stopped accepting the material, saying they had an oversupply and also that they are planning to phase out the material.

After the June fire, REDcycle had apparently been quietly stockpiling this plastic as they looked for other options. The announcement from Replas seems to have been the final straw, and soft plastic collections have been suspended nationwide.

Why the suspension of REDcycle’s soft plastic collection is not REDcycle’s fault.

We all want to recycle.

We all want to believe that recycling is a magical solution to the problem of waste.

And news like this reminds us that recycling is not magical. It’s imperfect, and reliant on so many external factors. From collection, transporting, sorting, processing, selling, re-manufacturing, there are so many steps and so many stakeholders.

But the suspension of the scheme is not REDcycle’s fault.

This program is run by one company, trying to provide a workable recycling solution for an entire nation’s single-use soft plastic waste.

Single-use soft plastic in volumes that have grown over 350% in three years.

Single-use soft plastic that in numbers was equating to 5 million items every single day.

And it’s estimated by Australia’s Department of Agriculture, Water and the Environment that only 13% of soft plastic is currently recycled.

It’s estimated only 22% of people even knew that they could recycle their soft plastics.

If everyone knew about REDcycle and did recycle their soft plastic, that would equal 38 million soft plastic items per day.

And just this one program, REDcycle, was trying almost single-handedly to reduce this single-use soft plastic problem.

There is no way we can lay the blame on them.

They saw the problem, and tried to do something about it.

But they didn’t create the problem.

The blame squarely lies in the system.

First of all, whilst the REDcycle program makes our plastic “go away” and makes us feel good that we are recycling, the fact is, it’s being make into asphalt and garden benches and traffic bollards.

It’s not being made back into plastic packaging. It’s going through a single cycle before becoming something that’s no longer recyclable. And these products are not something many of us want to buy.

Most of us take soft plastic to REDcycle at some stage. But how many of us are buying a traffic bollard or a garden bench?

We want to eat bread and crackers and biscuits, and we want to be able to recycle our packaging, but we don’t want to buy the products these items are made into.

It’s not true recycling if we’re not re-cycling the material into the same type of product. It’s downcycling.

However, the producers of plastic packaging love the REDcycle scheme because it puts the emphasis back to us – the shoppers – to do something about the packaging and recycle it.

The sellers of products in single-use plastic packaging love the REDcycle scheme because it looks like they are committed to sustainability via their support for recycling. Actually it’s us doing the work sorting and dropping off the recyclables, and REDcycle collecting and processing the material and trying to find markets.

Rather than look at their packaging, and their systems, and try to reduce their plastic use or change the way they do things, they shift the burden to us and make it our problem to deal with.

When a system like REDcycle fails we feel frustrated and angry and upset because we’re trying to do the right thing.

The REDcycle suspension is a wake-up call that we need system change.

And by “we” I mean society – governments, businesses, organizations and individuals.

Not everyone has access to bulk stores and re-use systems and options when it comes to avoiding plastic. That needs to change.

Whilst schemes like REDcycle are running, the plastic producers can continue with the status quo and tell us it’ll be okay as long as we recycle it.

It’s not okay for businesses to smother products in plastic and then expect shoppers and a handful of companies to bear the costs and effort associated with trying to deal with it.

Despite my disappointment in the suspension of the REDcycle scheme, I feel confident that this shake-up will be a good thing. It’s a wake-up call for companies to re-examine how they package their products, for stores to rethink how they sell their products (and whether they even sell the most over-packaged products at all), for governments to improve infrastructure and increase legislation, and for those of us with accessible low waste options who let some of our good habits slips in the last couple of years, to pick up where we left off.

We were never going to recycle our way out of this one. And this National Recycling Week, now that recycling is in the news for all the wrong reasons, we have an opportunity as a country to discuss the real solutions for reducing waste and transitioning to a truly circular economy.

Now we’d love to hear from you! How do you feel about the REDcycle collection suspension? Do you use REDcycle regularly, occasionally or do you somehow manage to avoid it altogether? Was it never even an option where you live? Are you someone who let some good plastic-free habits slip away over the past couple of years, or are you someone who simply never had plastic free options in the first place? Do you feel defeated by the announcement? Do you feel confident that this will force a change in a more circular direction? Do you think something else entirely? Please share your thoughts in the comments below!