Until about two weeks ago, I had no idea what a green smoothie was. I had on occasion seen other people drinking murky green drinks and turned my nose up, but nothing more. And I was sure it was going to stay that way, but somehow it didn’t. You know how you hear about something for the first time, and then all of a sudden it’s everywhere you go, everyone seems to be talking about it, it’s in the newspapers, on the internet… Well that’s how it was for me. Everyone seemed to be drinking green smoothies, or writing about it, or talking about it, or maybe even all three. And I’m a curious kinda girl, and I was intrigued.

This intrigue coincided with a few other things. Firstly, my boyfriend owns both a juicer and a blender from a previous life, and in the 15 months we’ve lived in our little flat they have been stored out of sight in the cupboard. We neither have the space nor inclination to keep things that could be put to much better use by someone else, and we’d already decided that we should dig them out, dust them off, give ’em a go and figure if they were worth keeping or whether they were going on Gumtree. So we were already set up for the green smoothie experiment.

Secondly, my boyfriend has been ill with a cold/flu virus for what has now been three weeks. He took the first few days off work as he couldn’t get out of bed, but as he started getting better he went back to work, and two weeks later he still can’t shake it off. Increasing our fruit and vegetable intake seemed sensible.

Thirdly, I make my own sourdough, which is absolutely delicious. The downside of this is that I have a tendency to have toast for both breakfast and lunch. Tasty, but not very nutritious.

So I decided that this week was going to be a week of green smoothies for breakfast. My boyfriend, as you can probably imagine, was underwhelmed, but duly trudged along with me to the Farmers Market on Saturday to stock up on kale and bananas. The challenge was on.

We tried our first one on Saturday afternoon. 3 kale leaves, 1 banana, 1 cup of water and juice of 1/2 lemon per person. Surprisingly, it was quite pleasant (drinkable at least!), although the green colour takes a bit of getting used to. (My brain kept trying to persuade me it was full so it didn’t have to drink any more, but my tastebuds were fine with it.) On Monday morning I used lime instead of lemon. Couldn’t really notice the difference. This morning I juiced an apple to replace some of the water, and the extra sweetness was much appreciated. The extra washing up was not. (I had to use the juicer as well as the blender.) Not only that, but I didn’t secure the lid properly so coated myself and the kitchen in finely ground apple.

So…do I feel any different? Well it’s only been three days. But there’s a definite smugness to knowing that you’ve drank four portions of fruit and vegetables before you’ve even gone out of the door in the morning! 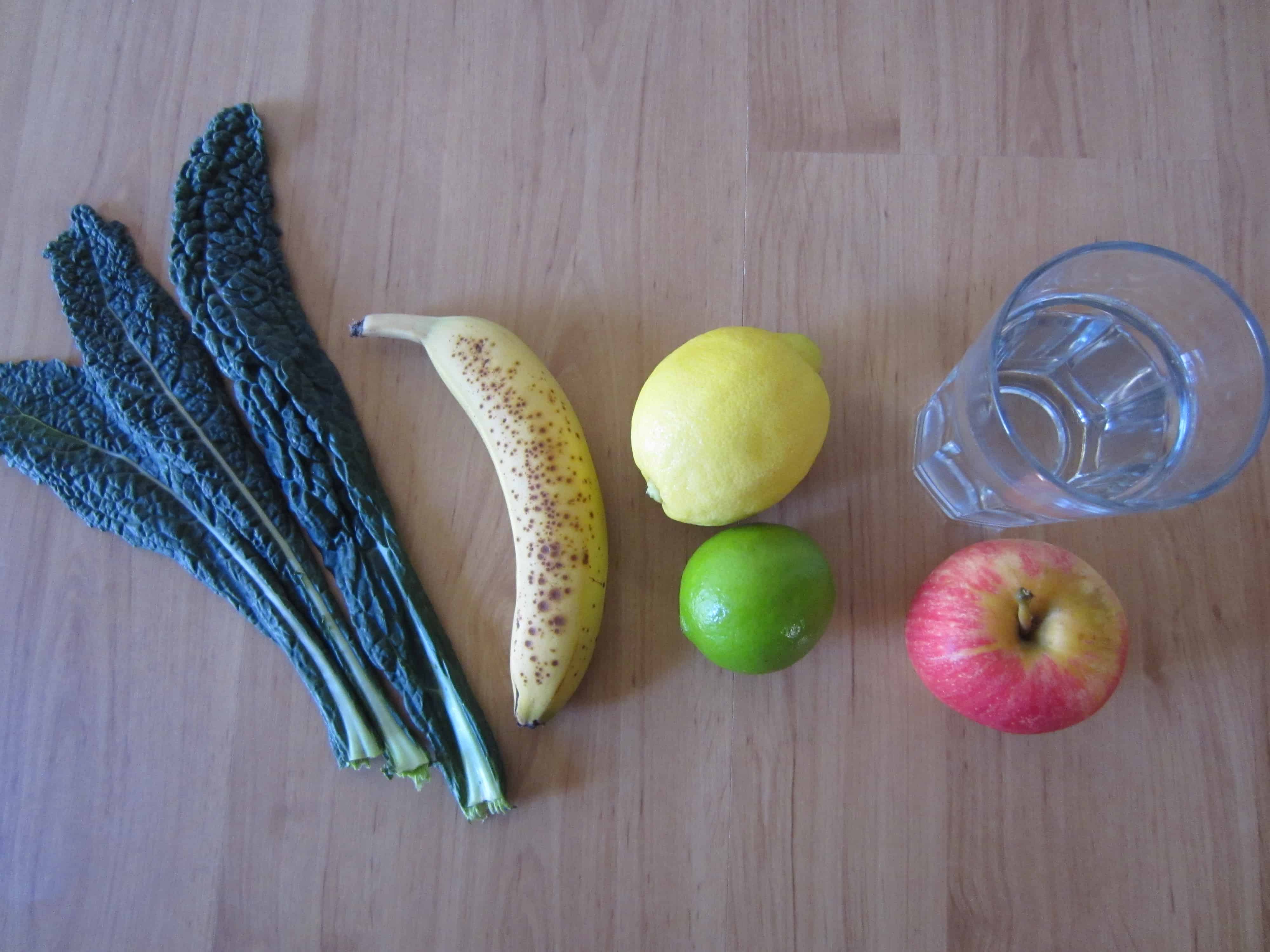 Ingredients for one green smoothie: three kale leaves, one banana, juice of half a lemon or lime, and 1 cup of water (or apple juice)