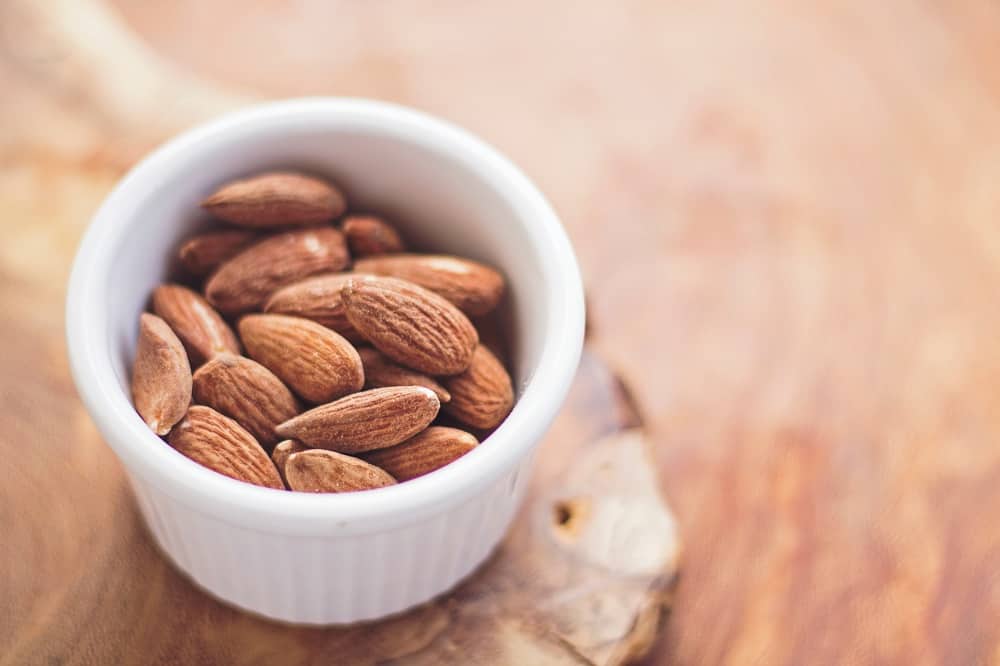 First almond milk and other plant-based milks are lauded as a healthy alternative to regular milk; the next thing is they are being hailed as environmentally destructive. I exclusively drink nut milk at home (I make my own) and when I first starting hearing these claims, I decided to look into it a little more.

I want to live as sustainably as I can, and I also want to understand as much as I can about where my food comes from.

Articles with headlines like “Almond milk: quite good for you – very bad for the planet” and “Your Almond Habit Is Sucking California Dry“, published by reputable news sources (in this case, The Guardian and Mother Jones respectively), make it easy to see why many people think nut milk is bad for the planet.

But these articles don’t tell the whole story.

Sustainable choices are rarely completely black and white. There’s often compromise, or prioritizing one aspect of “green” over another.

If you stopped at the headline, you’d think that almond milk is bad for the planet. I want to go beyond the headline, to find out what reasons they give, and explore the rest of the story. 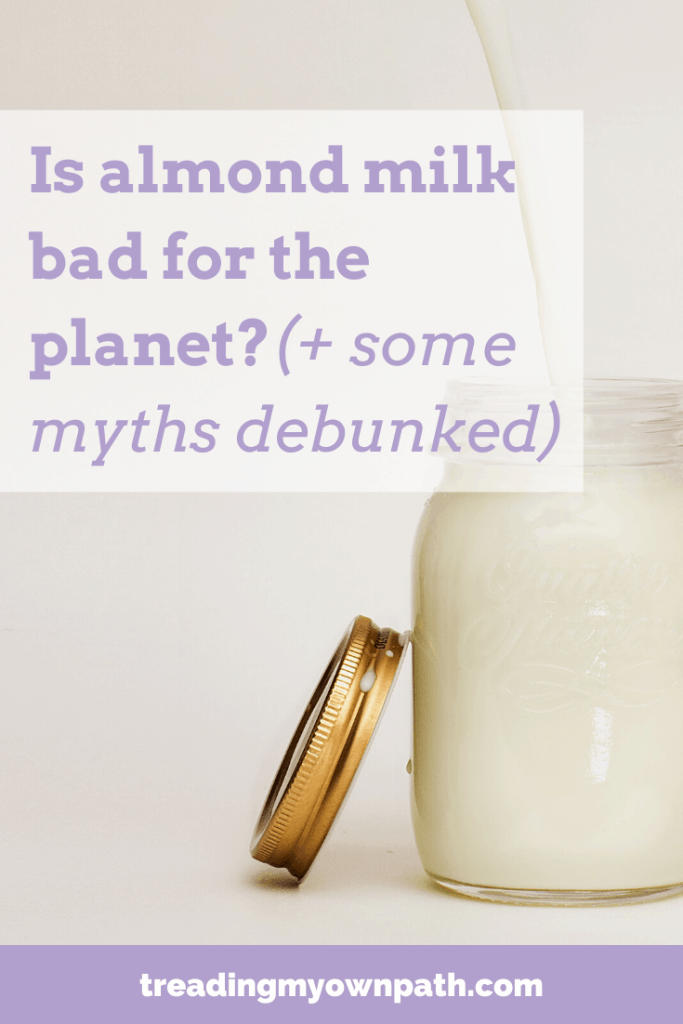 NB Statement quoted below were taken from this article by the Guardian.

The main environmental concern with almond milk seems to be the amount of water needed to grow almonds, coupled with the fact that most almond trees are grown in drought-hit California.

“It takes 1.1 gallons (4.16 litres) of water to grow one almond.” (The Guardian quoted this article, which stated where they obtained their data from: Mekonnen, M. M and Hoekstra, A. Y 2011.)

There are 92 almonds in a cup, which makes a litre of homemade almond milk. That means 1 litre of almond milk requires 384 litres of water to produce.

(Store-bought almond milk appears to have a much lower almond content, listed as around 2% of the total. Most brands do not list the number of almonds used per litre, but it is thought to be much less than homemade nut milks.)

“This isn’t to say cow’s milk, which takes about 100 litres of water to produce 100ml of milk, is more environmentally friendly”. (The Guardian quoted 250ml as requiring 255 litres; this source contains the research data.)

A litre of cow’s milk requires 1016 litres of water to produce.

It is very frustrating when environmental impacts are measured on one factor alone. For many companies, using plastic is considered a more environmentally friendly option than using paper or glass, as it has a lower carbon footprint and is cheaper to transport. But when you take into account reuse-ability, recycle-ability and nenew-ability, it is a different picture.

Talking about the environmental impact of almonds based solely on water usage is only part of the story. What about the fact that almonds grow on trees, which stabilise soil, add oxygen to the atmosphere and decrease soil erosion?

Compare this with dairy cows, which are big contributors to greenhouse gas emissions (methane), require huge swathes of land to produce feed, and contribute to soil erosion and waterways pollution. 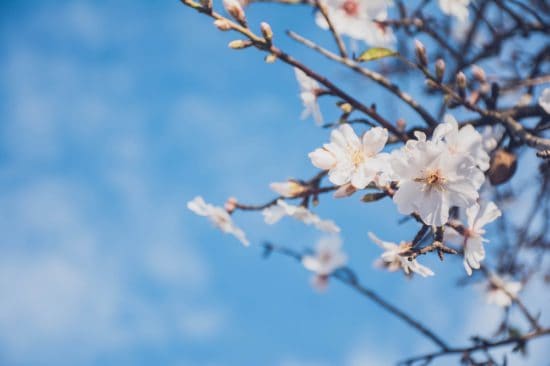 Almonds seem to be targeted because they are grown in California, which has been hit by drought in recent years.

“More than 80% of the world’s almond crop is grown in California.”

This means 20% is not. Australia is the second-largest almond producer. I exclusively purchase Australian almonds as they are local to me. All produce has a printed country of origin, even products purchased in bulk stores. I purchase all my nuts from The Source Bulk Foods (they have 33 stores across Australia), as they stock Australian almonds as well as other nuts from Australia.

Almonds are also grown in Asia, Europe and the Middle East. World production is 2.9 million tonnes, and the USA produces 1.8 million tonnes. There are a million+ tonnes of almonds not grown in the USA to choose from.

If low food miles and sourcing locally grown or produced food is a priority, and almonds don’t grow close to where you live, almonds might not be the best choice for you. 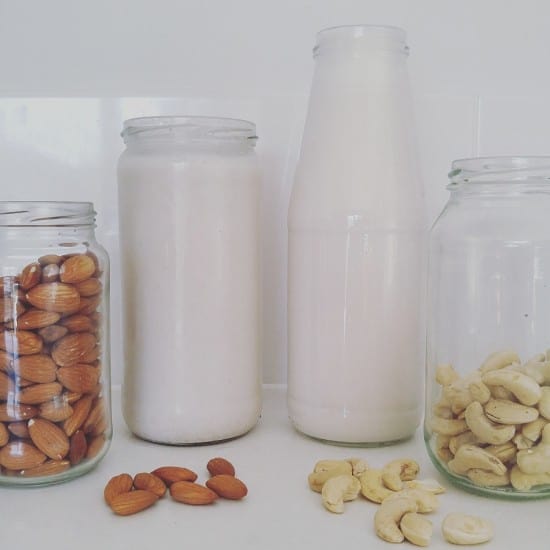 Does distribution even matter? Or is it more about scale?

They may not be blameless, but they seem to get more blame than they deserve.

California might have a lot of almond trees, but it’s an agricultural powerhouse, growing more than 200 crop varieties including almost all of America’s apricots, dates, figs, kiwi fruit, nectarines, olives, pistachios, prunes, and walnuts. It leads in the US production of avocados, grapes, lemons, melons, peaches, plums, and strawberries.

Dairy and livestock are considered far more water intensive than vegetable crops. Almonds use similar water to other nut trees (and 99% of America’s walnuts are also grown in California). “Fresh” crops like lettuce and broccoli not only need large quantities of water to produce, they need to be refrigerated and are often air-freighted to their destination.

Why do almonds get a bad rap, whilst all the banana bread bakers adding Californian walnuts to their loaves get not a single talking-to? 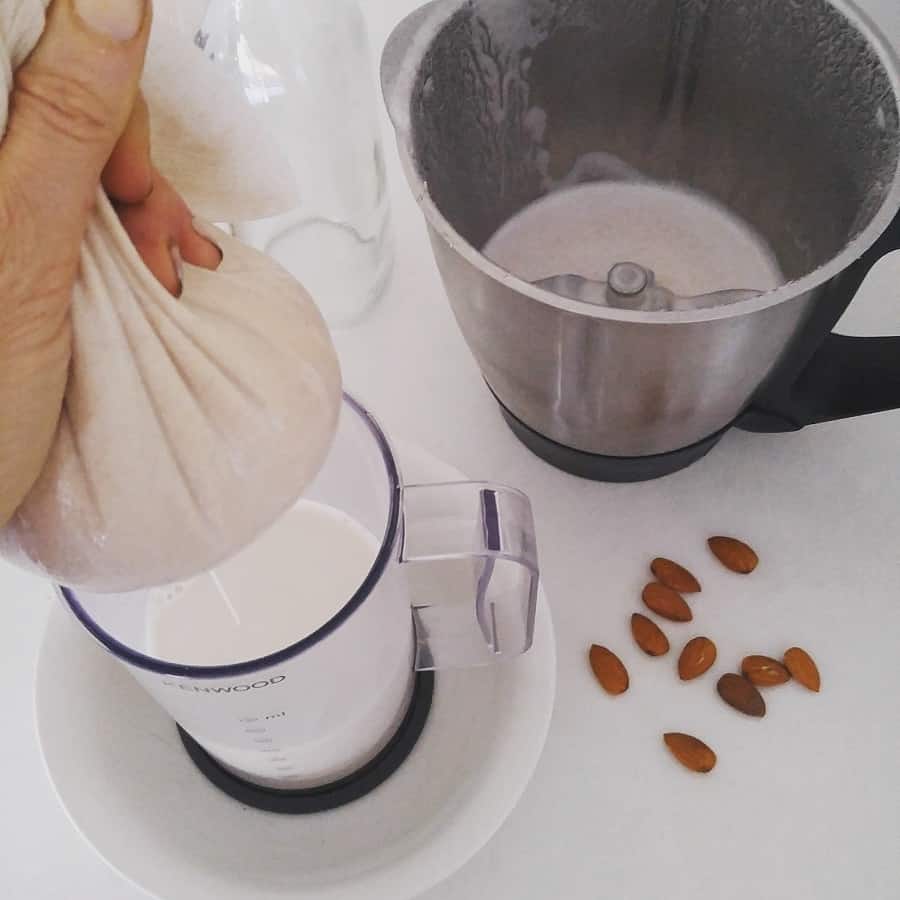 I can make my guesses, but I can’t know for sure. I do think that almonds (and almond-milk drinkers) are unfairly targeted. The issues go much deeper.

It is not the growing of almonds that is so bad for the planet. It is the mass manufacture of almond milk and the global shipping to stores worldwide that is having a negative environmental impact.

Shipping water all around the globe is crazy. Most of us wouldn’t dream of buying bottled water (assuming we have drinkable water coming from the tap), but carton nut milk is 98% water. It is virtually the same thing!

Then there’s the containers. Nut milk is usually packaged in Tetra Paks, and these aren’t as easily recycled as their manufacturers would like us to think they are. Theoretically recycable is not the same as actually recycled in our town/municipality/state.

Recycable or not, they are designed to be used once only and not refilled.

Buying carton nut milk, especially one that has been manufactured overseas, is not an environmentally sound choice. From a transport (and energy) perspective, dairy milk has a lesser impact as demand is typically for fresh milk, so it is sold locally.

The great news is, it is really easy to make your own almond and other plant-based milks. I typcially make my own cashew milk and almond milk, but you can use any type of nuts. I’ve made macadamia milk, walnut milk, and brazil nut milk. I’ve even made seed milks! Experiment, and find your favourite. 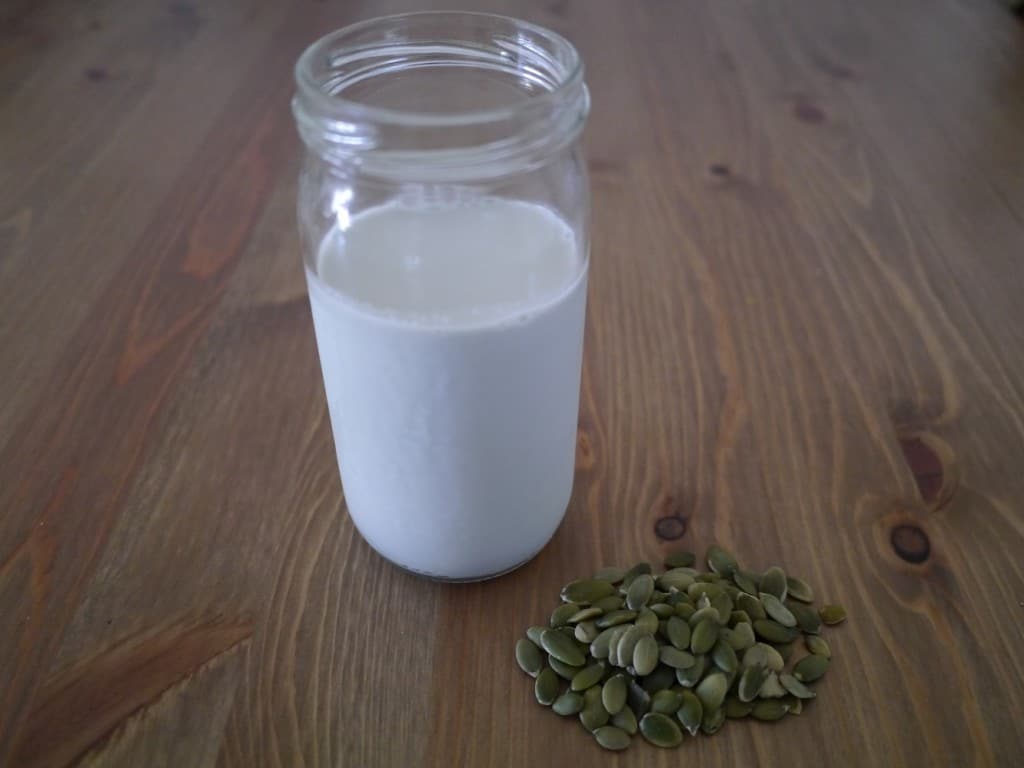 Yes, seed milk is a “thing”. And they are surprisingly delicious! This one is my favourite, pumpkin seed milk.

What is the Most Environmentally Sustainable Milk Option?

At it’s heart, I don’t think this is about almonds. Or dairy cows.

The real issue here is industrial agriculture in a fragile, sensitive environment, and pursuing profit at the expense of the planet.

If you can, support local farmers, and buy products produced in your local area – or as close to your local area as possible. If you choose to drink nut milk, consider buying nuts and making your own. Oat milk is another (nut free) option.

If you’d rather buy packaged plant milk, look for one that has been manufactured locally (even if the ingredients are from overseas). Coconuts require far less water than other nuts, and grow in climates where rain is plentiful.

Of course, we could refuse milk entirely, dairy, almond or otherwise. We could drink black coffee. We could just drink water, which we harvested from the roof in our rainwater tank. We could… but will we? There’s the perfect world, and then there’s the real world – the one we live in.

I think it’s important to ask questions, and to try to understand where our food comes from. I think it’s valuable to understand why we make the choices we do. Sometimes our choices are less than ideal. It isn’t about being perfect. It’s about trying to do the best we can. 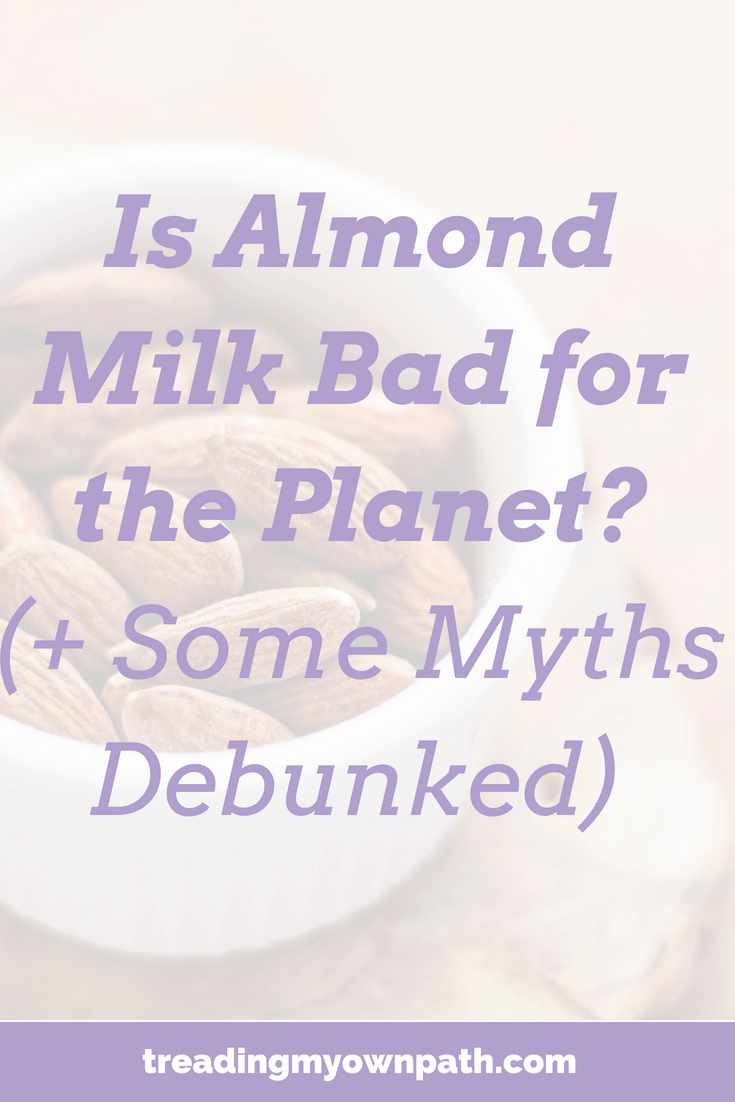