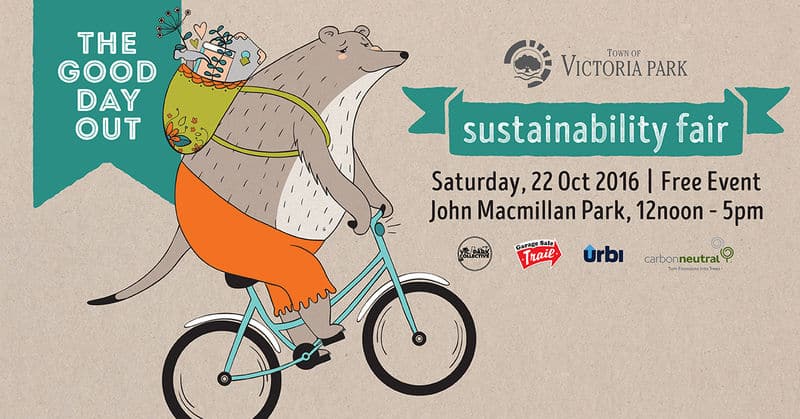 When I found out that my local council were planning a new community event with a focus on sustainability, and looking for community members to join the Organising Committee, I jumped at the chance. I wanted to do my bit. A big part of any event is waste, and waste minimisation happens to be my favourite topic! How exciting to showcase what can be done in my own neighbourhood? :)

My objective was to run a zero waste event. By zero waste, I meant no plastic (compostable, biodegradable or otherwise), no sytrofoam and no single use packaging. Whilst everyone was in agreement to ban plastic bags and balloons and other single use items from the day, the idea of banning single use packaging altogether was something very new to the council.

Could we provide reusables? Where would we source them? How would it work? Would we manage demand? Who would wash them up? What about health and safety? Would vendors get on board? How would the public react?

I put together a proposal for how I thought it could work, based on my experience with running other events, and the experiences of others I knew who’d run similar events.

Fortunately, the rest of the team were up for the challenge, and so I got to work planning and scheming :) 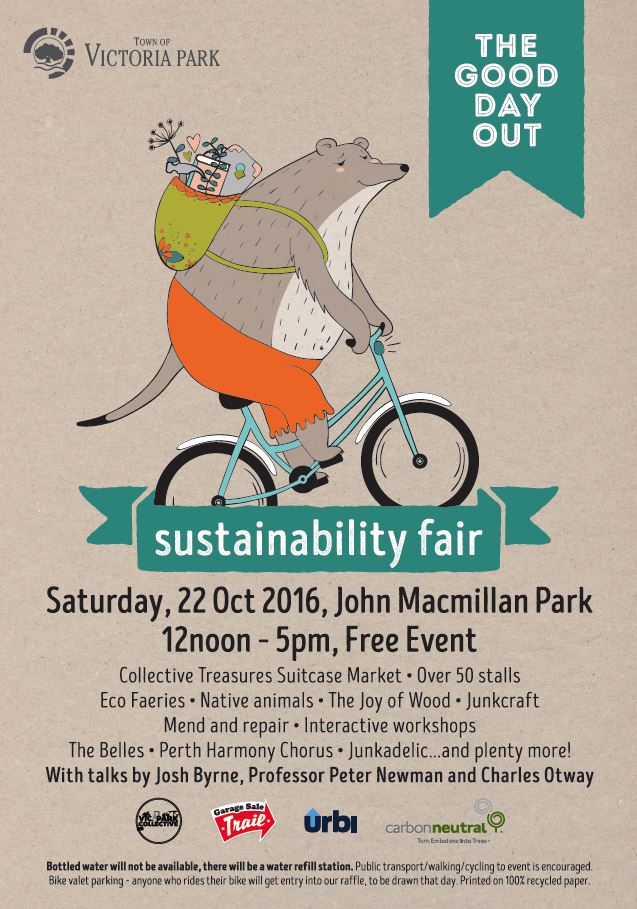 All of our team had different roles and responsibilities with planning and running the event, and my responsibility was sustainability and waste. There were lots of other great sustainability initiatives in other areas (it was the overarching theme, after all) but my major focus was waste minimisation.

Our event was held in a local park, outdoors, with power and water available.

The first step was to outline our sustainability criteria, thinking about what would be practical and achievable. One of the key components was running a washing up station, which meant that we could request that all vendors used reusables rather than disposable packaging. Stallholders and food vendors who applied to attend had to agree to comply with our sustainability policy.

Here are some of the criteria for stallholders at the event:

Whilst we asked that stallholders comply with our rules, we also provided the following to make it easier for them:

In addition, we made the following provisions:

On the Day: a Zero Waste Event in Action! 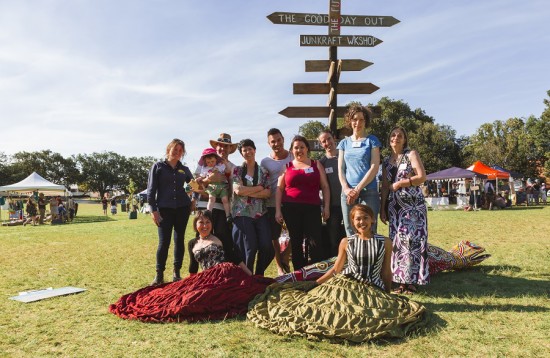 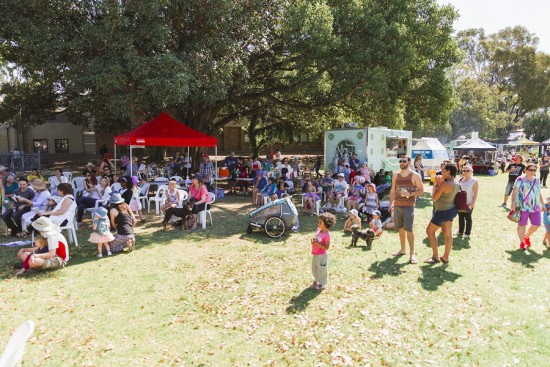 Our washing up station positioned in between the stage seating area and the food vendors, under a lovely big tree. Photo credit: K.A DeKlerk Photography

I’d love to tell you that it was perfect, but of course it wasn’t. There is plenty to improve on next year! For all the shortcomings, the day did work well, and the amount of single-use packaging we saved from landfill was tremendous.

One frustration was a food stall added last-minute to the event due to a cancellation. There was no opportunity to speak to them in detail about crockery before the event, and the products we hired weren’t suitable. They used cardboard-style compostable trays, and we collected these to compost.

The juice vendor were at one stage handing out plastic straws, and plastic Biocups. They removed the straws when asked: they even put reusable metal straws on sale instead. They denied giving out the Biocups (I saw the Mayor put a plastic Biocup with a plastic straw that he’d been drinking from in the recycling bin – fails all round!) but did remove them from display after I mentioned it. They handed out a few disposable coffee cups too, despite having our mugs.

But overall, support from vendors, volunteers and the public was great. Looking at the bins at the end of the day and seeing them not even half full made my heart sing! And once everything was packed up, there was barely any litter in sight. Maybe not zero waste, but definitely near-o waste :) 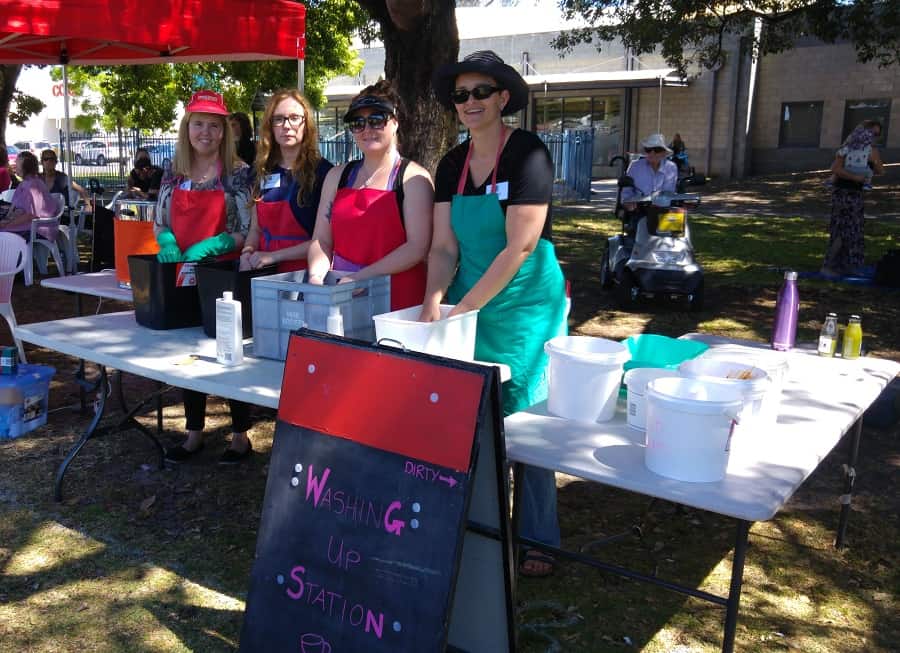 The washing up station with some of the morning volunteers. The buckets on the right were for food scraps and compostable waste, and soaking cutlery. Almost out of view on the left hand side (behind the volunteers) is the table behind is the hot water urn. The final rinse uses sanitizing solution and water above 72°C to meet Health and Safety guidelines, and everything is air dried. 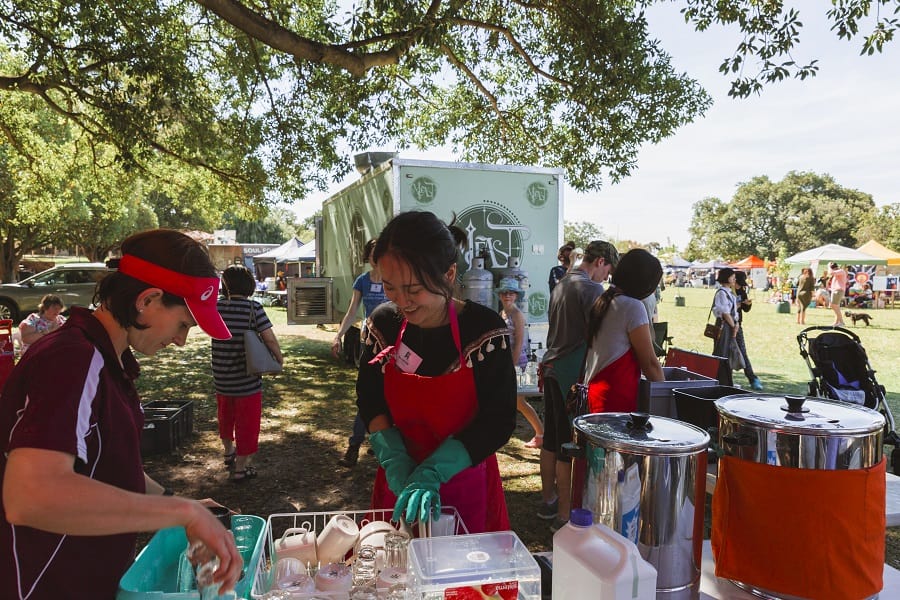 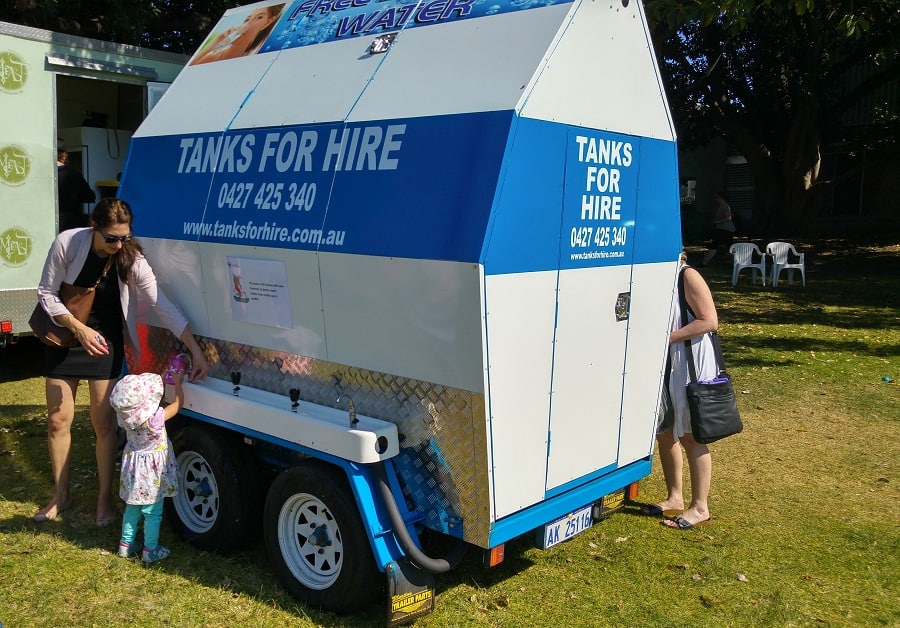 The water refill station. There are water fountain attachments and taps for patrons to refill their own water bottles – no single use plastic required! 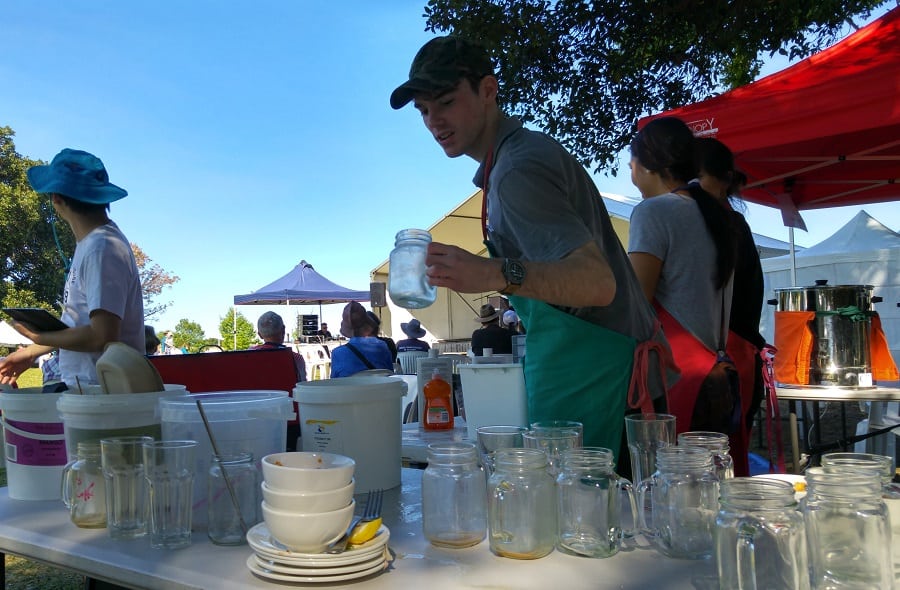 Dirty dishes at the washing up station. The hot water urn, which is a key part in sanitizing the dishes, is to the right of the image. The straw you can see is a reusable metal one! 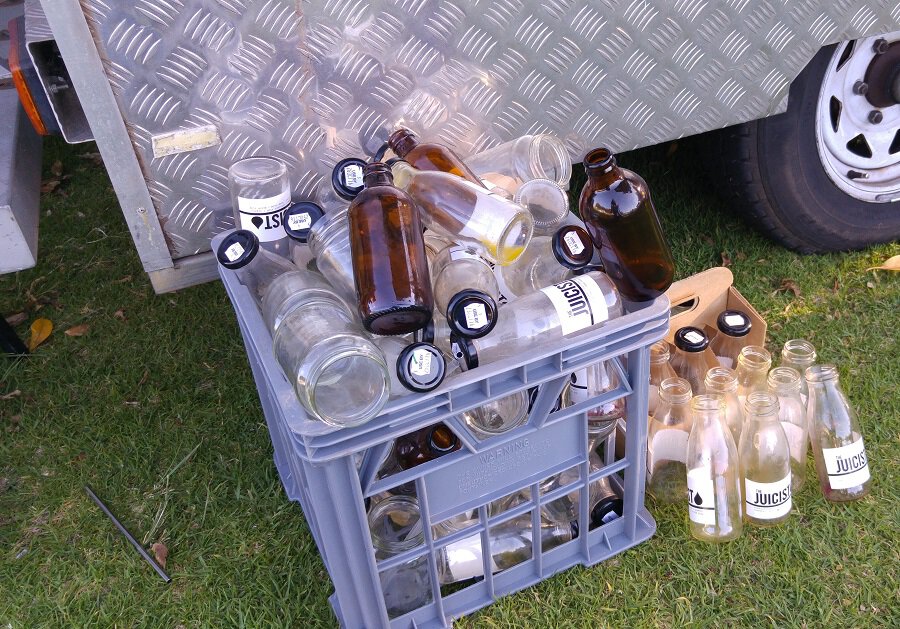 The juice vendor sells juice in returnable glass bottles, which they refill. I personally fished 30 or so bottles out of the bin to return to them. More signage next year! (The straw on the ground is a metal one.) 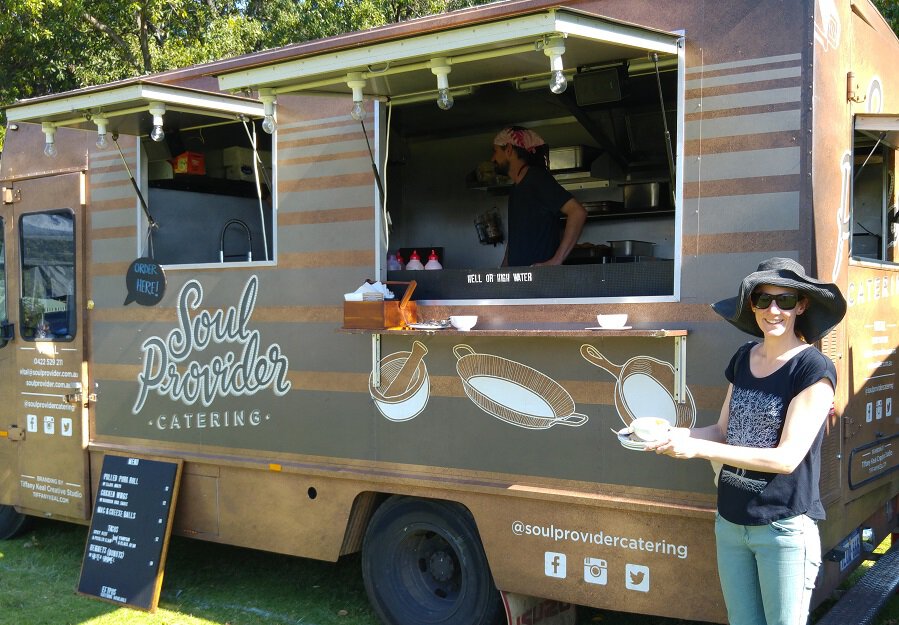 Collecting dirty dishes from the food vendors. Soul Provider were absolutely amazing in supporting us, using only our reusable dishes and never falling back onto disposables. Plus they never stopped smiling! :) 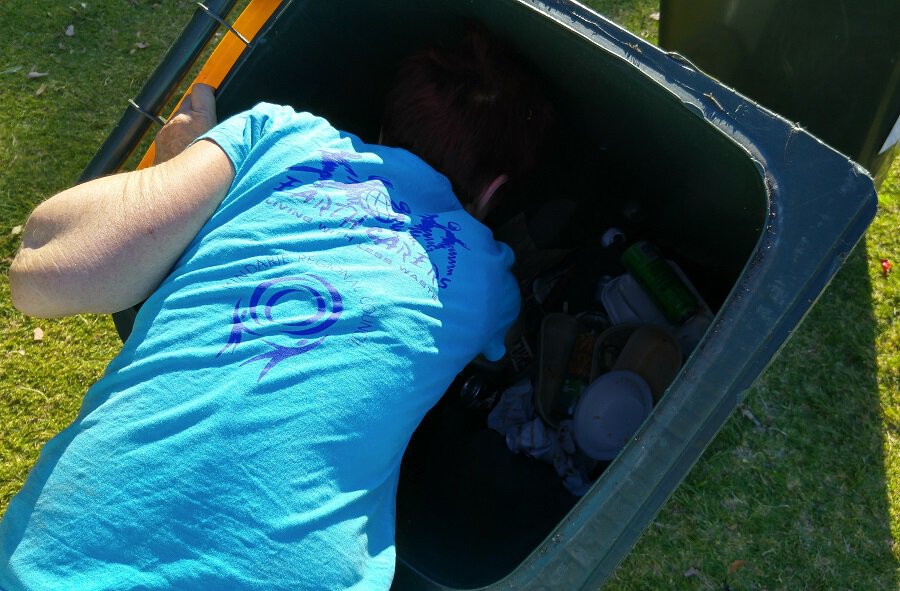 Rummaging through the bins at the end of the day. This was one of our two recycling bins. They were 240 litres, and were not even half full. We managed to remove some glass bottles for reusing, and removed all the compostable cardboard trays (which had food on them) for composting. 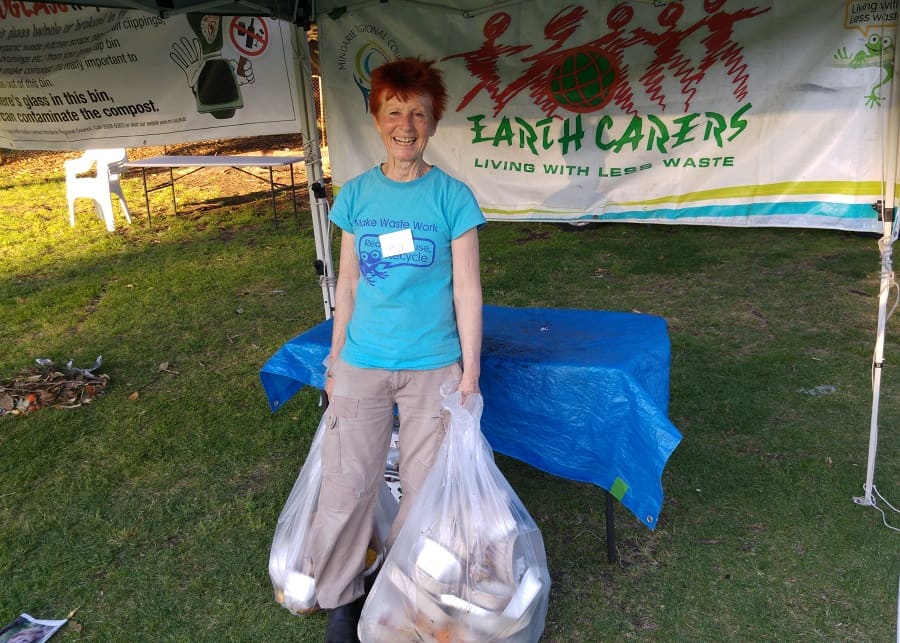 This is Peg, with all of the compostable waste we collected. We had a ‘Compostable Waste’ bin and also collected food scraps at the Washing Up Station, but we still retrieved a bit from the other bins. Yes, it is in plastic bags. The bins had already been lined when we came to empty them. I assure you Peg will be reusing these bags many times!

What could have been better:

I’m hoping to put together a “How to Plan and Organise a Zero Waste Event” resource in the near future, so if this is something that you’re interested in finding out more about, stay tuned!

Now I’d love to hear from you! Have you ever been to any zero waste, plastic-free of low waste events? What initiatives had they adopted, and how did they work? Was there anything that didn’t work quite as well as it might? Anything you’d have like to see improved? Have you run your own low waste events? What experiences (good or bad) do you have to share? What have been your biggest successes, and your most dismal failures? Any lessons learned? Are you hoping to organise a zero waste event, but not sure where to start? Did you come to the Good Day Out? What did you think? What were your favourite bits, and what could be improved on next year? Anything else you’d like to add? Please share your thoughts and experiences in the comments below! 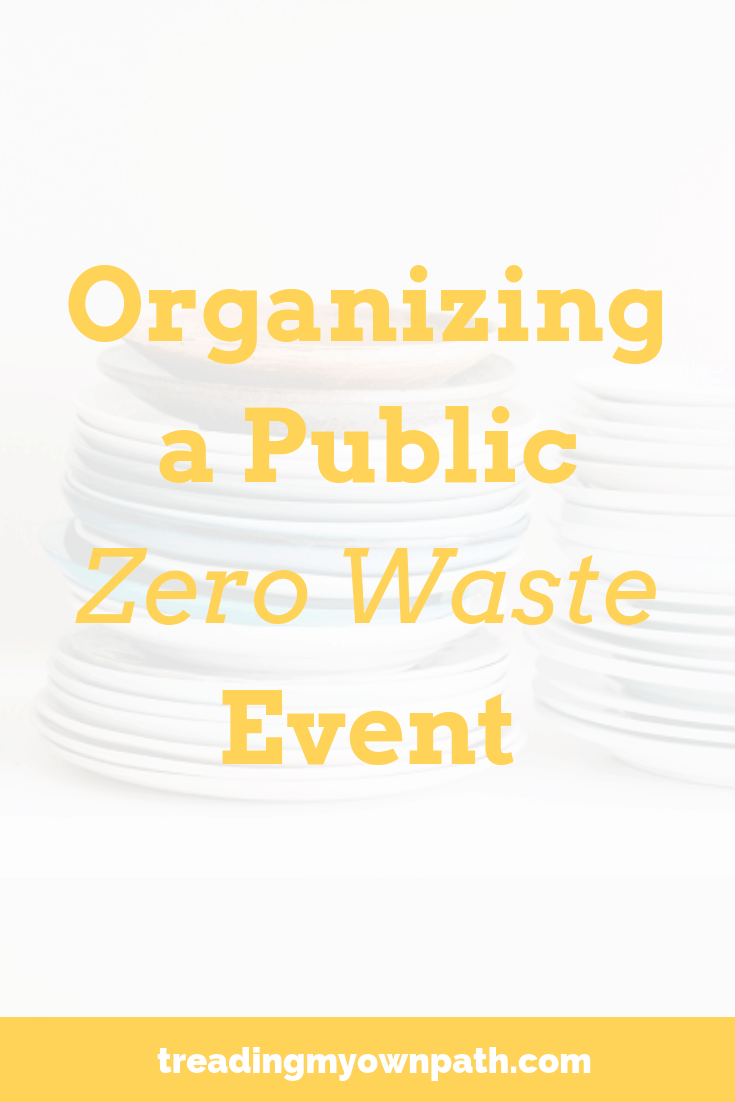 My Top Ten Documentaries To Get You Thinking (and Questioning)