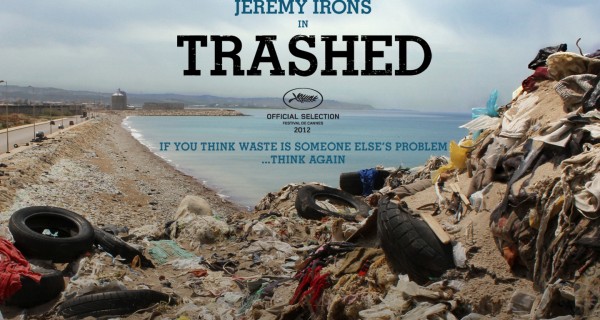 On Tuesday night I went to a movie night hosted by Transition Town Guildford for the documentary Trashed. Released in 2012 and featuring Jeremy Irons, Trashed explores the extent of the global waste problem, and the consequences – including pollution in beautiful and uninhabited environments, the health risks to animals, humans and children, and the contamination of the oceans.

When I say ‘explores’, this movie does not just skim the surface. It gets right in there. It’s a powerful film, and it gets the point across that we need to change the way we do things. If you’re not convinced before the film, you won’t be left with any doubt afterwards that waste is a serious problem – and it affects all of us.

Featuring farmers from France and Iceland, hospital works in Vietnam, and waste disposal sites in the UK, Lebanon and Indonesia, it is clear that this is a global issue.

I loved the message, the depth of the science and the exploration of the facts. It was hard-hitting and some people, particularly those who aren’t already aware of the issues surrounding waste may find it pretty confronting. They tried to end on a positive note, bringing the movie back from the feeling of impending doom, with just enough positivity for the audience to leave without feeling like it was all too hard and all too much. But only just.

My only real criticism was the lack of exploration of the issues surrounding recycling. Clearly there wasn’t space to cover everything, but I felt that plastic recycling in particular could have been further addressed. At the end of the film they show huge bales of plastic waiting to go to China (from San Fransisco) for recycling, but no mention is made of the issues of transporting huge amounts of plastic across the ocean, nor the hazardous processes involved with recycling the plastic in countries with less stringent safety regulations.

Particularly after they talked in length of the dangers of burning waste, I felt this was a glaring omission.

The other interesting point is that this segment of the film was recorded in 2009. Back then, China was a huge buyer of plastic waste, but the plastic shipments were often contaminated with non-recyclable plastic and other debris, and in February 2013 China has cracked down on this with Operation Green Fence, meaning all plastics must be washed and uncontaminated. All shipments are inspected on arrival, and if they are contaminated they are sent back, with the sender incurring the cost. In the first 3 months, 7600 tons of waste were rejected.

I’d definitely recommend watching it, but if you’re new to the issues of waste, you might find it gentler starting with the Clean Bin Project or my all-time favourite, Bag it!.

If you’re interested in hosting a screening of your own, you can find the details on the Trashed website.

Have you seen this movie? What did you think? Did you find it motivating, or did you think they stepped over the line into Doomsday-ville? If you haven’t seen it, what were your thoughts after watching the trailer? Leave me a comment; I’d love to hear what you think!

How to Get Candle Wax out of Glass Jars

The Scandalous Plastic in Tea Bags – Who Knew?
Scroll to top