As someone who tries to live a low waste, less stuff lifestyle, it won’t surprise you that I’m a cheerleader for borrowing. (I’m not sure that there’s a single mantra for low waste living, but if there was, ‘use what you have’, ‘make do’ and ‘borrow don’t buy’ would probably be hot contenders.)

It’s no secret that I’m a fan of not buying stuff. And when I do need to buy stuff, I almost always look for second-hand first. (Depending what it is. I’m a fan of brand new underwear, for example.)

But generally, before I even think about buying, I ask if I can borrow it instead.

Recently, I repainted my office. I managed to borrow paint trays, a brush and rollers from one neighbour, and a stepladder from another neighbour.

(I’d already borrowed some filler and sandpaper from my brother-in-law to patch up the existing holes prior to painting.)

I also enrolled in a sewing course (it’s only been on my to-do list for ten years) and discovered that if I want to sew, I need access to an iron. Not having an iron, I borrowed one from a third neighbour.

All this borrowing got me thinking.

Is it always appropriate to borrow things rather than buy them?

When (if ever) is it better to buy things?

Who is it best to borrow things from?

If we are borrowing things, what is good borrower etiquette?

As someone who’s reduced their ‘stuff’ (and therefore used less resources) from borrowing rather than buying, as well as not spending money on stuff I didn’t really need to own, and as someone who doesn’t always get it right (my neighbour had to text me to ask for her iron back, oops), I thought I’d share my thoughts on borrowing, how to do it better, and when to know that buying might be best.

A low waste guide to borrowing stuff: 7 tips for being a better borrower

1. There’s no need to feel guilty or embarrassed about asking to borrow something.

For some of us, borrowing stuff isn’t something we feel embarrassed or guilty about. As an inherently practical person, it just seems logical to me that if I need to use a thing, and you have that thing and aren’t using it, well why wouldn’t I ask to borrow it?

But for others, it might not be something that comes naturally to us. Maybe we were brought up to think that borrowing stuff is bad, or implies that we are poor, or is somehow imposing on others.

The only way we can change our thinking around this is to take a deep breath, and start asking to borrow stuff… and see what happens.

In my experience, most people own things that they don’t use all the time, and they are perfectly happy for these things that are just sitting there to be used by others (especially people they already know).

I know that if I am able to lend things I own to others, I feel good that the item it getting extra use rather than sitting idle. Most people I borrow things from seem to feel the same.

If someone really doesn’t want to lend you something, they can say no. If they say no, accept that as the answer, don’t push it, and see if you can borrow from somewhere else.

I don’t want to impose on anyone, or for anyone to lend me something when they really don’t want to, but I have to trust that as grown-ups, people are going to tell me ‘no’ if they don’t want me to borrow something, and therefore if they lend something to me they’re happy to do so.

It’s worth remembering that a ‘no’ one time doesn’t mean a ‘no’ always. People will always be less likely to lend you brand new stuff or stuff they need to use themselves, but stuff gets old and stuff that’s in constant use gets shelved.

It will also depend what it is and how long you need it for – you’ll be far more likely to be able to borrow an iron for a few hours than a car for a fortnight. But it never hurts to ask ;)

If you borrow something from someone, here are a few simple guidelines to making it as painless as possible.

This isn’t to say that we should only lend things to people who can afford to fix them if they break. We have to make our own judgments about what we lend, who we lend to and how we think they’ll treat our stuff. Most stuff doesn’t break, and most people treat stuff with respect.

I’d rather be out of pocket having to fix a couple of things I’d loaned out in my lifetime, than never lend stuff to people who need it because there’s a small risk I’ll lose a few dollars.

4. Situations when it’s better to borrow.

Everyone has different needs and circumstances, but for me, these are situations when I borrow rather than buy:

5. Situations when it’s better to buy.

For me, buying something rather than borrowing it is about much more than whether I can afford to buy the item. Most things I borrow tend to be low-cost, because it’s not just about the money.

In my mind it’s as much about not wasting resources (not buying something I’ll only use once that somebody else already owns), and practical considerations (I live in a city suburb where I have a good network of people to borrow from, plus on a particularly neighbourly street, in a country where a lot of people have too much stuff, and my home is relatively small) that influence my choice.

Here’s a list of when I prefer to buy:

6. Borrowing can take many forms.

We can even hire stuff – yes we have to pay, but it’s a fraction of what it might cost us to buy the item, and we don’t have to worry about where we will store it afterwards, or deal with ongoing cleaning and/or maintenance.

Being a part of the Buy Nothing project, where you join a single group in the neighbourhood where you live and can gift, receive, lend and/or borrow stuff, no strings attached, is a great way to meet others in your neighbourhood and build those networks.

I’ve borrowed and lent many things via our local group, as have many others.

Often they are not people I know (at least, not at first), but people I might have met in the past, and/or we might have mutual friends, so it’s not totally random.

7. Try to give as much as you receive.

The final thing I’d say about borrowing, is that it’s not about “getting the most amount of stuff for free”, and the more you can give back, the better the system works and the better you feel. That said, we all have points in our lives when we are more in need.

You might not be able to give anything back now, or directly to the people who’ve lent you things. But in the future you’ll probably have an opportunity to give something back to someone. When the time comes, try to be as generous as you are able to be.

Giving doesn’t always have to be “stuff”, either. It can be the gift of skills, or the gift of time. In our local Buy Nothing group we’ve had a member offer up doing odd jobs for people, another offering to do pick-ups of large items with his vehicle, and people volunteering for dog walking.

Sharing is a good thing. It reduces demand for new resources, connects us with our neighbours and friends and limits the clutter in our homes. And borrowing is a necessary part of sharing. Next time you need something, before you head to the store, ask yourself, is it possible to borrow it instead?

Now I’d love to hear from you! How do you feel about borrowing? Are you fearless in your requests, or do you feel uneasy about asking others to borrow stuff? Are there any amazing ‘Libraries of Things’ where you live? What’s the best or most random thing you’ve ever borrowed? Anything else to add? Please share your thoughts in the comments below! 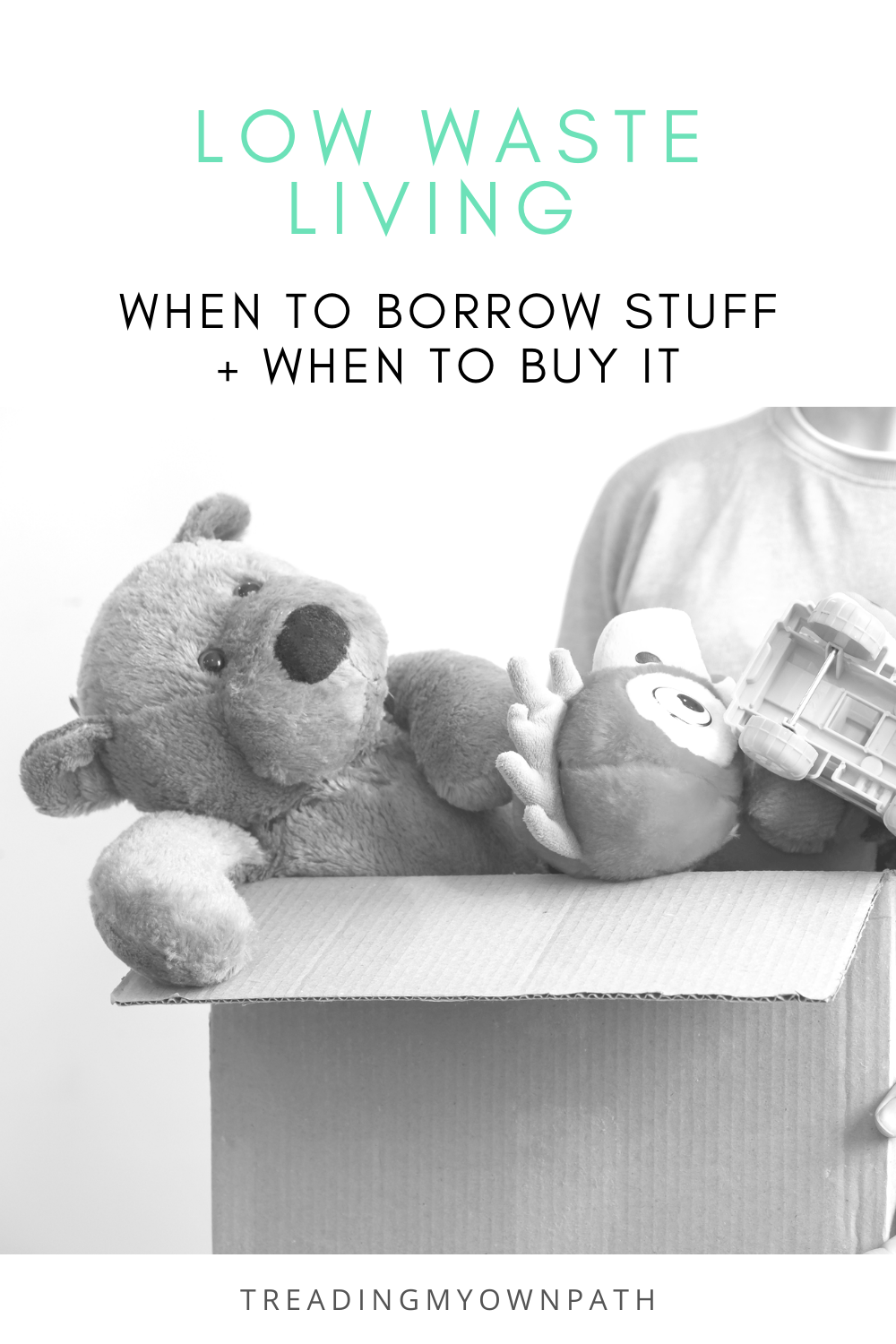 Seven ways I’m retrofitting my house for energy efficiency in a changing...