When I started my own ‘less waste’ journey back in 2012, there were very few people talking and writing about reducing plastic or living zero waste, Instagram was barely a platform back then, and #zerowaste was definitely not a hashtag. (In fact, were hashtags even a thing in those days?)

Since then both the plastic-free and in particular the zero waste movements have grown so much. Keeping your annual waste in a jam jar had its moment (although that ‘trend’ has long since passed – and I think that’s a good thing), journalists and magazines began to feature stories about people reducing their waste, blogs and social media channels on the topic exploded, and mainstream TV programmes even began talking about the issues and solutions.

Awareness has exploded – is there anyone who hasn’t seen the video of the turtle with the straw in its nose, or the skeleton of a bird whose stomach was filled with plastic?

But then capitalism caught up. The hashtag #zerowaste became a marketing term to sell things, and businesses lined up to sell plastic-free products and invent reusables that probably didn’t actually need inventing.

And then there was Covid-19. Bulk stores closed or were forced to pre-package their items, reusables were discouraged or outright banned, legislation such as bag bans were reversed, and single-use plastic (takeaway packaging, face masks) seemed to be taking off again.

And on top of that, all the chaos and uncertainty and stress made it a lot harder to keep up with sustainable habits and definitely harder to embrace new ones.

If there was a year that was difficult to be zero waste or plastic-free, it was 2020.

Not to mention, there are plenty of other issues facing our society. Waste is like an on-ramp to understanding all of the other things we could be doing. For some people who started out interested in zero waste or plastic-free living, this has meant moving to talking about climate change, challenging corporate culture, pivoting to focus on social and environmental justice, embracing activism or working in other areas.

As our understanding of zero waste and the wider issues broadens, we evolve.

Once we’ve embraced change in our own life, it’s only natural to start looking at what else we can do and where we can invest our energy (if we have any to spare). Sometimes our priorities and focus shifts away from plastic-free and zero waste, but even where they don’t, the conversations around these topics change.

They have to, if we are to continue making progress.

As I said at the start, I don’t think the zero waste or plastic-free movements are going away. But I do think they are changing. Here are my five predictions for 2021.

Back in 2012, barely anyone had heard of a bamboo toothbrush and plenty of reusables were yet to be invented. Fast-forward to 2021 and businesses are falling over themselves to sell us more ‘sustainable’ stuff, including plenty of things that we never even knew we needed (spoiler alert: most of the time, we don’t).

That’s not to say swaps aren’t a valuable part of living with less waste. They are most definitely useful, and the right ones (what’s ‘right’ of course, if different for everybody, but it generally means things that actually get used, and often) can really help us reduce our waste (and carbon) footprint.

It’s just that there’s so much less need to talk about them now – in part because everybody already has been talking about them for several years. They will always be a part of the conversation, but they’ll no longer be the centre of attention.

We might want to change the world, but in 2021 more than ever, there’s a focus on ‘think global, act local’.

Maybe that’s because most of us can’t travel anywhere. Maybe it’s because being forced to stay at home for the majority of 2020 has made us realise how important it is to have good neighbours, stronger local connections and a resilient community.

Maybe it’s because it’s much easier for us to have a positive impact on our local community through our actions than it is to ‘change the world’.

Whatever our reasons, good community connections are an important (if underrated part) of low waste living. From joining community gardens to neighbourhood network groups to gifting economies like Buy Nothing, and from donating to the local food bank to picking up litter to supporting on-the-ground groups doing good work where we live, there are so many ways we can get involved and make a difference.

We’ll definitely be having a lot more conversations about this in 2021.

3. More diversity in the voices talking about the issues and sharing of perspectives.

For a long time the zero waste movement was dominated by white women (in terms of media coverage and influence). And this isn’t to say anything negative about those voices in themselves – only that there was a extreme lack of diversity (and therefore a lack of differing perspectives, lived experiences and knowledge) in the movement.

And all good movements need diversity and representation in order to thrive.

This began changing significantly in 2020 after the death of George Floyd and the subsequent Black Lives Matter movement when both individuals and businesses started paying attention to this lack of diversity, and doing more to amplify other voices.

(It’s not that non-white or non-female voices didn’t exist, only they weren’t being given the same platforms and opportunities to speak out.)

In 2021 there will be a lot more inclusiveness in the zero waste and plastic-free movements, with different voices being heard and non-white people participating fully in – and leading – the conversations. And they will be much better conversations because of it.

If you notice that the people you’re following and listening to only fit a single demographic, 2021 is the time to diversify and add some new perspectives.

Greenwashing includes companies printing misleading claims on their products, using terms that have no clear and defined meaning (like ‘eco-friendly’ or biodegradable – here’s a guide to what biodegradable and compostable actually mean) or even printing green leaves and recycling symbols all over their packaging so we think they are environmentally responsible.

Greenwashing means companies telling us, the user, that we need to ‘recycle our products responsibly’ when they do not pay for or support infrastructure to make it possible to recycle these materials (theoretically recyclable is not the same as a actually recycled). Companies trying to shift the responsibility to us when it is their design choice to create single-use items and waste is greenwashing at its finest.

Greenwashing also means virtue signalling by companies – the practice of publicly declaring their moral and ethical commitments and concern for people and planet, but they are only surface deep. Scratch further and there is little meaningful action to support these claims.

In short, these businesses are built on unjust and exploitative systems that no amount of tokenism will fix.

An example might be a billionaire-owned clothing company producing billions of fast fashion items every year intended to be worn once or maybe twice, made by people who do not receive a fair wage, and sold in stores by people being paid a minimal wage, with the whole business model built on the idea of shoppers consuming more and more of their products – and then saying that they will help us recycle, which does nothing to stem the flow of clothing into an already saturated market.

(H&M, I’m looking at you. You might not be the only one, but you virtue signal the loudest.)

In 2021 we are going to see a lot more greenwashing, but we are also going to get a lot better at spotting it, and we will see a lot more people calling these practices out.

5. More individual activism, talking about the system failures and trying to hold companies to account.

The more we learn about plastic and waste, the more we realise that our individual swaps and habits will only take us so far. Now I’m the first person to tell you that individual actions matter , but if we want to bring about change we also need to change the systems that cause the problems.

In short, we need both.

It’s not possible for everyone to do both. But there are people that are fossicking through bins and calling out companies and drawing attention to corporations destroying stock or supermarkets binning food rather than donating it, and it is important that we learn these truths and amplify this work.

Big corporations tend to want us as individuals to think that it is solely on our shoulders to reduce our footprints and stop climate change. It’s not. With a simple change in policy these big brands could make a huge difference – but they won’t until the pressure mounts.

In 2021 there will be increasing calls for companies to be held to account for their actions.

So yes, the zero waste and plastic-free movements are changing, and the conversations are shifting.

And (greenwashing aside), this can only be a good thing.

Now I’d love to hear from you! How have you noticed the zero waste and plastic-free movement and conversations shifting over the past twelve months? What are your predictions for 2021? What would you like to see more (and less) of? Anything else you’d like to add? Please share your thoughts in the comments below! 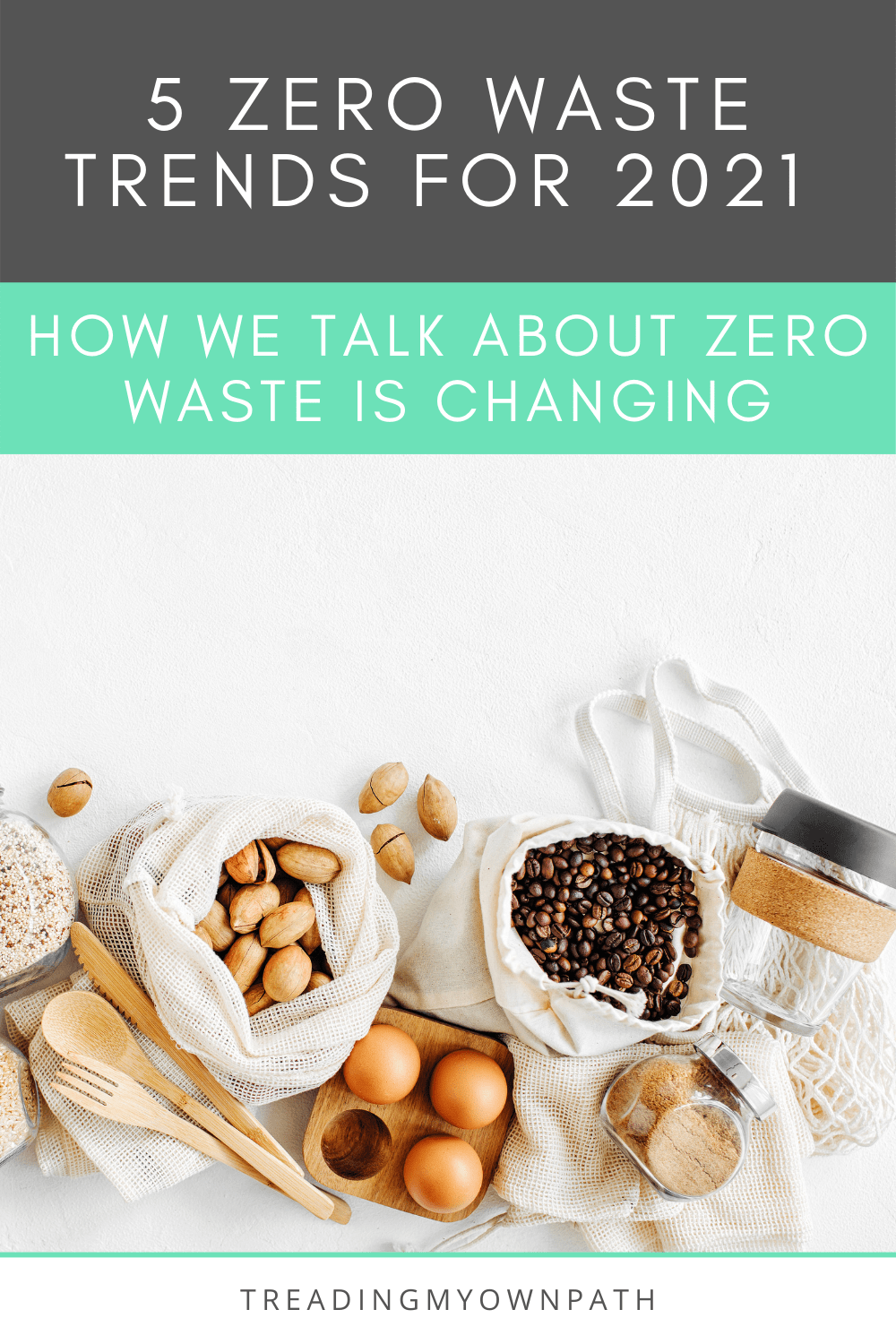 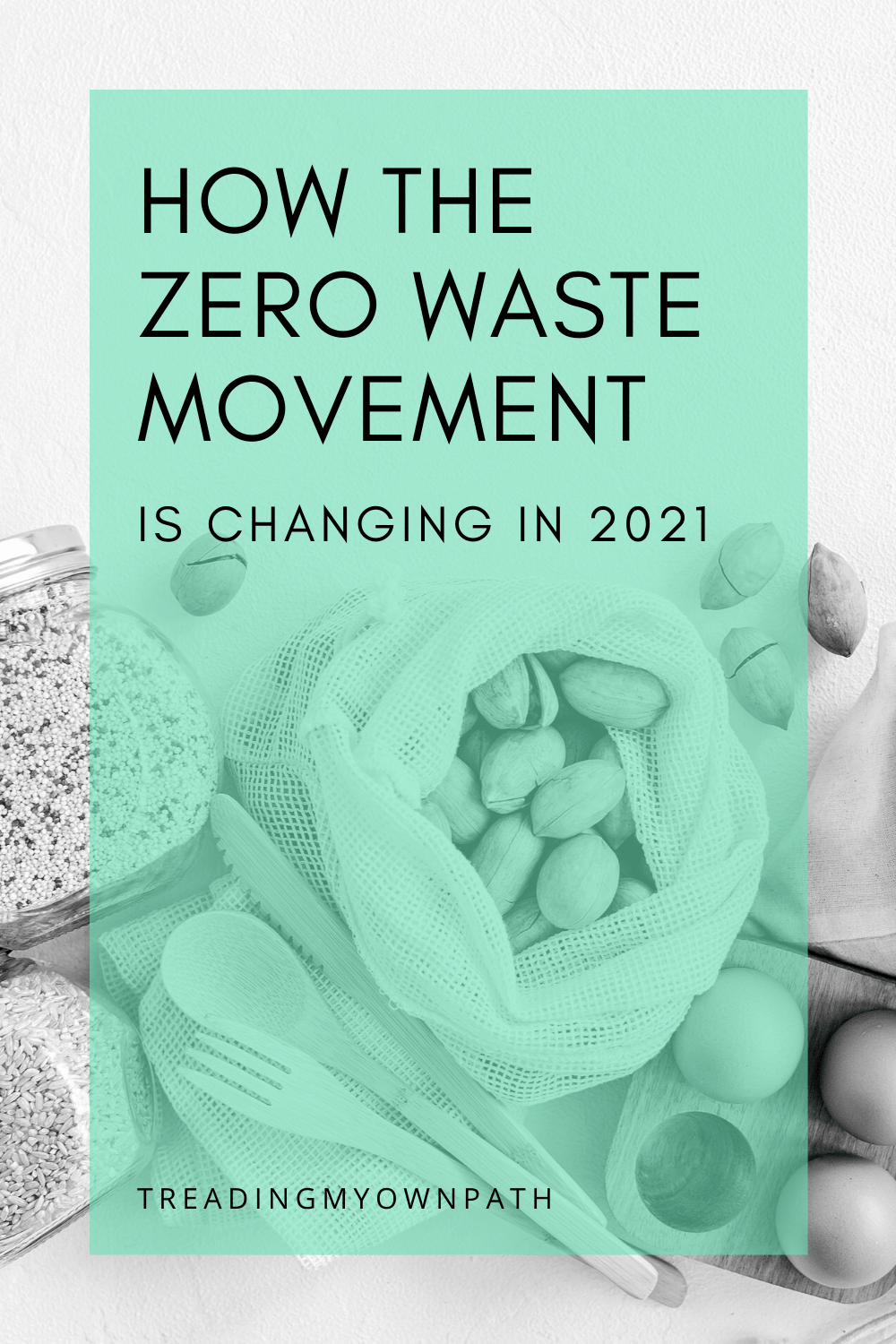 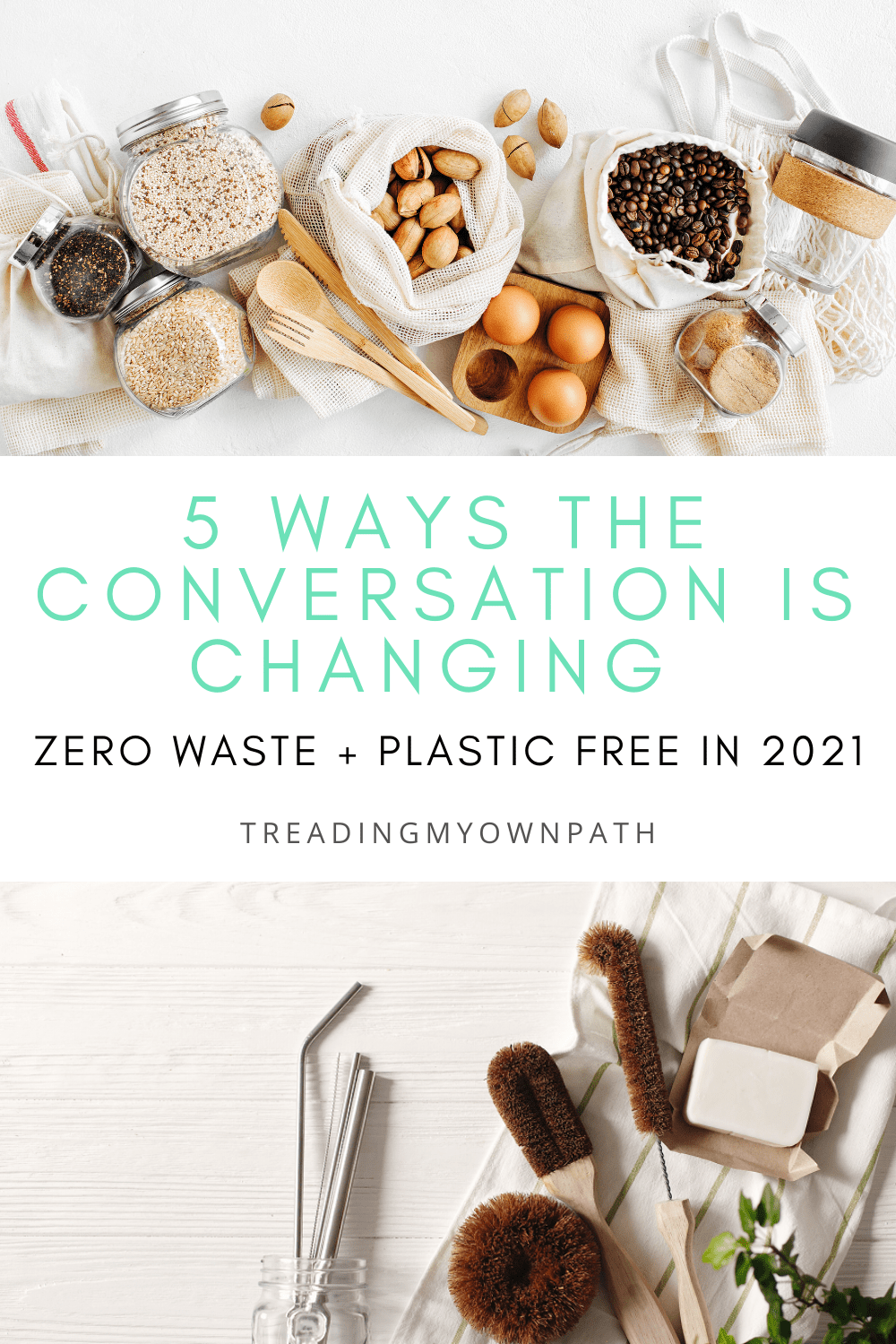