It’s no secret that I love food, and I love growing my own food even more. There’s nothing more satisfying than eating something freshly picked; there’s no unnecessary single-use plastic packaging when we grow our own; and we can’t get more local than our own back yards.

Even the darkest, smallest balcony can grow microherbs!

Now I’ve moved to a development with 7 dwellings and a community garden, I finally have the space and the opportunity to plant more. And believe me, I’m making the most of it!

We’ve lived here for just over a year, and I thought I’d share how our garden has evolved over the time. Although there are 7 dwellings, some are still empty and others have been rented to tenants with no interest in gardening. To date, my husband and I have had the garden pretty much to ourselves. Two sets of neighbours have their own garden bed spaces, but other than that, we have free reign.

Honestly, we love having the space to ourselves, but we’re looking forward to more garden enthusiasts moving in. There’s so much wasted opportunity as we don’t have the time to turn over the beds as quickly as we should, or succession plant as regularly as we could. There are plenty of other tasks that get neglected, too.

Whilst the garden produces a lot of food, it could be so much more productive with just a little extra work.

Take the tour of my organic veggie patch (and permaculture garden in the making), Perth Australia

We own and occupy the ground floor flat, and the communal garden backs straight onto our home. We have two sets of big sliding doors, so the garden is an extension of our living space.

This is what it looked like when we moved in: 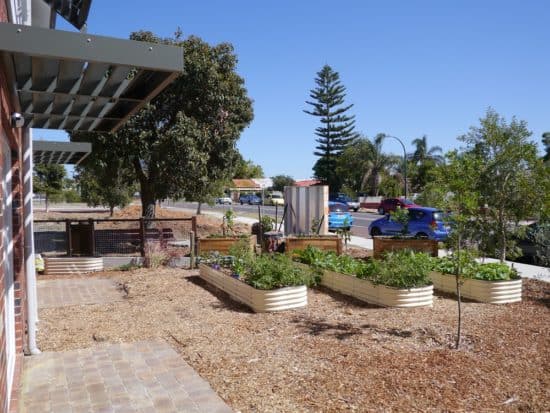 When we moved in the metal garden beds were in place, and reticulation had been installed, which definitively gave us a head start. ~April 2016

For 1 household, it’s a lot of space, but for 7 households it will be quite small. There’s also a huge amount of wasted space/growing potential, so we’ve been working hard to develop this and improve the soil and increase productivity.

We’ve also added a lot of pots, which is a great way to decide which things work best where before digging them into the ground. The two wine barrels contain the citrus trees we had on our balcony in our previous place. All the other pots are new additions. 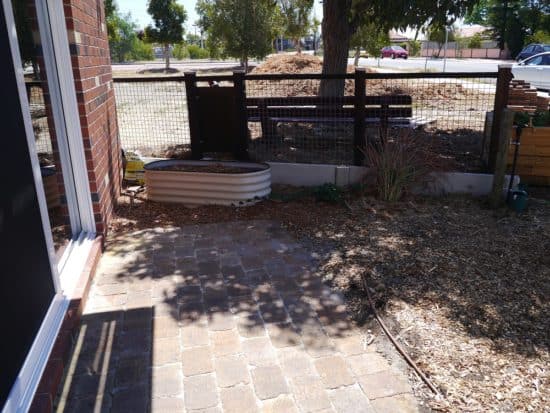 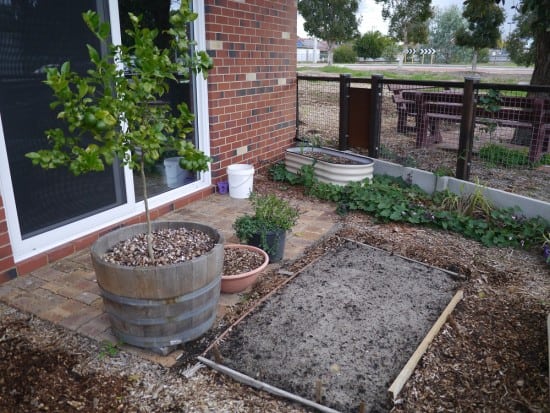 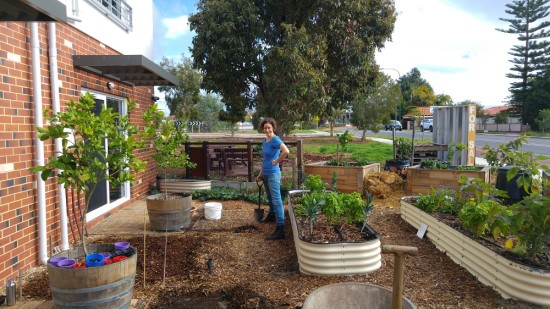 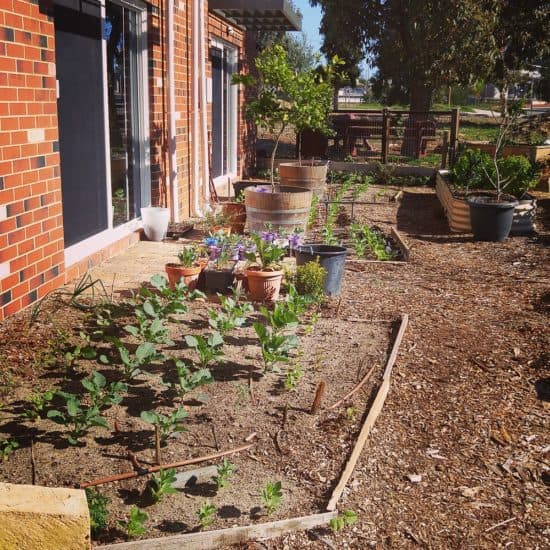 If you’re thinking that the soil looks really sandy, you’d be right. It is really sandy. The grey sands of the Perth Swan coastal plain (where I live) are considered to be the worst in the world. I don’t mean by disgruntled Perth gardeners, either. It’s a fact.

It means that we’ve dug in heaps of compost, veggie concentrate and clay into the sand to create soil. It might not look like it, but we have! The wood chip mulch breaks down over time to add carbon to the soil, too.

We bought a cubic metre of veggie concentrate from our soil yard and it was delivered via a tipping truck, so without packaging. It isn’t the cheapest option (we could have built up nitrogen using nitrogen-fixing plants or green manures, carbon using mulch and the soil web over time), but it meant we could plant veggies in the sand straightaway rather than waiting several months. It contains all the nutrients and minerals needed to grow veggies. 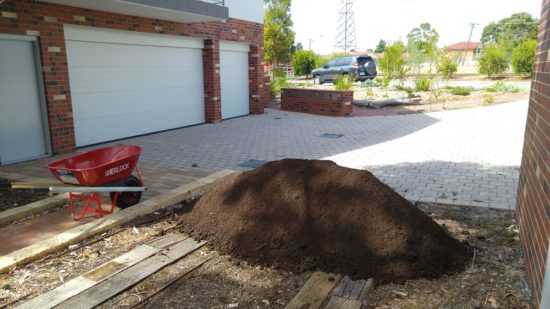 Creating Our Own Compost

We have four compost bins and create as much of our own compost as we can. We don’t turn it as often as we should so it isn’t breaking down as quickly as it could be.

If the whole complex got involved we’d have compost coming out of our ears! The reality is, many of the tenants live on a diet of junk food (fried chicken and other fast food is delivered almost daily – I kid you not) and they don’t even compost the paper food packaging – it goes in the landfill bin. Sigh.

To top up our compost my husband brings food scraps home from his work every week (in a big 20 litre bucket), and we collect coffee grounds from a local cafe every month or so.

It’s pretty amazing that we can add stinky food scraps and a few handfuls of dried leaves to a compost bin and be rewarded with beautiful soil-like compost! 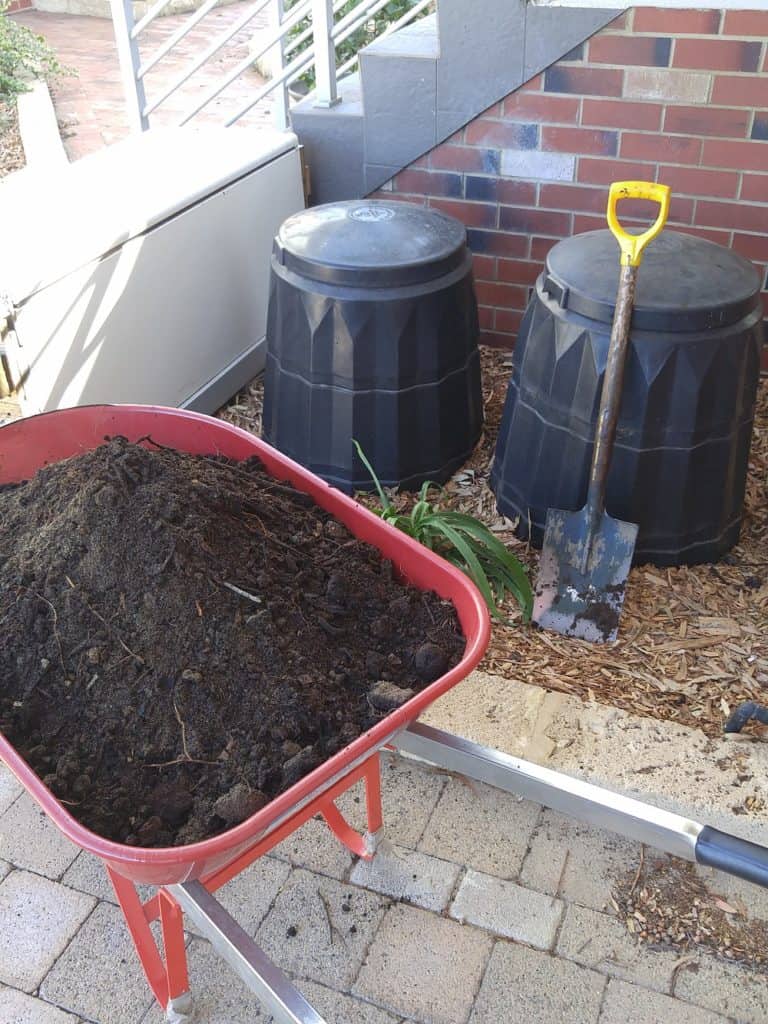 This is what your food scraps can be turned into. Beautiful compost! 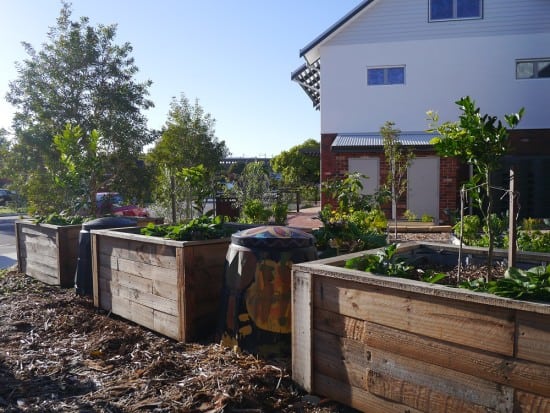 Planting in Pots (and Wicking Pots)

To maximise the use of the patio area without ripping out the paving, we’ve planted a lot of things in pots. Our garden is north-facing, and the patio is one of the best spots to grow (we’re in the southern hemisphere – its the opposite for those in the north). The space is sheltered by the house by the hot summer afternoon sun, and gets full winter sun because the sun is lower in the sky.

To ignore this is a missed opportunity!

Wicking beds are self-watering pots. Not something I needed to worry about in the UK, but in Perth it is a different story. We’ve used old olive export barrels to make wicking beds – they have a hole at the side rather than at the bottom, so a reservoir can hold water for the plants. 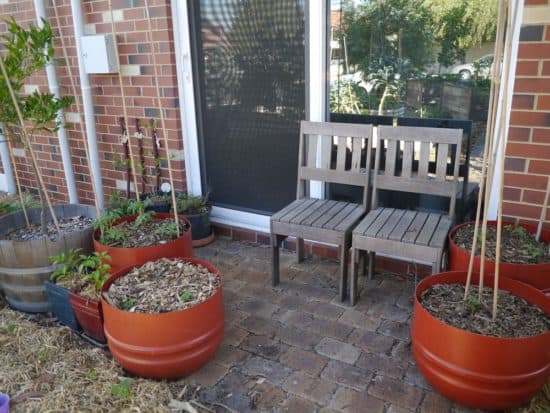 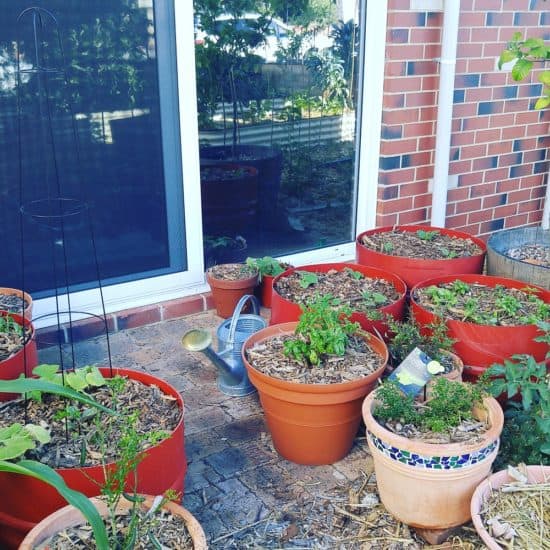 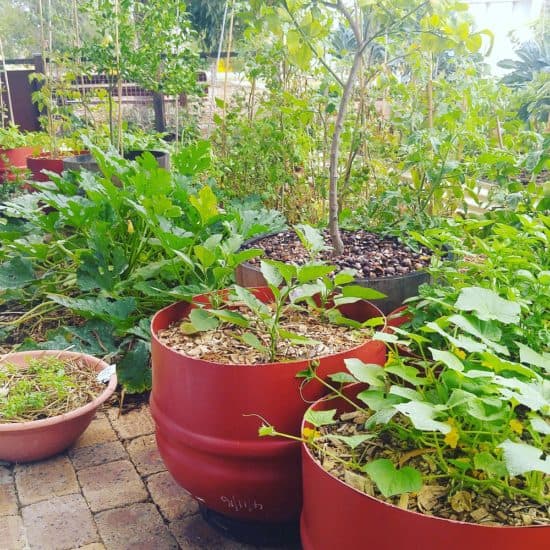 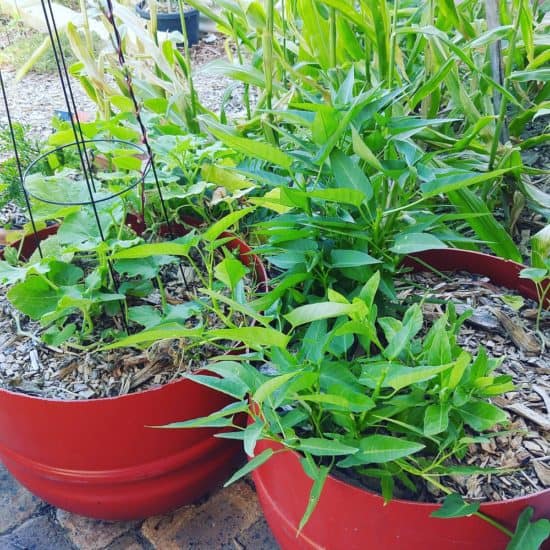 Greening the Garden: Progress in the First Year

I’ve taken a few images from the same spots over time, and I’ve included a few below so you can see how things have changed in the first year.

The View from the Office Window: 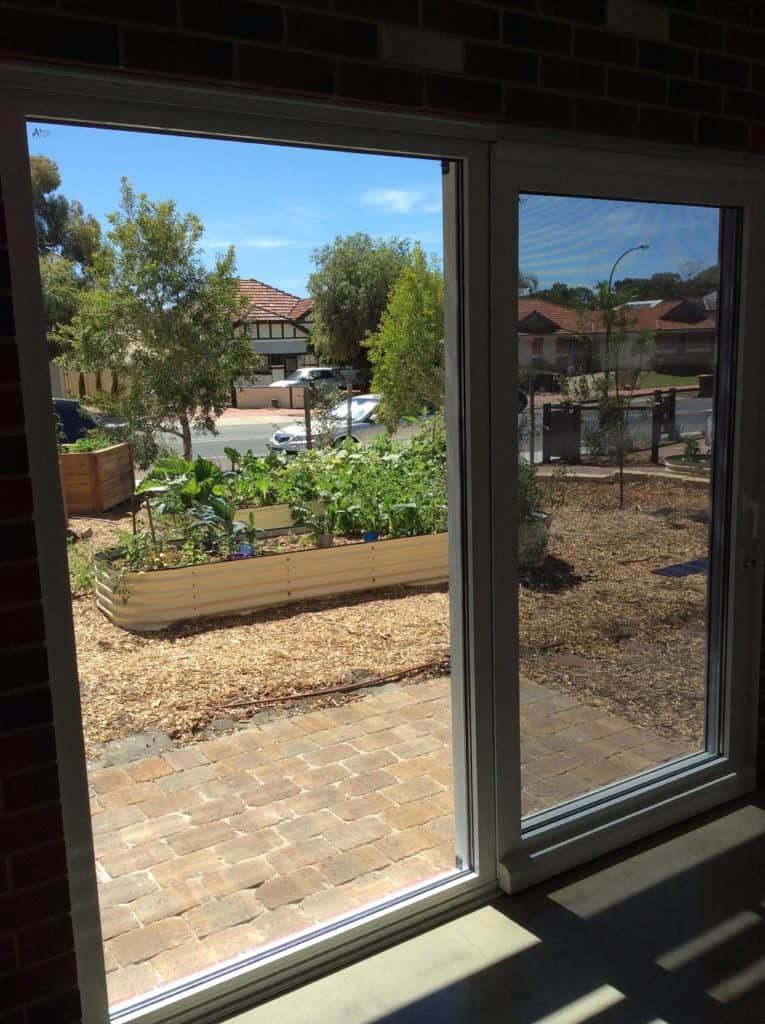 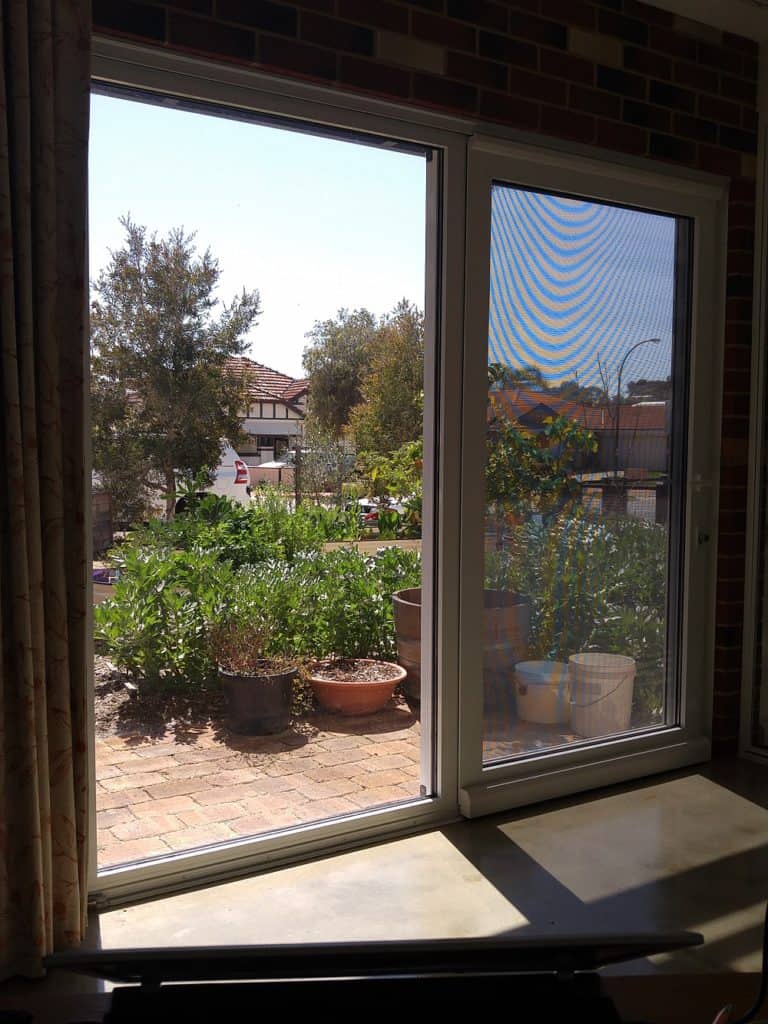 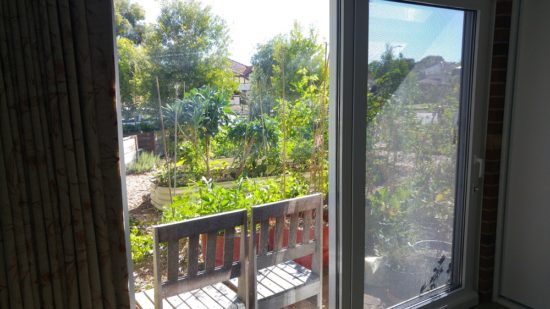 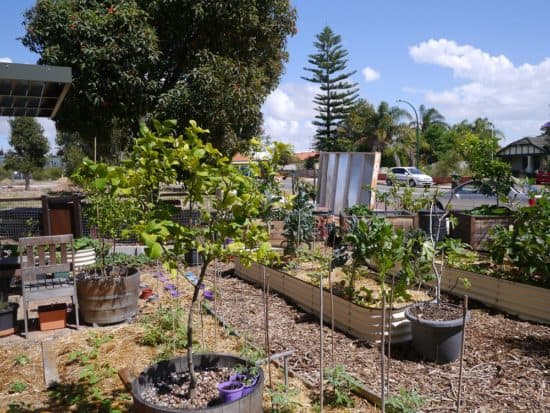 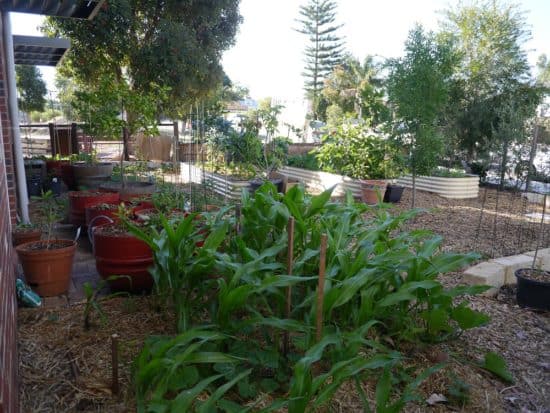 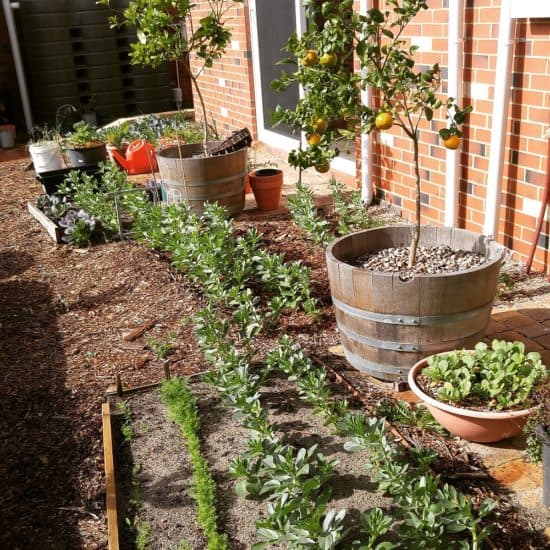 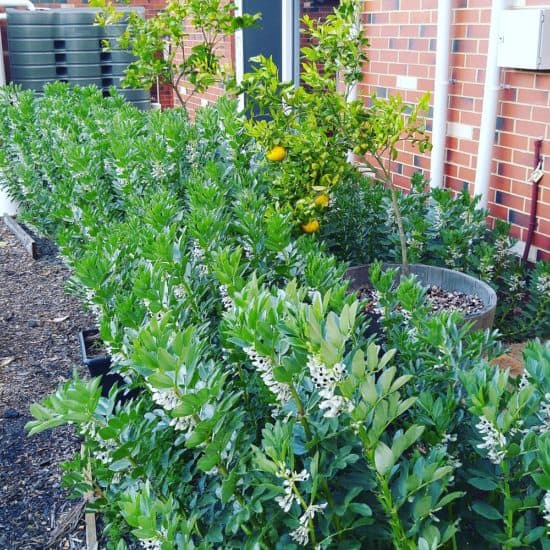 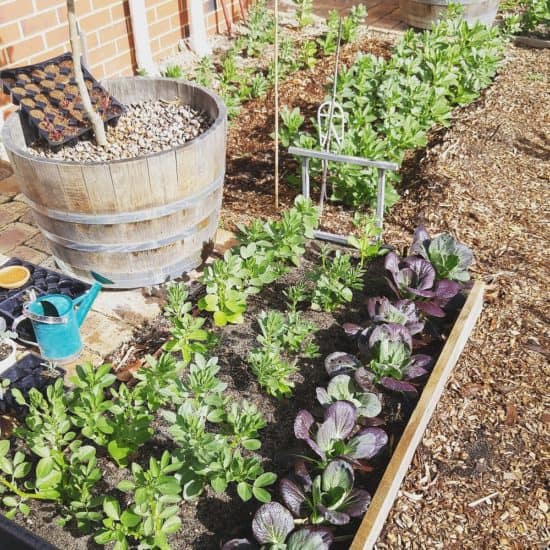 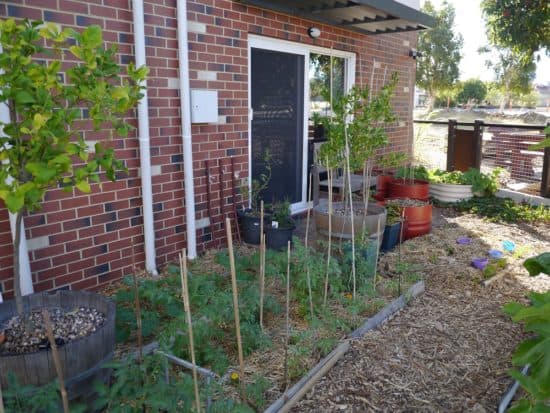 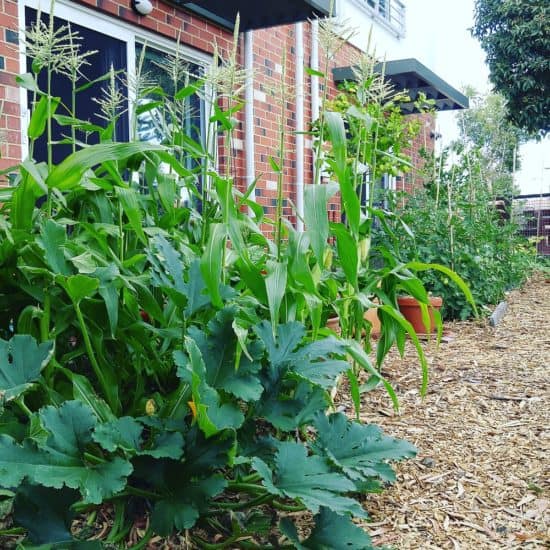 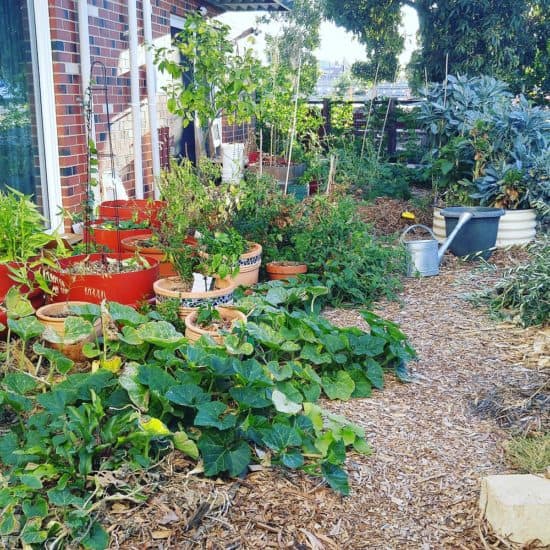 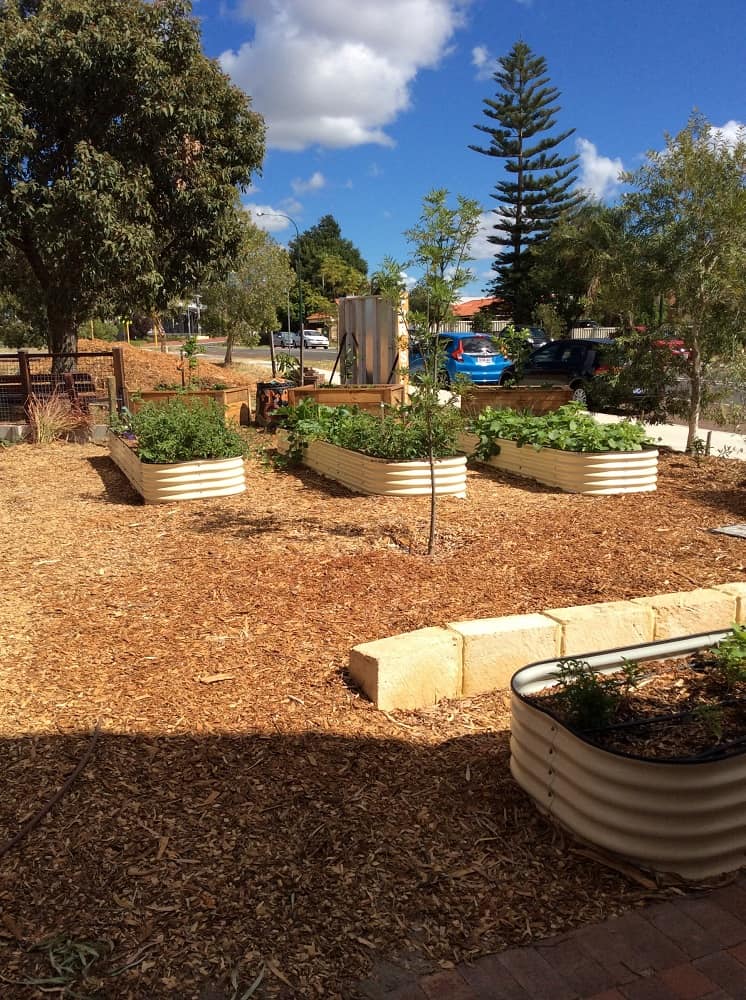 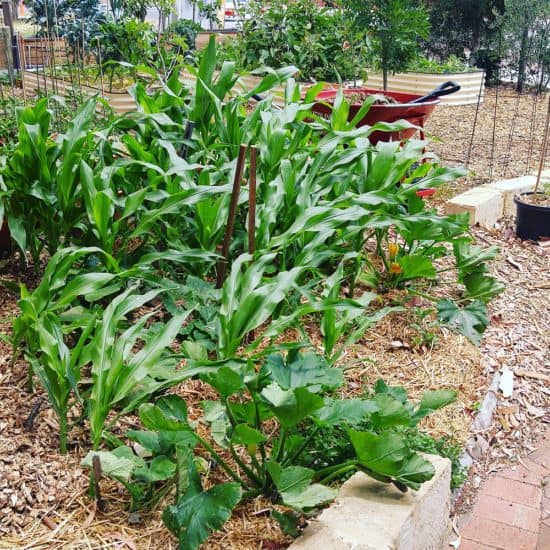 A Glimpse of the Harvest

We definitely aren’t growing all our own vegetables, but I do think we have the space. Unfortunately space isn’t the only constraint; the other is time! We did manage to produce a lot of our own vegetables over summer. Here’s a glimpse: 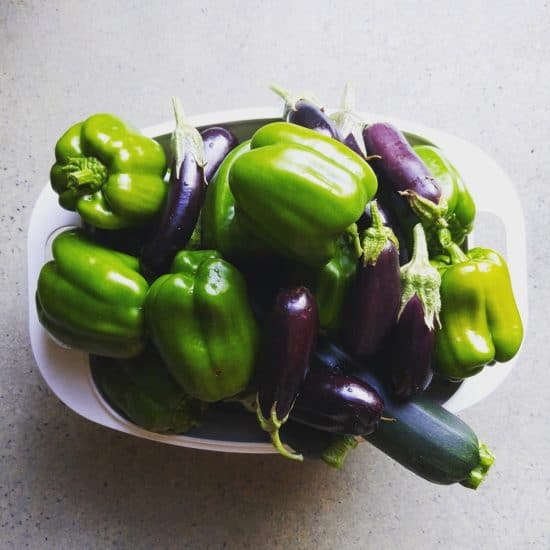 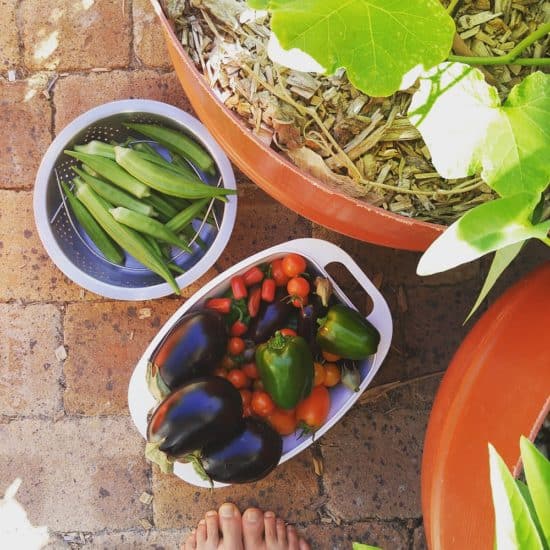 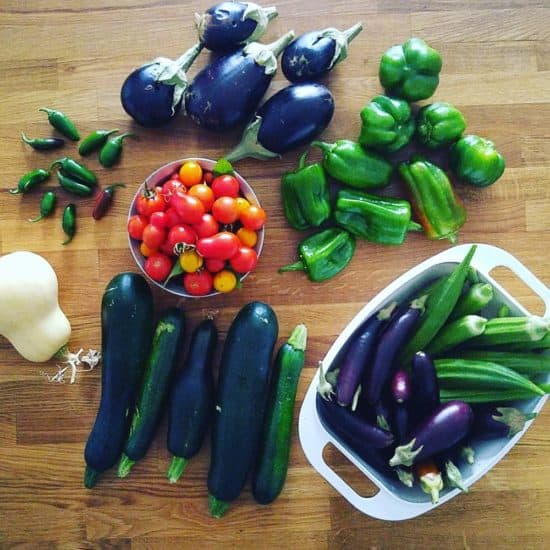 Perth has a warm enough climate to garden all year round, and in many ways summer presents more challenges than winter. We’re currently in the process of planting our winter veggies. By the start of next summer we’re expecting to have new neighbours, so it will be interesting to find out how the garden evolves. I’m looking forward to more hands!

Now I’d love to hear from you! Did you enjoy the garden tour? Did you have any questions? Is there anything you’d like me to write about in more detail? Do you have your own garden, and what tips do you have to share? Anything else you’d like to add? Please leave your thoughts in the comments below! 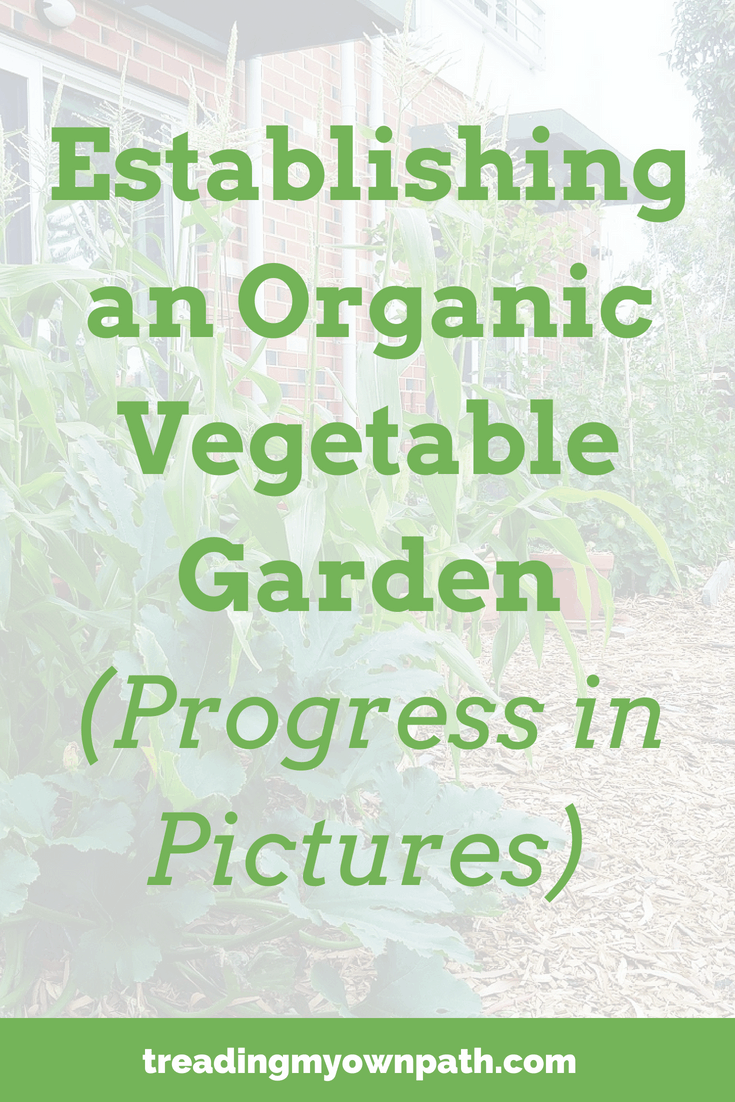 Isn’t Zero Waste Living Meant to be Cheaper? (+ What To Do When It Is...

The Zero Waste Lifestyle is the Second-Hand Lifestyle (A Guide to Buying and...
Scroll to top