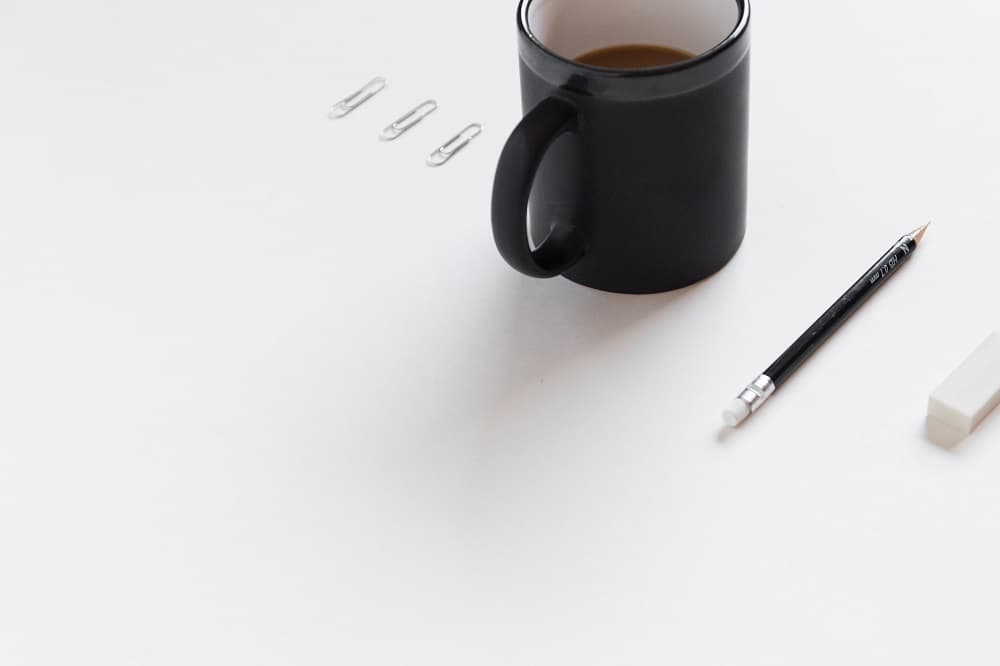 Yet I feel that I belong in both camps. I aspire to zero-waste living, and I’m equally drawn to minimalism. What’s more, I don’t really feel an internal struggle between the two. Which means they can’t be so contradictory at all…can they? 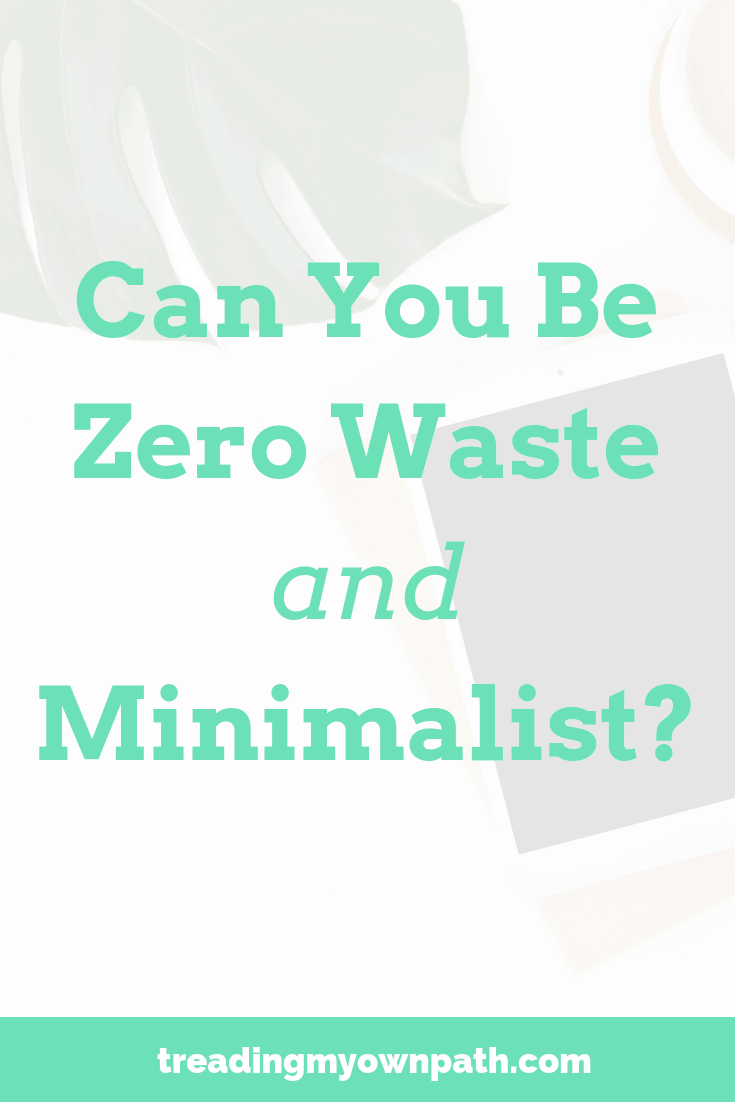 Minimalism, Zero Waste – and How It Began for Me

Was I a minimalist first, or a zero-waster? I’m not entirely sure. I think both ideas were there, even before I became either. At Christmas and birthdays, I’d always feel confused about being bought presents. After all, I didn’t really need anything, so I’d suggest that the gifter found me something useful.

It didn’t occur to me back then to say I didn’t want or need anything at all, but I knew that something wasn’t quite right. Anything I did have I knew could one day come in useful, so I kept cupboards full of glass jars, and shelves full of old tins, and a wardrobe full of clothes I might need if it suddenly got hot enough to wear summer clothes / I lost half a stone / I gained half a stone / hot pink suddenly started to suit me.

The minimalism really took hold when I moved to Australia. I didn’t have anywhere to store stuff whilst overseas, and I didn’t know how long I’d be staying, so there was no point shipping my worldly possessions across the oceans (not to mention, I didn’t have the funds for that). Everything I brought with me had to fit in 1 suitcase.

I remember thinking, when I move back home, I want everything I own to still fit in that one suitcase. It was my first real experience of how liberating it is to have few possessions.

Once we found our first place to live, the things we owned started to add up… but slowly. Our first flat was so small we couldn’t fit a lot of unnecessary furniture. It wasn’t that we consciously tried to be minimalists, but circumstances led us to be that way.

Then, a few months later, I found out about the Plastic Free July campaign. Quitting plastic for a month? Sure! Up until then, I’d been an avid recycler. I’d save my plastic bottles up and traipse across the city to the only depot for recycling. I’d wrap all my tiny bits of aluminium foil into a big ball before putting it in the black box to ensure the machines could pick it up. I composted my scraps. I thought that was enough.

Quitting plastic was only meant to be a month-long challenge, but once we’d seen the devastation that plastic causes in the environment, and understood the health implication from exposing ourselves to plastic, how could we ever go back?

I gave up plastic, and switched to buying things in cardboard and glass. Both of these are noticeably heavier (especially when you don’t have a car to carry your shopping home) and I became aware for the first time of how much packaging I was consuming. Packaging that served the sole purpose of moving something from A to B, and then, with no further purpose, was thrown away.

During that month of Plastic Free July, I also found out that glass isn’t recycled in my state. Yes, it’s accepted in the recycling bins, but it’s either trucked to another state or sent to landfill.

Zero Waste and Minimalism are both about Simplicity

Zero Waste means sending nothing to landfill. Truly zero waste means sending nothing for recycling either. For most zero-wasters it’s an ideal we aspire to; a journey with a destination we may never quite reach but one we are always working towards. For me, the biggest realisation with zero waste is if I don’t want to send anything to landfill or recycling, I have to control what comes in through my front door.

Zero waste means simplifying. I buy in bulk using my own containers. It means I’m limited to where I can shop, so I don’t get dazzled by special offers or buy more than I need. I no longer have multiple bottles of toiletries cluttering my bathroom because I felt compelled to stock up whilst they were on 3 for 2.

If I can’t find what I want without the unnecessary packaging, I look for an alternative, consider making my own, or go without. Occasionally none of these are options, and I’ll make the purchase anyway – I am human after all, and that is why zero waste is an ideal! It’s not about deprivation, but making conscious choices.

Zero waste means I avoid shopping malls where beautiful models try to sell me clothes that I don’t need, or gadgets, or toys. I don’t go to the shops to browse, only when I need something specific. I think about the life cycle of a product before I buy it: what’s it made from, will it last, and how can I dispose of it at the end of its life?

Hang on…or is that minimalism?

Minimalism is about asking ourselves, what is enough? Keeping things that are useful or practical, and getting rid of the clutter. Getting rid of all those “just in case” items that fill our closets and spare rooms and storage space. Choosing the important things and ditching the rest.

What is ‘enough’ varies from person to person, so there are no hard and fast rules for minimalists either. Again, it is an ideal. It’s also a journey and one that requires constant work, because there is always more stuff. As with zero waste, one of the most important ways to keep clutter out of your home is to control what enters through the front door.

Minimalism is actually a huge complement to zero waste living, because it addresses the elephant in the room – or rather that huge big pile of stuff in the room that we’re keeping in case it might ever be useful. Well, that’s how us zero-wasters justify it to ourselves. Don’t want to send it to landfill, it might come in handy!

Look more closely though, and that pile of stuff is probably harbouring a whole heap of negativity. Things we bought that we didn’t need, or want, or use. Waste. Guilt. Things we received as gifts that we didn’t like. More waste. More guilt. Clothes that no longer fit. Further waste. Further guilt. As zero-wasters, we feel guilt even more, because we care about the embedded energy in these things.

The irony is, that as these things sit collecting dust and generally not becoming handy, they may as well be sitting in landfill.

Minimalism is confronting. It makes us question these choices. It makes us look long and hard at our shopping habits and spending patterns. Most importantly, it makes us buy less of what we don’t need – meaning less waste.

Can you be Zero Waste and a Minimalist? Yes!

Zero Waste isn’t about hoarding. Minimalism isn’t about sending constant streams of stuff to landfill. There’s only one key area where zero-wasters and minimalist thinking differs – convenience. Zero wasters are all about reducing what they send to landfill (and/or recycling). Minimalists are all about reducing clutter. Zero wasters are more likely to carry reusables;  minimalists are more likely to use disposables. It all comes down a personal decision as to what is “enough”, and different people have different values. There are zero-wasters who will never embrace minimalism, and minimalists who will never live a zero-waste lifestyle.

Then there are those of us who want to do both.

And yes, it is possible. Both ideals have so much in common. They are both a reaction to waste, to rampant consumerism, to buying more than you need. They are both about mindful living and making conscious choices; deciding what’s important and doing more of that, and less of the stuff that isn’t. Buying fewer things and choosing well. Making do or doing without. Simplifying.

Now I want to hear from you! Which side are you on…are you a minimalist, or a zero waster, or both? (Or are you neither?!) Which came first? Have you found one path has helped you on the other, or hindered your progress? What are your biggest challenges, and what have been your biggest realisations and triumphs? Please tell me your thoughts in the comments below!

Not Quite Homesteading: My Balcony “Farm” Project

Can this Empty Tin of Tuna Save the World?
Scroll to top