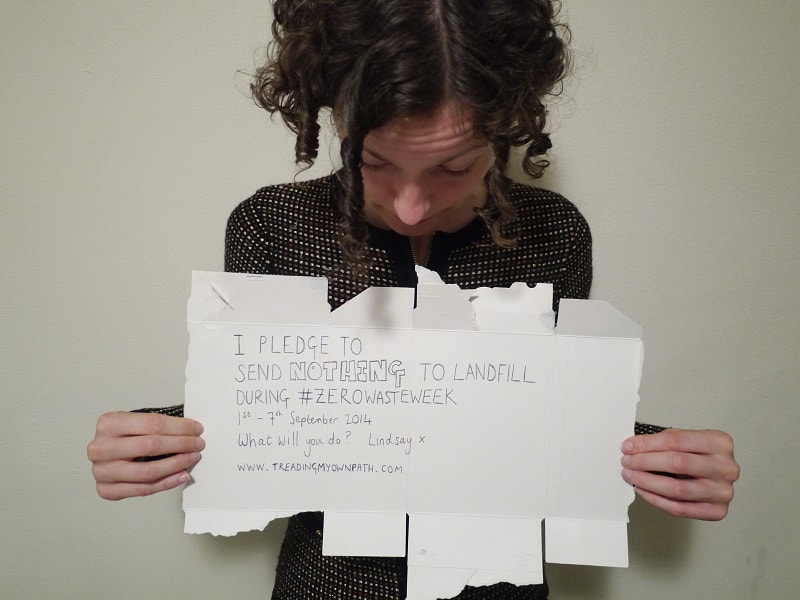 When I first agreed to participate in Zero Waste Week, I had totally forgotten that I would be on holiday. Being completely waste-free isn’t easy at the best of times, but what about whilst on holidays, with all that uncertainty and all those unknowns?! At home with your routines and habits, and you’re comfortable with where to buy the things you need, it’s far easier to plan and make preparations.

When I did realise, I decided it would be good to give it a go regardless. Your morals and philosophies shouldn’t change just because you’re not at home! I love a challenge, and anyway, I wasn’t planning on throwing my zero-waste philosophy out the window just because I was on unfamiliar ground…so why not just keep on doing what I always (try to) do?

My Pledge: To Send Nothing to Landfill during Zero Waste Week

The theme for Zero Waste Week 2014 is “one more thing”, so I wanted to pledge something that would be a challenge – not something I do already – and sending nothing to landfill is my long-term goal. Holidays or not, that’s what I want to be doing!

For the first few days I was in London visiting my sister, who was responsible for the shopping. She actually lives right next to a bulk bin store and a superb little greengrocer that sells most of its produce loose – even the majority of herbs, and things that are often plastic-wrapped like baby carrots. I often hear that bulk bin stores don’t exist in the UK, so I like seeing things that prove this wrong! I was also very pleased to learn that she buys her olive oil in bulk using a refillable bottle : ) 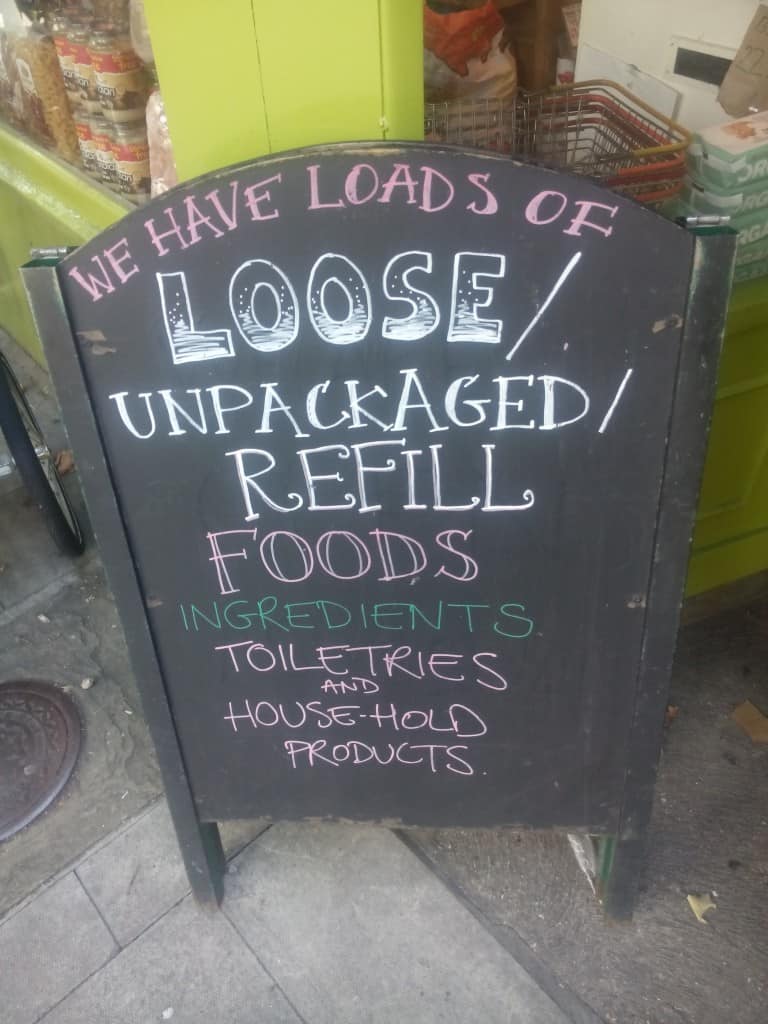 Yay! Loose, unpackaged and bulk foods for sale in London right around the corner from where my sister lives (Newington Green). 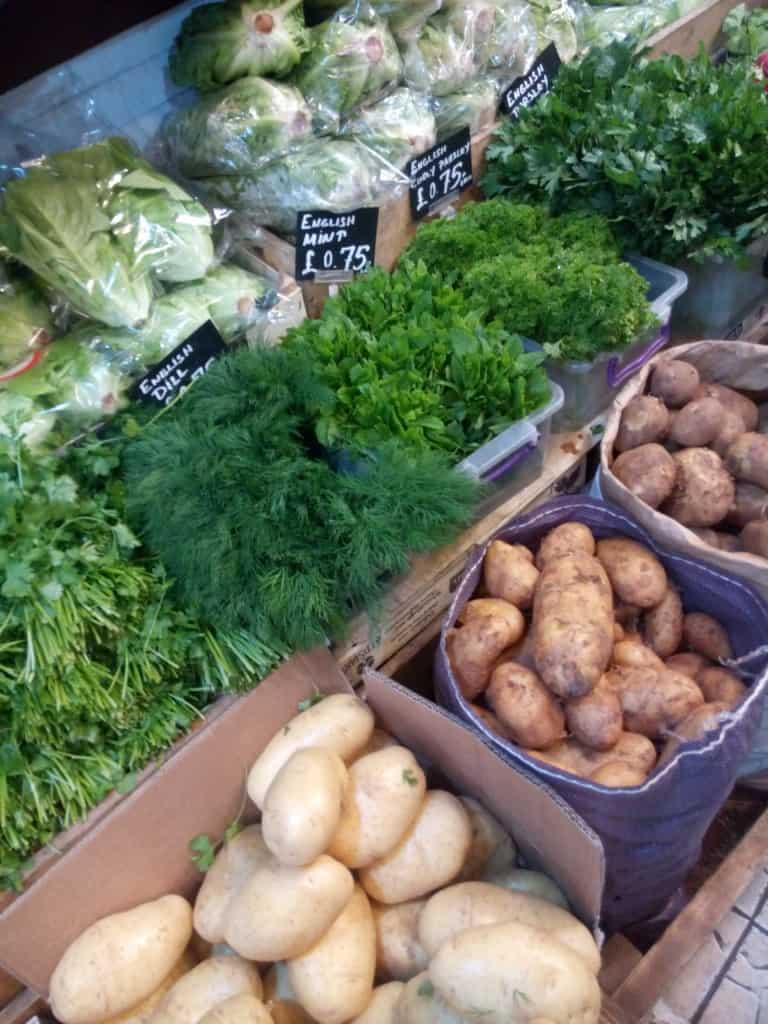 This superb little greengrocer had so much stuff completely packaging-free, including herbs, chantaney carrots, chillies and all sorts of other exciting and exotic things! 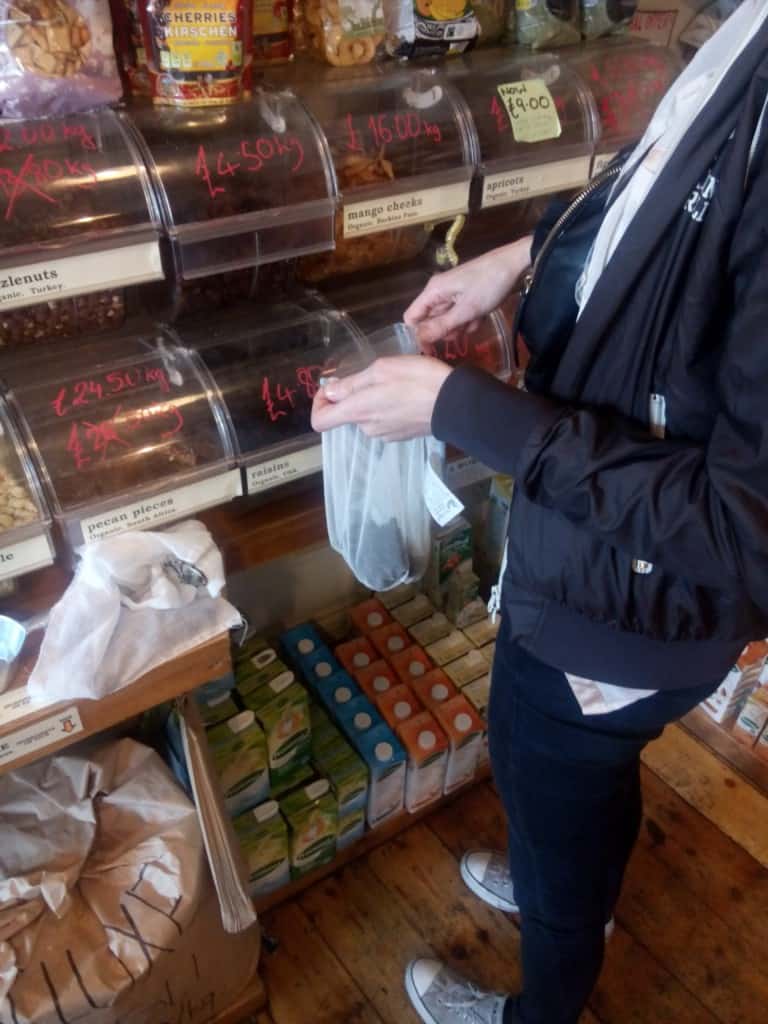 Bulk bin store and my sister’s first experience of using reusable produce bags. “But prunes are sticky!” then “Oh, you can just wash the bags after.” Yep, it’s that simple!

We also ate out quite a bit (I’m on holidays!). That said, I’m always vigilant to refuse any unneccessary packaging, particularly plastic cups and straws, and bags of any kind. I’ve been carrying my metal lunchbox around with me in case I have any leftovers that need to be taken home. Alas, I’m far too greedy for that and my plate is always spotless! 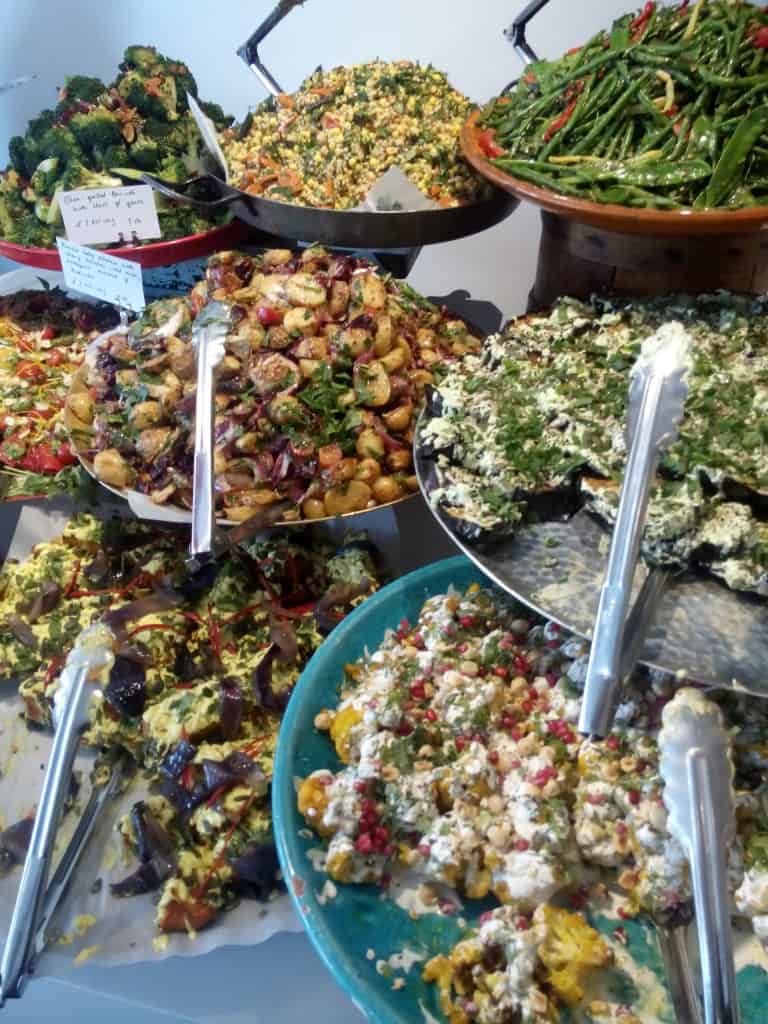 This is the salad selection at Ottolenghi in Islington, London. The salads are offered as take away or for dining in. They are amazing. I went twice in three days (eating in of course!). Mmmm. 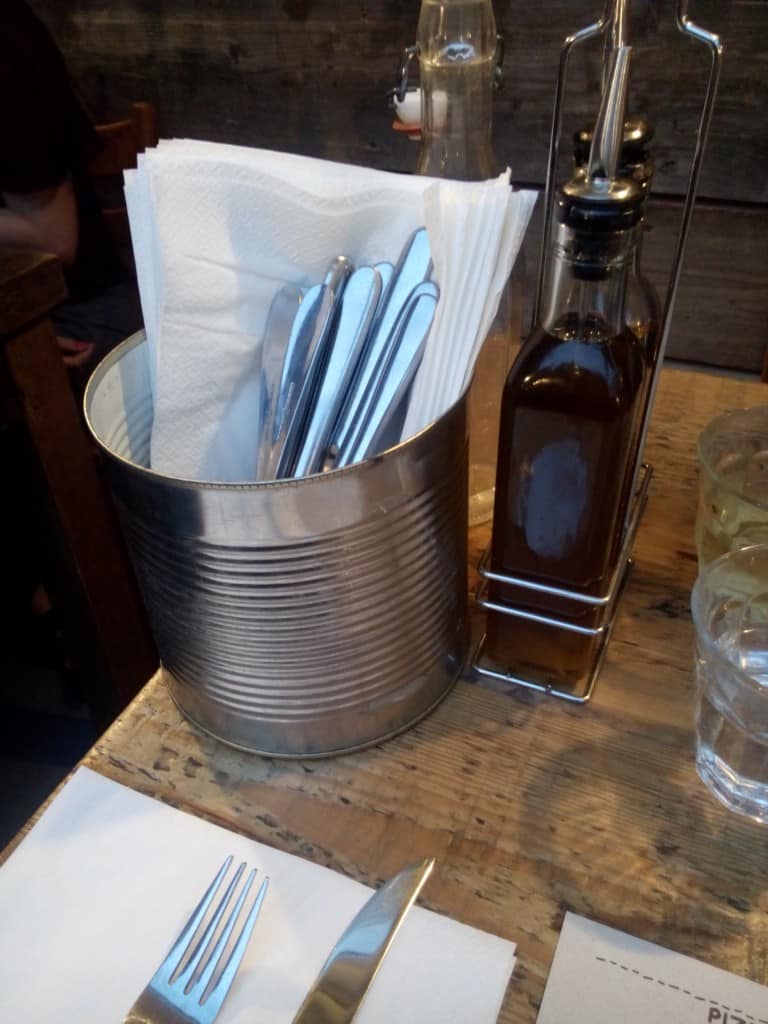 This was an awesome little pizza place where they use sourdough for the bases. I loved the upcycled tins being used as cutlery/napkin holders, and also the refillable oil and water bottles.

After a couple of nights I’m back staying with my parents in Kent. They have a garden full of home-grown produce and both home- and council-collected composting, so landfill waste is not a problem from food. I trained my mum to take her own containers to the butchers during Plastic Free July 2013. She doesn’t have any bulk bins stores locally, but she does her bit. (She’s even joining in the zero waste action by keeping a list of all the things she’s sending to landfill!) 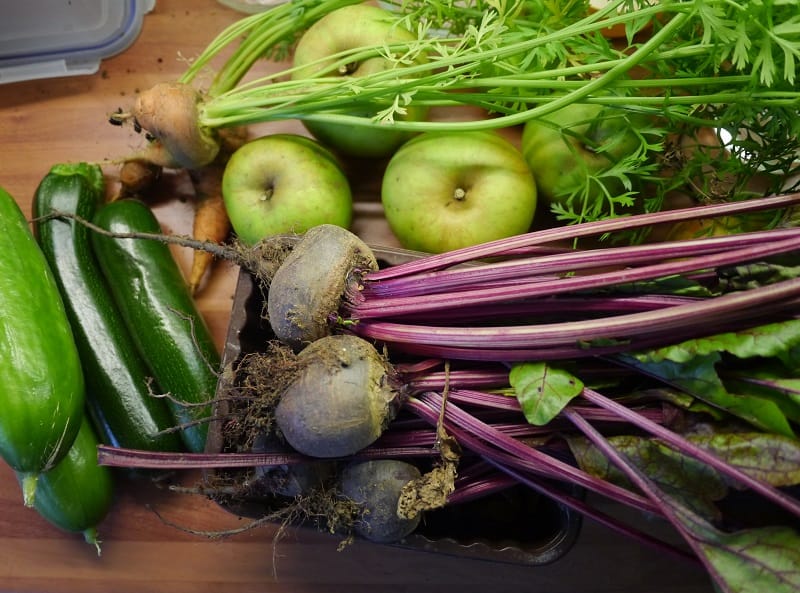 Being able to grow your own and then compost the food scraps is an awesome way to cut down on packaging and landfill waste. 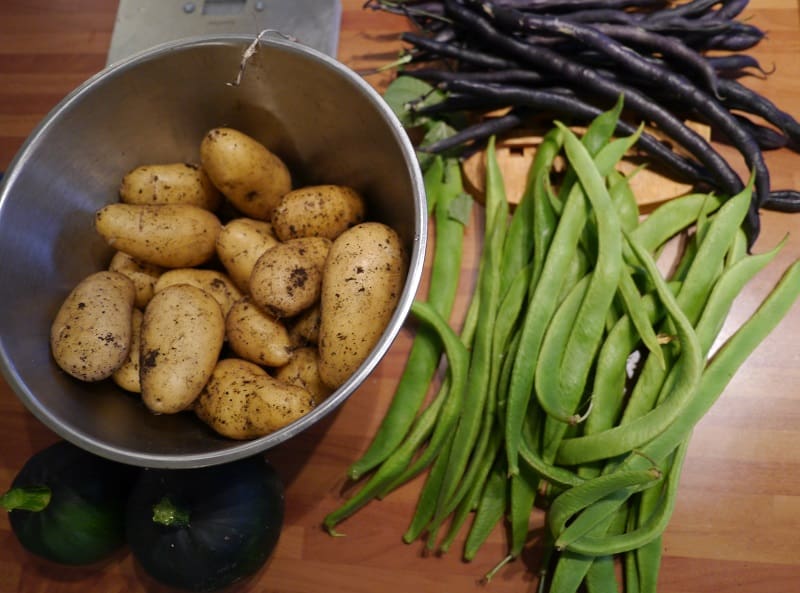 Zero waste vegetables for dinner – no packaging in sight : )

I also composted a tissue after blowing my nose, so as not to put it in the bin. Not particularly interesting but worth a mention because my mum was absolutely horrified/disturbed at the idea! I even had to fight to be allowed to put it in the composting bucket! She was quite grossed out by the thought of having to wash it out after when my tissue had been in there. Never mind that it has rotting vegetables, coffee grinds, moldy tomatoes and other stinky stuff in there – it was my tissue that she found the most disgusting!

Zero Waste Week: What About the Waste?

I was feeling very pleased about how little waste I’ve generated until my sister pointed out that I used some dental floss and a cotton bud at her house, and both went in the bin. I don’t floss because I’m lazy and I can’t find plastic-free floss, but my sister has had a root canal and is keen not to have another one. Staying with her and observing her superior dental routine, I felt guilty about my lack of flossing, so joined in…I didn’t even think about the waste! As for the cotton bud, I just assumed she used ones with biodegradable stems, but the one she has are made with plastic. Oops. She also doesn’t have any composting facilities either, so even a biodegradable one would have ended up in landfill.

My sister also cooked me dinner on the first night, and the vegetable peelings ended up in the bin, but I didn’t buy the ingredients or make the food (and everything was bought before I arrived), so I don’t think it counts.

At my parents’ house, there is a snack cupboard full of plastic-packaged things that I try to avoid, but I confess to eating a few handfuls of peanuts from the open (plastic) bag in the cupboard. And a biscuit from a packet. (And most of a bar of chocolate, but that comes in foil and paper which can be recycled!) Tomorrow I will be better behaved!

Zero Waste Week has been quite fun so far, and I’ve enjoyed seeing how my family have picked up some of my ideas and my influence is rubbing off. In a place like London it can be quite overwhelming when you see how much rubbish is produced (everywhere, by everyone, all the time), so it’s reassuring to think that it is still possible to take action. After all, small actions taken by lots of people lots of times adds up to making a big difference, and that is what leads to real change.

How about you? Are you taking part in Zero Waste Week? If so, how has your experience been so far? What about vacations: do you try to keep your standards the same when on holiday, or do they take a holiday too? I’d love to hear your thoughts so please leave a comment!

Why Tetra Paks aren’t green (even though they’re ‘recycla...
Scroll to top