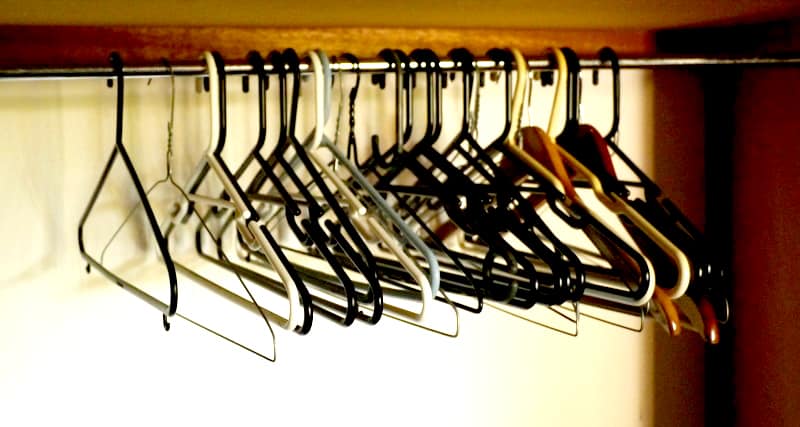 Inspired by the Tiny House movie I saw last weekend (I wrote a review of Tiny: A Story of Living Small in Tuesday’s blog post), I decided it was time again to tackle our stuff, and to declutter some more. We may not live in a Tiny House, but I still believe in minimalising our possessions. There’s no need to keep things in our home that aren’t useful, that no longer serve us and that create mess, take up time (to clean, to find, to sort) and bring up negative emotions (guilt for buying, guilt for keeping, stress for maintaining, frustration, and so it goes on).

As I’ve said many times before, I’m a natural hoarder, and letting go is something that I’m having to learn. A lot of this hoarding is attached to my dislike of waste – any waste. I’m someone who keeps used matches in case I can re-use them! But I also think that I use my dislike of waste as an excuse – even subconsciously. After all, it’s easier to say “I just hate waste”, than admit to myself that there’s more to it than that.

Thing is, there is a lot more to it than that. It’s not just about “stuff”. If it was, we’d decide we didn’t need it, and get rid of it. Simple as that. But that isn’t what happens. Particularly if you’re a hoarder, but it’s true for most people; our emotions play a much bigger part in the decluttering process than we realise.

Say you buy a pair of trousers, and you know that they’re a bit tight, but you think to yourself – I’ll slim into them. Maybe you will. More likely though, is that they will hang in the wardrobe, not being worn, but a constant reminder of how you failed to slim down, how you failed at the task you set yourself; how you made a bad decision and how you wasted money buying something that you may never wear. Maybe you bought them, knowing you wouldn’t fit into them, because you wanted to hold onto the past. You don’t want to accept that you’re getting older, and you can’t wear the things you used to.

Or the fancy kitchen gadget that you bought after seeing all the adverts – the ones where cooking looked so easy and hosting friends for dinner was made to look effortless? The gadget that you were convinced you’d use every day, that would turn you into a wonderful cook, yet it sits there, untouched. Because the reality was very different. You still don’t actually like cooking, the gadget is a pain to wash up, and actually, you’d rather go out for a meal with friends than invite them to your house. You still love the idea of being a great host, even though you know this probably won’t happen. The gadget remains because you feel foolish for being duped by the adverts, you feel guilty at having spent so much money on something you use so little. You want to see the gadget  as a symbol of that hope. Really though, it is a symbol of what you are not; an unwelcome reminder of a dream that didn’t come true.

Whatever it is, we all have moments like this. Most of us have things in our houses that we know, deep down, we should get rid of. Why can’t we? All of the items we have sitting in our homes that we don’t-use-yet-can’t-get-rid-of have some kind of emotion attached to them. These aren’t necessarily emotions relating to how we feel about an object, but how we feel about ourselves.That’s what makes it so hard to get rid of them.

We don’t want to admit that we made a bad purchasing decision, that we failed at a hobby, or that we weren’t the person we wanted to be. In this way, these objects represent us, and by keeping them, we still feel that there’s a chance that we might change…that it will become a useful purchase, that we will take up that hobby or that we will start to appreciate Grandma’s eclectic taste. But this pressure doesn’t make us feel good. It’s not accepting what is. We don’t live in the future, and we don’t live in the past. We live in the now, and we need to accept things as they are. To focus too much on the future or the past is draining. The guilt, the sense of failure, the embarrassment.

Wouldn’t it be great to be able to remove all that bad energy and all those negative emotions? Well, we can. Simply by giving things away.

That doesn’t mean that it’s easy. Don’t underestimate the power your possessions hold over you. But don’t give your power away, either. Take things slowly. Notice any resistance you feel, but don’t let it take control. Tackle one item at a time. Find the things that no longer serve you, and slowly let them go.

Do emotions play a big part in decluttering for you? Do you hold onto things you know you should get rid of, or do you find it easy to let things go? What emotions do you feel when trying to clear out your unwanted possessions? I’d love to hear from you – please tell me what you think in the comments!

A Movie Review – Tiny: A Story About Living Small

Would You Wash Your Hair with Bicarb and Vinegar?
Scroll to top