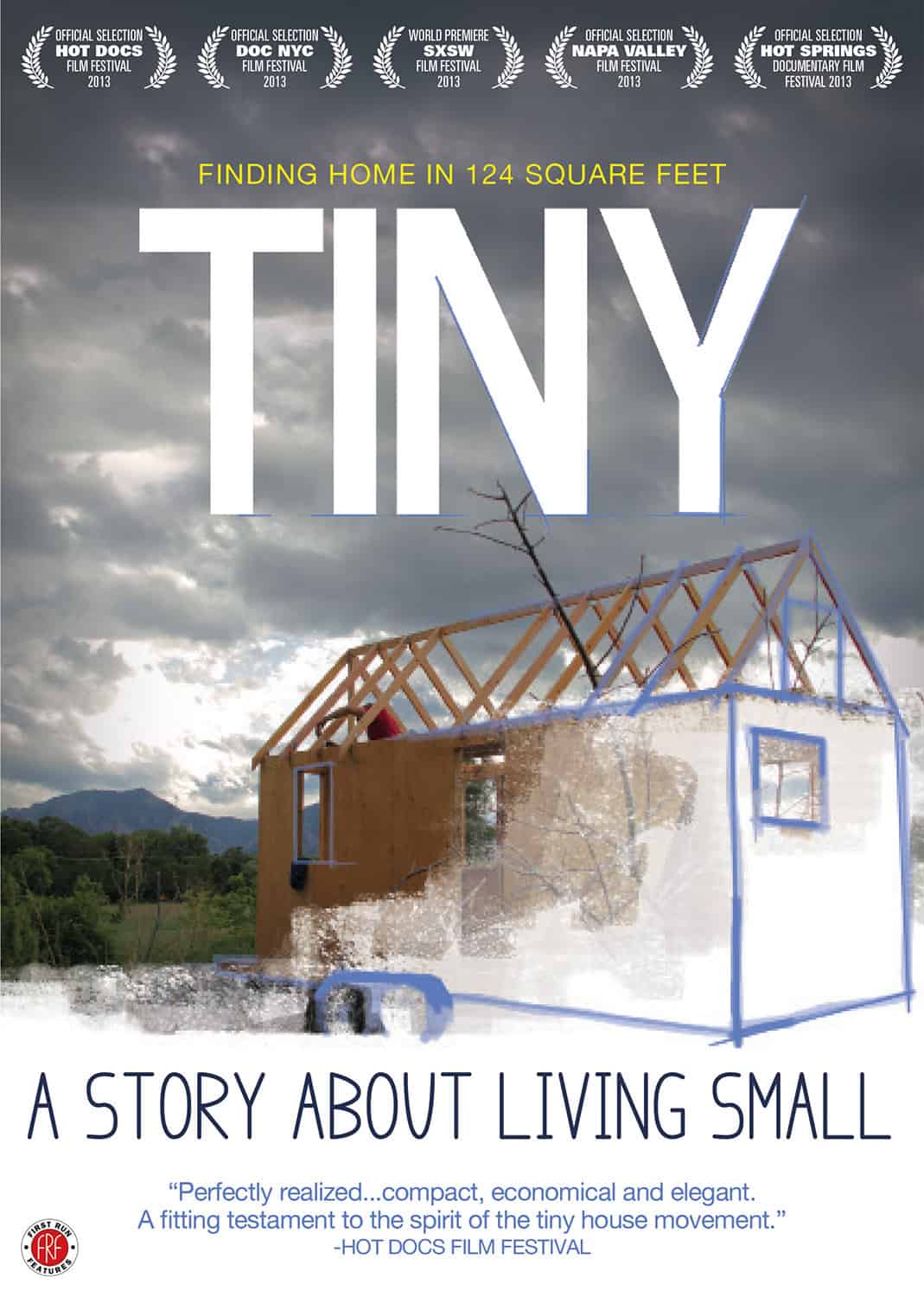 I’ve been to the cinema again, and this time I want to tell you about a movie that’s not about waste, but about simply living and small spaces. Tiny: A Story About Living Small follows the story of Christopher Smith, a 30 year-old American who has a dream to build a tiny house and live in the wilderness. With limited funds and absolutely no building experience, but overflowing with passion and enthusiasm for achieving his dream, Christopher attempts to build his own tiny house on a trailer.

You can watch the movie trailer here:

Here’s the official synopsis from the Tiny Movie website, which also gives a quick explanation of what the Tiny house movement is all about, if you don’t already know:

“After a decade of travel, Christopher Smith approaches his 30th birthday and decides it’s time to plant some roots. He impulsively buys a 5-acre plot of land in hopes of fulfilling a lifelong dream of building a home in the mountains of Colorado. With the support of his girlfriend, Merete, he sets out to build a Tiny House from scratch despite having no construction experience.

From 1970 to 2010, the average size of a new house in America has almost doubled. Yet in recent years, many are redefining their American Dream to focus on flexibility, financial freedom, and quality of life over quantity of space. These self-proclaimed “Tiny Housers” live in homes smaller than the average parking space, often built on wheels to bypass building codes and zoning laws. TINY takes us inside six of these homes stripped to their essentials, exploring the owners’ stories and the design innovations that make them work.

When Christopher decides to build his own Tiny House, he dives into the tension between settling down and staying adrift, between preserving a parcel of land that he loves and developing it. Merete begins to ask her own questions about settling down, and both walk away with unexpected lessons about the meaning of home, the importance of place, and the personal impact of sticking with a project that became bigger than they’d ever imagined.

TINY is a coming-of-age story for a generation that is more connected, yet less tied-down than ever, and for a society redefining its priorities in the face of a changing financial and environmental climate. More than anything, TINY invites its viewers to dream big and imagine living small.”

I’ve read a bit about Tiny Houses, and I was keen to learn more. I found the movie, a mix of Christopher’s journey and interviews with other Tiny House dwellers, an interesting insight into the reasons people choose to live in such small spaces. I also found the movie quite motivational, and I left feeling quite inspired. I don’t know if I could ever live in a Tiny House, but it certainly reminded me that my ongoing journey to minimalise my possessions was waiting for me to revisit it!

Some of the people I went to the screening with felt the movie was lacking in depth. By focussing on two aspects – Christopher’s story of building a Tiny House and also the lives of others who choose to live in Tiny Houses – there wasn’t enough time to go deep into Christopher’s story, his plans and his dreams beyond the consturction project, nor to truly understand how Tiny House dwellers make living in a Tiny House work. The film finishes with Christopher towing his newly built tiny house to his patch of land in the wilderness. But questions remain about how this house can really be home. What about food? Water? Fuel for the heater? Work? Is he intending to live in this dwelling, or is it actually more like a campervan for holidays?

For me, this movie was a beautiful story, and I felt like I could really connect with the reasons behind the choices these people make. If you want to see an inspirational look into the lives of people who choose to live differently, then this film is for you. But if you want to know more about the practicalities of Tiny House living, of what happens once the choice to live this way are made, then the film will probably still leave you with a number of questions.

Have you seen this movie? What did you think? Do you have any thoughts on Tiny Houses, or the Tiny House movement? I’d love to hear from you so please leave a message in the comments!

The Scandalous Plastic in Tea Bags – Who Knew?

Decluttering, Minimalism…and the Emotions that Get in the Way
Scroll to top