Until recently, I never gave much thought to the fact that goal-setting is a process. I’d simply decide on what I wanted the end result to be, and then hope that it would happen. As I write that down now, it seems so obvious that it isn’t just one step, and that you have to work at goals, but before you scoff at my foolishness, have a think… Have you ever set a New Year’s Resolution only to keep it up for about two weeks, and then set exactly the same Resolution the next year? And then the year after that? Maybe you haven’t, but there’s plenty of people who have, so I’m pretty sure I’m not alone!

The only thing I did that remotely resembled goal-setting was writing lists. I love writing lists. I particularly love writing to-do lists and having the satisfaction of being able to cross things off. Sometimes I even add a couple of things I’ve already done that day in order to be able to cross off extra things and feel super organised. But let’s face it, the things on these lists aren’t really goals. ‘Go the the post office’, ‘clear up the mess’ and ‘do the washing up’ are not goals. They are things that need to be done. There is a difference!

I’d justify this to myself by saying that I wanted freedom and spontaneity, and that these weren’t compatible with setting goals. Or I’d make excuses, saying I wasn’t sure what I’d be doing or where I would be living, so how could I possibly set goals? But of course, I still loved the idea that I’d be able to achieve the things I wanted to achieve… I just didn’t make the connection with goal-setting.

Last November I heard Tim Darby, one half of Ecoburbia, talk about goal-setting. He talked about a few methods, but what stuck in my mind was a routine that he called “3 1 5”. It’s the way that he makes goals for the next three months, one year and five years. He separates the goals into four categories: emotional and spiritual; financial and vocational; health, education and recreation; and friends and family. The idea is that it is revisited every three months, to review the old three month goals and set new ones and see progress towards the one- and five-year goals. If priorities have changed, then these goals can be changed too – nothing is set in stone. 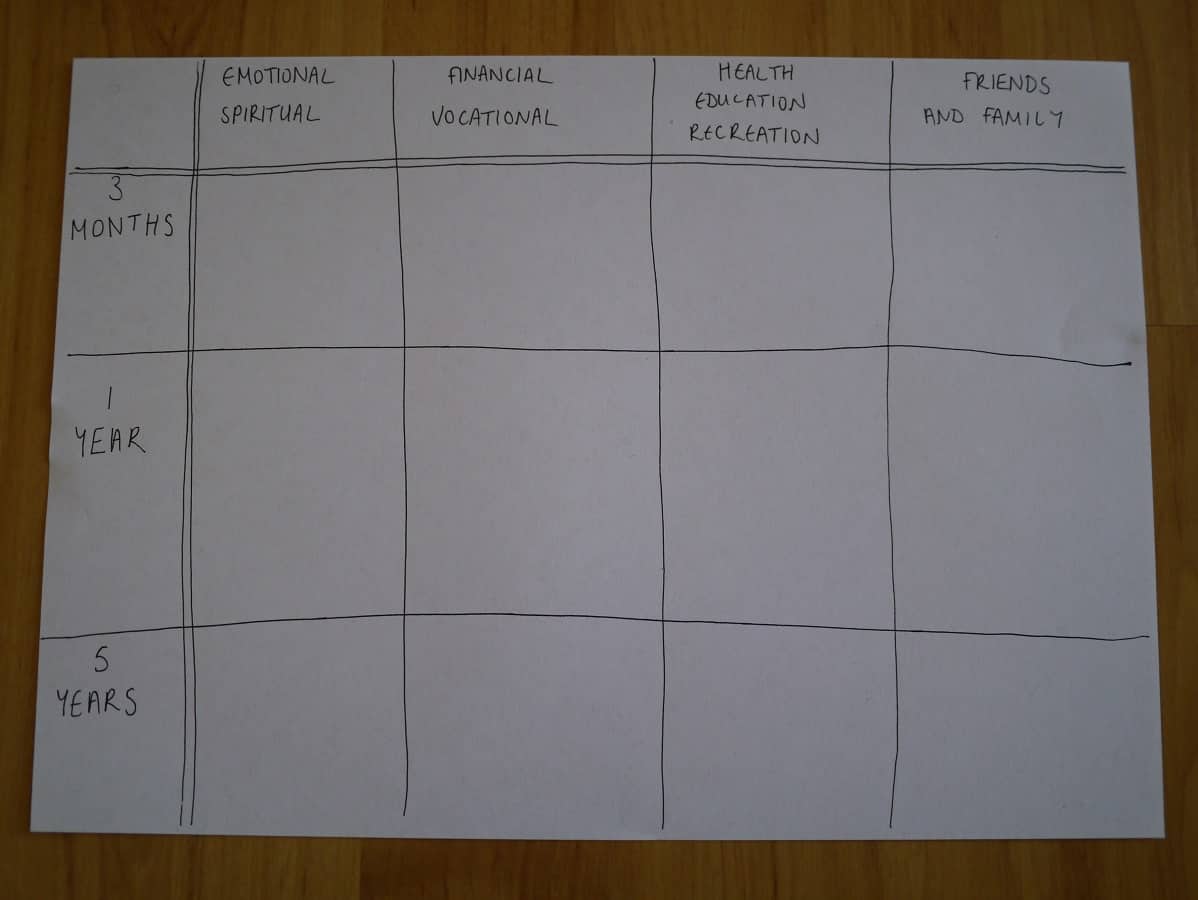 For some reason this really resonated with me. In fact there are probably many reasons. I could identify this ‘planning’ was lacking in my own life. I liked that it encompassed all aspects of life (it’s so easy to just focus on one area, particularly the financial one, and think that once that’s sorted it will be easier to sort the others). Revisiting it often made sense. I could see that it had clearly worked for Tim. And probably most of all, it seemed such a simple tool. I decided to have a go at setting my own goals in this format.

But I found it really hard.  In fact, I don’t even think I filled in a quarter of the boxes. I still really liked the idea, but I pushed it to the back of my mind.

And then, six months later, I found myself at another workshop with Tim where he covered exactly the same thing.

So I decided that I was going to attempt the matrix again, only this time I would actually complete it.

I didn’t find it any easier, but I haven’t given up. I say haven’t because even now, after a month of trying, I still have one box completely empty and another four that are pretty weak, that I would like to be better. But trying it again made me realise a few things.

1. The first one doesn’t need to be perfect.

Tim’s method is fantastic and the way he sets goals is truly inspirational, but I need to remember that he’s been doing it for a long time, and has perfected it over many years. My first (or second) attempt isn’t going to be like his. And that doesn’t matter.

2. It is as much about the process as the goals.

The fact I find long term goal-setting so difficult is probably a sign that it’s something that I need to learn how to do. And for my first attempts I’ve realised that I don’t need to worry overly about whether the goals are perfect, I just need to commit to writing something down! As I keep doing it, hopefully it will become easier, and if in three months I can say that I’ve achieved most (or all) of my three-month goals, then that will be the motivation to continue. And if I haven’t, that will be the motivation to try again – I can be very stubborn!

3. The goals may change.

When I first attempted this I think I was scared of putting the wrong things down, so I didn’t put anything down. I didn’t want to write things I might change my mind about (after all, five years is a long time) or things that I might not achieve. I didn’t want to fail, and I think this stopped me committing my goals to paper. But the second time I realised that if I don’t achieve my goals, it isn’t necessarily that I’ve failed, but that I set the wrong goals in the first place. I just need to get something down onto paper. Once the first goals are set I can begin to work towards achieving them, and if I don’t then I can question whether they are really the right priorities for me at all, or whether I should set different goals.

Setting goals doesn’t come naturally to me, but I love this method and I’m willing to give it a proper go. I like the way it forces me to think about what I want in one and five years, and not just keep thinking about the present. Of the three time frames, I actually found the five-year goals the hardest to set. And some of the categories have glaring gaps – which suggests I’ve not been paying enough attention to those aspects of my life!

One of my favourite things about this method is that it provides a link between the short-term goals (the lists I like to write!) and the long-term ‘visions’ I have for what I want in the future. It works both ways. I can question why I’m doing the things on my short term list – what is the bigger picture? But I can also look at the 5 year goals and ask if any of the short-term things I’m doing are actually leading towards this. If not, why not? It joins everything up.

It’s still too early to know whether I’m going to find this useful and continue it in the long-term, but I’m committing to a year. That means filling out the matrix another three times over the next 11 months. I’ll get three chances to review my three-month goals, and one chance to review my one-year goals. Hopefully by the end of the year I’ll be a lot better at writing them too.

And in other good news, whilst writing this post I finally came up with something for my last empty box. So my first matrix is compete. It only took 8 months! Hopefully the next one won’t take quite so long. In fact, maybe that should be a goal…

Plastic recycling: What Those Numbers Actually Mean
Scroll to top