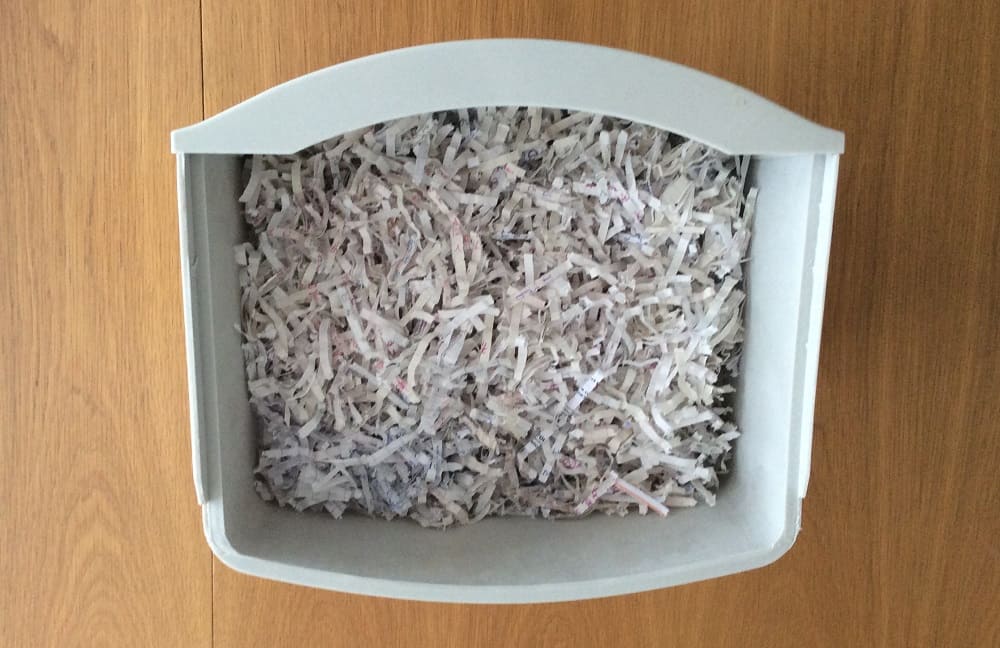 This time last year I was back at my parents’ house in the UK, being forced to confront all the stuff I’d stored there for “safe keeping”. It was an interesting lesson in why hoarders shouldn’t get second chances, and I got rid of a lot of items, but I’m sorry to say, there were still several boxes remaining. 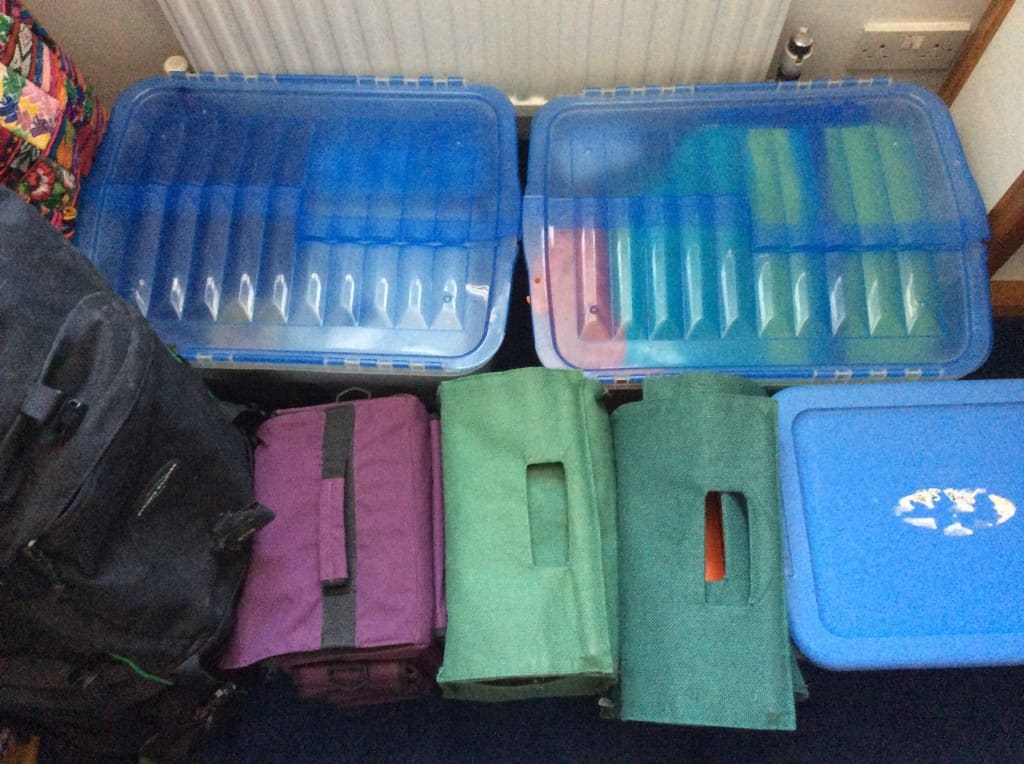 Everything that remained in storage at my parents’ house as of September last year. Yes, after the decluttering took place!

Fast forward a year and I’m back at my parents’ house (we went back to the UK for my brother’s wedding). My parents’ house is absolutely full to the brim with stuff, and as I’ve learned to let go of more and more, I find the amount of things they have more and more noticeable. It should be noted that whilst I always say that it’s far better to lead by example when trying to encourage change in others, and we shouldn’t preach or tell or instruct, I always fall down on this when it comes to my mum. Somehow the rules don’t apply! Maybe it’s because I only see her once a year, I feel I haven’t got the time to spend demonstrating change and waiting for it to catch on, and need to get right in there… or maybe it’s because I internalise all my preaching and bossy-ness and have to let it out somewhere! I hadn’t been back there two minutes and I was trying to persuade her to begin decluttering. (They tell me they like the clutter. Well, my dad does. I’m not completely convinced.)

Of course it wasn’t long before my parents pointed out that rather than declutter their stuff, I had a whole load of stuff of my stuff in their house that I should be focusing on. And they were right.

Well, what a difference a year makes! Sometimes it feels like we’re plodding away and not much is changing, but being put in exactly the same position a year later really made me realise how far I’ve come. Somewhere, in this past year, there’s been a shift. I didn’t notice it happen – maybe it was gradual there was nothing to notice – but it has happened. This time, when faced with decluttering, there was no internal struggle. There was very little debate. This time, I was ruthless.

Why was it so much easier this time round? Probably because decluttering is a skill I’ve been trying to master for a while, and I’ve learned a few lessons along the way.

Anything that’s been in a box for a year (or really in my case, for almost 4 years) cannot be needed. Rather than opening boxes with the excitement of seeing what’s inside (it will cloud your judgement!), remember – you’ve long forgotten what’s inside. Instead, focus on the best way to pass these items to good homes. Stay detached. If you’re really brave, don’t open at all. Send straight to the charity shop!

2. If you’re passionate about zero waste, you can’t keep stuff in storage long-term (especially at someone else’s house).

Sometimes we find things in boxes that we like, that we remember fondly or we wish we had use for. That doesn’t mean we need them. If we liked them or needed them that much, they wouldn’t be sat in a box! If you really want your items to have value, give them to someone who needs them and will use them. Sell them on eBay or give them away on Freecycle or to the charity shop. Items sitting in storage gathering dust is just as much a waste of resources as sending something to landfill.

Keeping items “just-in-case” is a waste of time (and space). Especially if the “just-in-case” items live in a box in storage. If you suddenly need the item, will you even remember where you put it? Let someone else get good use from your items. If you really need something you previously got rid of, you can borrow it, or buy another one second-hand when you need it. Chances are though, you won’t.

4. We live in the present, not the past.

Old photos of places we no longer remember, diaries and letters from years ago and other collected paraphernalia remind us of the people we were, but don’t necessarily represent the people we are now. If they bring up feelings of regret or sadness, are completely cringeworthy, or evoke no feelings at all, they have served their purpose. Let them go. We don’t need to be reminded of who we used to be! We live in the present, not the past. We should be creating new happy memories and living in the moment!

5. No matter how hard you find letting things go, if you keep trying you WILL succeed.

I was a natural hoarder. I’d collect, and accumulate, and hang on to things. It was how I was brought up, I’ve realised – there was always the option to store something if I wasn’t sure what to do about it. As a result, I never learned the art of decluttering or letting go. It’s been a hard lesson to learn. It takes time, and patience, and perseverance. But like all new habits, the more you practice the better you get. Keep flexing the decluttering muscle, and each time it gets a little stronger. I’m not perfect, not by any stretch of the imagination, but I’ve come a long way simply by not giving up.

So… what became of that pile of stuff? Most things went straight into boxes to the charity shop. A few (more specialist)  things went onto eBay…I felt there was more chance of connecting them with a better owner this way.  A couple of things came back to Perth with me (they may yet be decluttered). Those old diaries of my early teenage years?

Pages of paper filled with teenage angst are memories I’d rather forget! Those diaries served a purpose at the time, but their job is done. I felt rather excited that these pages will begin a new life as compost, and I will no longer be weighed down with awkward memories.

Shredded and added to the compost pile, and along with them a lot of teenage angst I’d rather forget!

With every item given away, sold, donated and shredded, I feel lighter. Stuff weighs you down. It’s a burden. Especially stuff spread across continents, and stored in other people’s houses.  It’s a relief to know next time I visit my parents for a holiday, I won’t be crawling through the storage space hunting down boxes to sort. I won’t be wasting time contemplating whether to keep things I’d already forgotten about. There will be no guilt at items left languishing.

It’s been a long road, this journey to a life with less stuff, and it’s been hard work, but I finally feel like I’m turning a corner, and that I’m seeing the benefits. Benefits like more time. More freedom. It makes me wonder… why did I ever think a bunch of stuff was more important than these?!

Now I’d love to hear from you! Confession time… do you have boxes languishing in storage, in your attic, garage, spare room, or worse – a relative’s house?! How many of them are filled with “just-in-case” items or stuff that you can’t even remember?! what is your biggest barrier to letting go? Or are your closets free of clutter? If so, what tips do you have for letting go of items? What has worked best for you? Anything else you’d like to add to the conversation? Please leave your thought in the comments below! 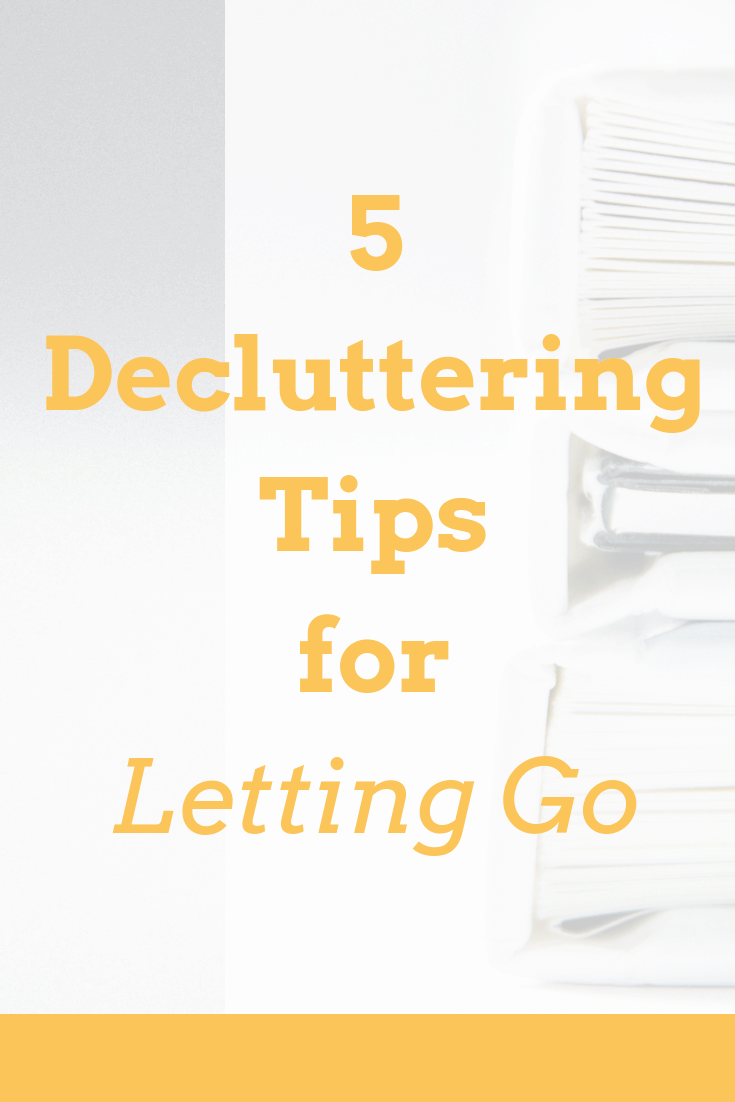 Food Waste That You Can “Re-Use”

A Minimalist Wardrobe: The Ideal…and the Reality
Scroll to top