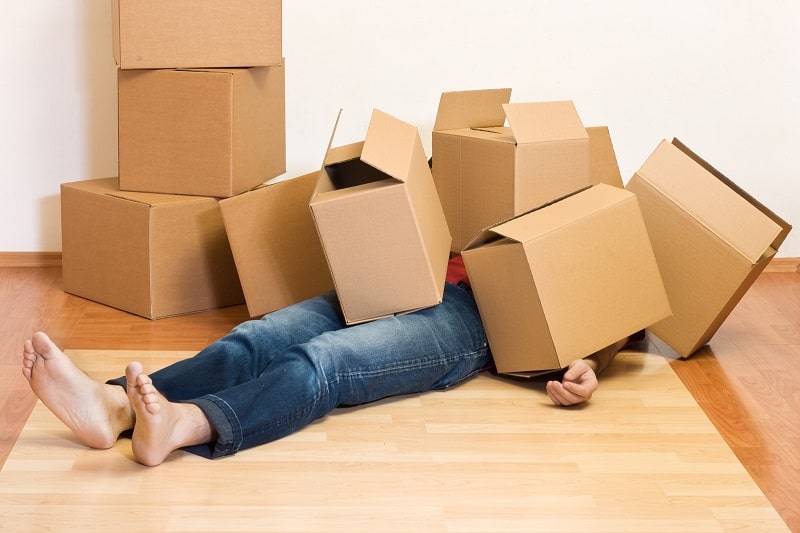 Over time, we accumulate stuff. Maybe we buy it, maybe it’s given to us, maybe we find it. Eventually our space becomes too full and too cluttered, and we need to do something about it.

One solution is to find some more space. There are a few options here. We can move to a bigger house or apartment, we can rent self-storage or a garage, or if we have amenable parents or friends, we can stash our stuff at theirs.

Getting more space costs us – time, money, or both. A bigger house or flat will mean higher costs, or if we decide to live further away in a cheaper neighbourhood then we spend more time travelling (and on fuel). Plus we have to spend time sorting and boxing our stuff and lugging it across town. If we’ve left our stuff with our amenable friends, there’s also the fear factor – the fear that they’ll appear on our doorstep in a few months with all of our stuff because they’re sick of tripping over it.

Plus this stuff cost us in the first place. If we took the time to look for it, and buy it, it cost us. If it was a gift, it cost someone else their time and money. Also, if our stuff was brand-new, there’s an environmental cost too. The raw materials needed to be mined or harvested, transported, processed, assembled, packaged, shipped, displayed and sold in order for us to have it.

Too much stuff also affects us in other ways, too. Clutter can affect our health. Clutter harbours dust and mould, which we breathe in. It makes us stressed and drains our energy. It can be a fire or trip hazard. Having a messy house that’s too full of stuff can be embarrassing, and make us ashamed to invite friends or family over, meaning we can become more isolated. In extreme cases, people have literally been killed by having too much stuff (I’m not going to provide any links but if you don’t believe me, google it.)

We can become slaves to our stuff. The more we have, the more it demands of us, and we end up trying to make our stuff happy. We spend time cleaning and dusting, rearranging and polishing. We buy more stuff to improve our stuff (a new display cabinet to show off our stuff, a bigger wardrobe so our clothes aren’t so squashed, a new addition to our ‘shiny things’ collection that makes it just that little bit more splendid). It is all consuming.

Of course, there’s another way to deal with having too much stuff.

Getting rid of some of it.

It sounds fairly simple, but it’s something I struggle with. Stuff can have a pretty tight grip on us. Living with my boyfriend in our one-bedroom flat – the smallest place I’ve ever lived in – for the last 18 months has been a great experience in living with less. Slowly but surely though, the amount of stuff has built up and the flat is currently feeling less than zen.

We did think about moving into a two-bedroom place, but it would cost us an extra $3000 a year. That’s a lot of money to spend on an extra room to keep all our stuff in. That money could be spent on a pretty amazing holiday. There was no contest. We’re going to stay where we are and I am going to learn how to declutter.

We’ve had a couple of attempts at decluttering so far, with mixed success, and I’ve learned some valuable lessons. Our first attempt was dedicating a weekend to decluttering, where I mostly just got impatient that our flat wasn’t decluttered already. In reality I didn’t really do much to assist the process. We got rid of one box of things. After reflecting, I decided to try a different approach.

Lesson 1: It’s not enough to want to declutter, no matter how much you desperately want it. You have to put in the physical work too.

Lesson 2: Don’t expect miracles. If you’re new to decluttering, or you’ve been a hoarder all your life, you’re not going to change in one weekend. Change takes time.

Lesson 3: If one method doesn’t work for you, try something else until you find something that does.

My next idea was to try to get rid of 100 things by taking smaller steps, and getting rid of 5 things a day. We gathered together a few bits and pieces for the charity shops and Gumtree, and we recycled some glass and cardboard that we’d been keeping (sorry, that I’d insisted we keep) in case they turned out to be useful. Excluding the rubbish and recycling, we got rid of 36 things. Not the 100 I wanted, but we did clear some more stuff.

Lesson 4: Focus on what you did achieve, not what you didn’t, and celebrate your successes, however small they may seem.

Lesson 5: If it all gets too much, take a step back. Come back to it when you feel ready again.

I decided to take some time out, and now I’m feeling re-energised and ready for another attempt. I’ve decided that this time I’m going to focus on clutter. All the stuff that seems transient, and really should have a permanent home, yet somehow doesn’t actually seem to.

I’m going to tackle the clutter from the other side. I’m going to have a major thorough spring clean, one section of the flat at a time. Rather than imagining a clutter-free space, the idea is that I’ll actually create it. Rather than being a conscious thought, it’ll be a physical manifestation. Maybe if I can see it with my own eyes, then my conscious mind will know what’s going on, can let my subconscious mind in on the plan and we’ll all be on the same page. I’ll let you know how it goes.

I don’t have all the answers to successful decluttering, but I’m learning all the time, and I’m hopeful that if I keep at it, it will get easier!