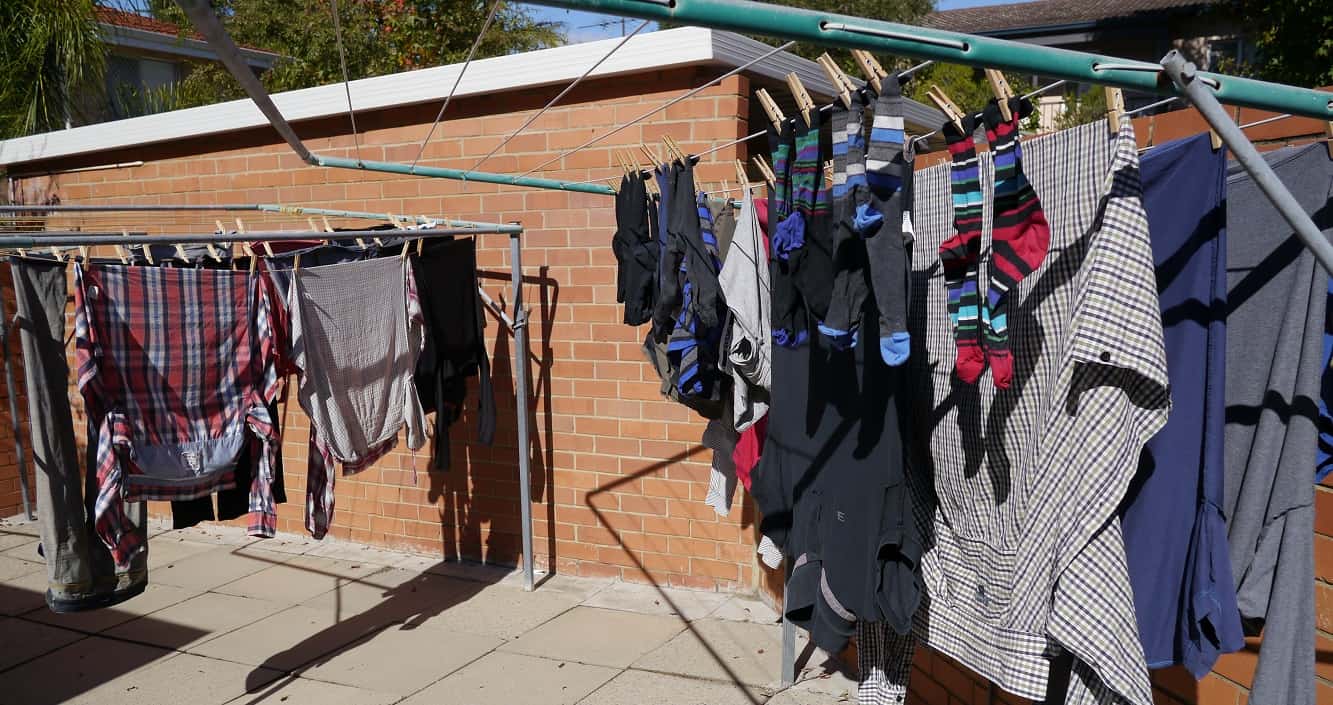 I had a really great weekend. Friday night sushi and a rare trip to the theatre with my boyfriend (Death of a Salesman by the Black Swan State Theatre Company), a Saturday afternoon afternoon trip to Fremantle then dinner with friends on Saturday night, and lunch with family on Sunday afternoon. Busy, fantastic company, amazing food, loads of fun.

But today I am paying the price for having had such a fun weekend, by having to face up to all the housework and boring stuff that didn’t get done. Particularly, the washing. There is so much washing! Having just put the third load of the morning on, I am puzzled how just the two of us can generate so much of the stuff.

I am puzzled mainly because neither of us is a big fan of clothes shopping. We’ve got things we’d rather do with our time and spend our money on than buying shiny new garments from soulless shopping centres. I try to buy most of my clothes second-hand, usually using eBay (which I prefer to charity shops). I reckon I probably buy 75% of my clothes second-hand. Moving countries definitely helped with this as I no longer know any of the stores or brands, and I decided I wouldn’t bother getting to know them.

And whilst I don’t feel like I buy a lot, I must confess that when I find a bargain on eBay (or the charity shop or wherever) it is very hard to resist. I am a huge fan of bargains. And in these places there are many bargains to be had.

On the other hand, I hate waste. Which means I hate getting rid of stuff and throwing things away. This can be difficult when you live in a tiny flat and you don’t have any space for ‘stuff’ that you won’t use and don’t want. I’m happy to give stuff to the charity shop, or sell it on eBay or Gumtree, but when it comes to clothes I usually wear them out before I’m ready to let them go. So eBay, Gumtree and the charity shop aren’t options. (Yes, that’s right, the charity shop won’t want it either. If it’s only fit for landfill, that’s where it will end up. Who are you trying to kid?! And if the charity shop send it to landfill they may end up paying a fee, so do them a favour and don’t dump your rubbish in them!) But even then I can’t bring myself to throw them out. After all, things only become waste once you commit them to the rubbish bin.

So in the 18 months that I’ve lived in Perth, I have slowly but surely been accumulating clothing. And I have only thrown one thing away. And that was traumatic, even though the item in question had a hole (which I convinced myself that once I learnt to sew and had a sewing machine I would fix), didn’t fit, and was about 10 years old. In fact it only made it to the bin at all because my boyfriend, who was fed up with it sitting in the ‘I’m thinking about what to do with it’ pile, put it there, and it only stayed there because he then covered it with onion peel and other unpleasant kitchen scraps to stop me trying to rescue it. Actually, I don’t know if that was deliberate, but it did work. Just.

One of the downfalls of having far too many clothes hit me as I was pegging the umpteeth thing onto the line this morning. Having to wash, fold and put away all this stuff. I know you could argue that I’d be doing the same amount of washing… but do you ever find yourself needing to wash stuff because it’s been in the wardrobe far too long and smells dusty? Or – and this happens to me all the time – washing stuff that doesn’t need washing because it somehow managed to get undetected into the washing pile? This generally happens when I don’t know what to wear, get three things out and leave them on the bed, then come home and throw them off the bed, at which point they end up getting picked up with everything else and put out for washing. If I didn’t have so much choice, this wouldn’t be a problem.

I was talking to a friend the other day about her ‘one in, one out’ rule. If she buys a ‘new’ item of clothing (new for her but second-hand) then she has to get rid of something else. It sounds easy enough. But what if you’re faced with the bargain of the century at the charity shop? It’s so easy to say, oh but it’s only five dollars…

So instead of just picking it up, my friend thinks, “which of my items am I happy to get rid of in order to buy this?” And after she’s mentally gone through everything in her wardrobe, if she’s not prepared to get rid of anything that she already has, she puts it back.

So starting today I’m adopting this approach. ‘One in, one out’. And both things have to be similar, so no swapping old socks for a new skirt.

This is the first step. Hopefully this will stop me accumulating more stuff. The next step will be making peace with myself and throwing some things away. But I’m not quite ready for that yet.

My 100 Things Challenge
Scroll to top