We are moving out of our flat this week, and our rubbish bin won’t be coming with us. We won’t be replacing it either. The reason? We simply don’t create enough rubbish to fill it.

I realised a few months ago that I was spending more time taking things out of the rubbish bin than putting things in it. The odd tissue. Sweepings from the kitchen floor. Onion peelings and spent corn-on-the-cobs (we had an incident with the bokashi bin where we ran out of bran, and it grew moldy and very smelly, and my husband was afraid to take the lid off. With reason – it stank).

All of these things could go in the worm farm, but it was almost a reflex to empty the dustpan or drop things into the bin. (Hence then having to take them back out.) There was also the odd non-recycable thing of course, but not enough to justify keeping a bin in our fairly small kitchen.

As a test, we moved the bin outside onto the balcony to see if we missed it. 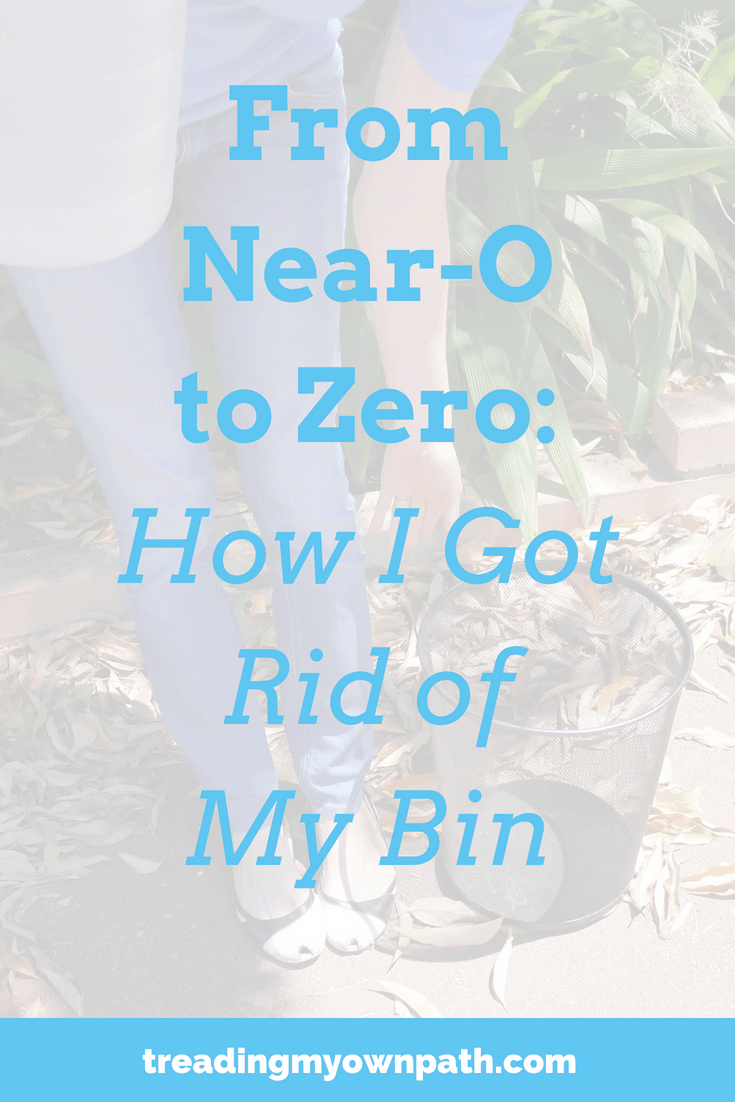 This is a long way to come since 2012, when I first heard of Plastic Free July and began my plastic-free living adventure. Back then I thought I was being a responsible consumer by purchasing eco-friendly washing-up liquid in a recyclable plastic bottle (and then recycling it), and taking my own bags to the shops. I thought that filling my recycling bin up to the brim every week was a good thing.

Little did I realise that this was just the beginning of what I could be doing.

I’d never heard of zero waste back then, or even being plastic-free, yet something about the idea of giving up plastic for a month stirred my consciousness….and my conscience! Deep down, I knew that plastic was a problem. I knew there was too much of it in our environment; I knew a lot of it was completely unnecessary; I knew it was a waste of resources.

Yet somehow I’d never made the connection that I was part of the problem. I was directly contributing to these issues by the way I shopped and the packaging I bought; I was also supporting this system and saying “this is okay”.

I was part of the problem, and I could be part of the solution. I could do things a different way. I could ditch the disposables, reuse what I had and refuse new plastic altogether. I decided then, in June 2012, that I wasn’t just giving up plastic for a month.

I was giving up plastic forever.

With no real idea of what to do, but with complete conviction in my heart that this was the right path to be following, and all the enthusiasm and determination that comes with embracing a new challenge, I set out changing my habits.

First up, I started switching my packaging to paper, card and glass. Most fruits and vegetables were easy to find loose, and those that only came in plastic, I simply didn’t buy. I found pasta in cardboard, chocolate in foil and paper, and toiletries in glass bottles.

Not having a car, I carried my shopping home. I noticed how heavy my shopping had become now I wasn’t buying plastic. I also noticed how bulky the glass jars were, and the cardboard boxes. I became aware of packaging – how much of it I was using – for the first time. When everything was in plastic, I hadn’t noticed. It was so light and stealthy!

Around the same time, about two months in to my plastic-free living adventure, I discovered glass isn’t even recyclable in the state we lived in. It has to be trucked to the next state, some 1500km away. Not all glass collected from recycling bins is trucked there either; some is sent to landfill as it is more cost-effective. Some glass was crushed and used as road base – not quite the virtuous cycle we’re sold!

This discovery totally shattered my presumption that glass was a responsible alternative to plastic. It felt just as wasteful as using plastic. I decided that no packaging at all was the best option, and began to work towards that. 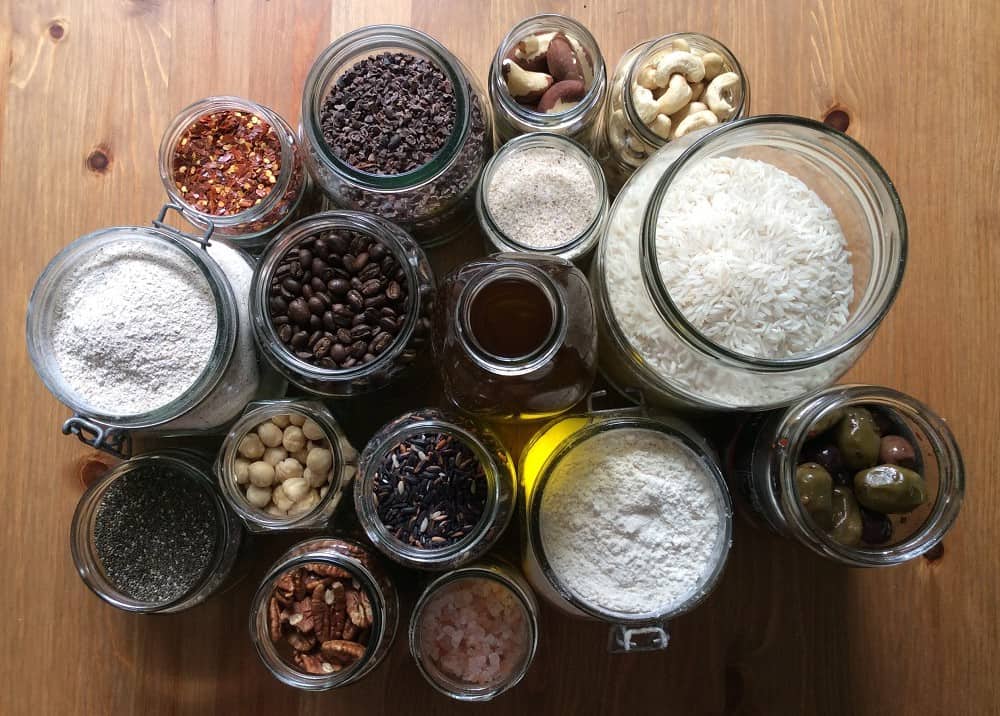 I reconnected with Farmers Markets, and tracked down the local bulk stores to buy my groceries without packaging. I found soap and liquid cleaning products in bulk. I took my own containers to local delis and to my delight, found that they were accepted everywhere I went.

One ingredient or product at a time, I worked on finding a packaging free solution.

It wasn’t a quick process; it took me 18 months to eliminate most of the packaging from my home. I didn’t tackle everything at once – as things ran out I’d look to replace them.

Some things were stubbornly difficult to find, and so I learned to make my own, find an alternative…or simply go without. We looked beyond food and toiletries to other areas of the house, borrowing rather than buying, or shopping second-hand if we really needed something.

The hardest thing for me was figuring out what to do with all the food waste. Eating lots of vegetables and making lots of things from scratch left us with lots of compostable waste…but no compost bin. Living in an upstairs flat, there wasn’t anywhere to set up a compost bin, and we don’t have any local collection points. Without a car it wasn’t practical to drop it off anywhere.

We have two worm farms but they can’t eat everything that we produce. Eventually, after a couple of false starts, we finally embraced using a bokashi bin for all the food scraps that can’t go in the worm farm – onion peels, lemon skins, spent corn cobs and avocado skins, for example – and this reduced our throwaway food waste to zero.

As the contents of our bin dwindled more and more, I became more and more determined to eliminate the final bits and pieces – however small! We have a junk mail sticker on our mail box but the odd thing sneaks through – I became militant in returning to sender. No free plastic pens required here! We check the fruit and veg we buy doesn’t have plastic stickers on it before we get it home.

If we’re offered any packaging, we decline; if we’re given it, we hand it straight back. We refuse receipts. All little things, but little things add up. 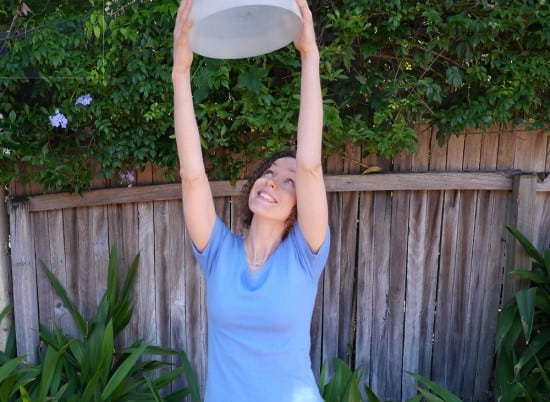 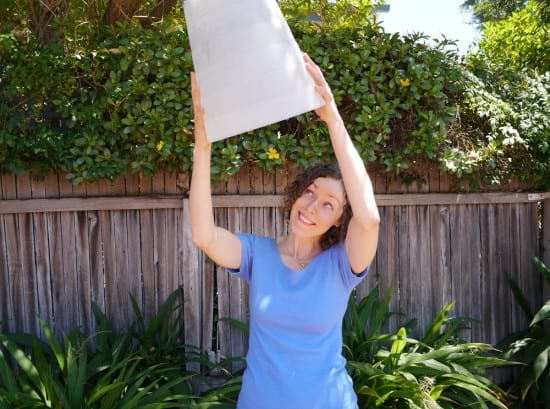 I’m not the first person to give up my rubbish bin (I’m pretty sure that was Bea Johnson, who started her zero waste journey way back in 2008). The great thing is, I know I won’t be the last, either.

Choosing a lifestyle that’s healthier, with food that’s fresh, natural and seasonal, that embraces community and supports local, that teaches new skills and encourages creativity, and that doesn’t harm the planet… what’s not to love? No wonder the zero waste movement is growing every day.

For me, getting rid of my bin means I’ve reached the tipping point. We are creating so little rubbish that it no longer makes sense to keep a container in the house specifically for storing it. Despite giving the bin up, I am sure I will still create waste in the future. I’m not perfect. I have things in my house that I purchased long before I began to think about what would happen to them at the end of their lives; things that aren’t recyclable, or compostable. Clothes that aren’t biodegradable. I choose to keep them until they are used up, life expired, but eventually I will need to dispose of them.

I intend to choose differently next time around. After all, we can’t worry abut or dwell on the choices we made in the past; but we can concentrate on making better choices in the future.

Now I’d love to hear from you! Have you embarked on a zero waste journey of your own? Are you planning on getting rid of your bin, or do you have another goal in mind? What have been your biggest challenges and greatest successes? Are you yet to try the plastic-free or zero waste path, and is the new year tempting you to give it a go? If not, what is holding you back?! What compromises have you had to make along the way? Please tell me your thoughts in the comments below!