This time last year, the head of sustainability for Ikea announced that we’d reached “peak stuff”. (Interesting, then, that rather than shut up shop and consider a job well done, Ikea plan to double sales by 2020.) For many years, in the weeks post-Christmas, I’d feel a little like that myself. I’d have a heap of new stuff, but I’d still have all the old stuff sitting there too – and much of it was still perfectly usable.

I’d definitely reached peak stuff – but what to do about it? What about the waste?

Too much stuff creates clutter and stress, but it took me a long time to realise that too much stuff is also a huge waste of resources. Anything we own and don’t use is a waste. I was kidding myself thinking that I was reducing waste by keeping stuff that I might use at some point in the future (but probably wouldn’t).

And so, I learned to declutter. Decluttering does not come naturally to me, but with practice, it becomes infinitely easier. The most important lesson is to be honest with yourself. Forget about what others think, what happened in the past, or what might happen in the future, and ask yourself truthfully: Right now, do I really need this? 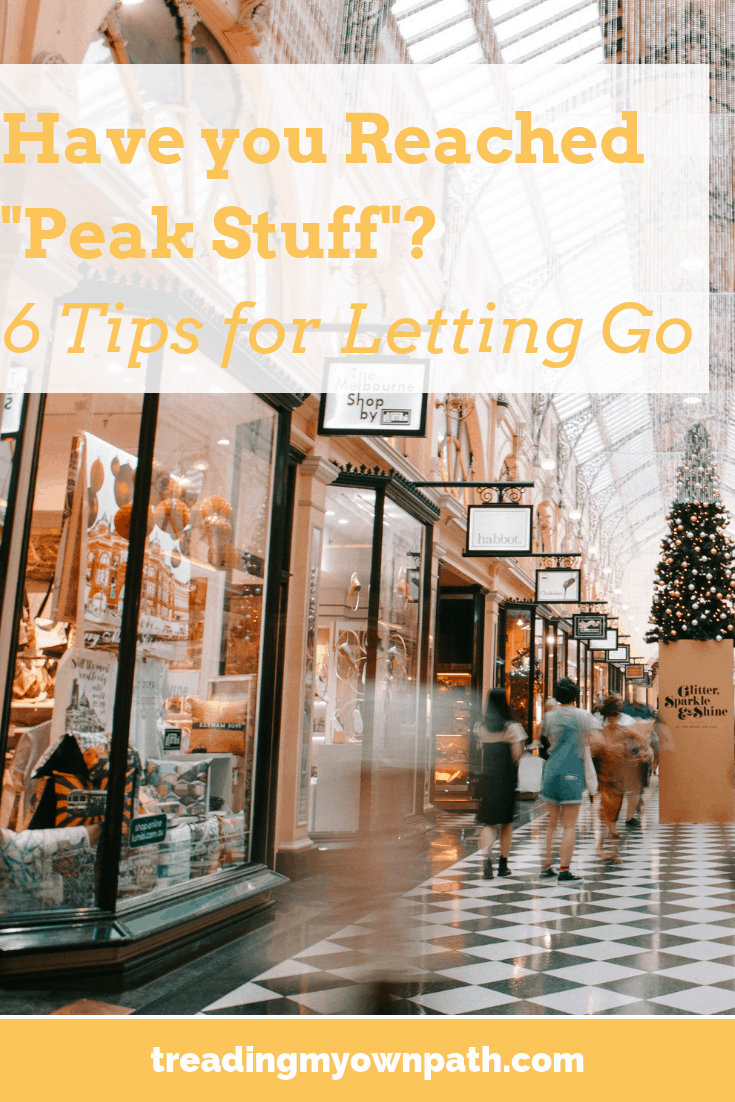 1. The Meaning of the Gift is in the Giving

Receiving a gift doesn’t mean that you need to keep the gift if you don’t want it, don’t like it, or don’t need it. Be grateful and thankful that you have been given it, and appreciate the sentiment. That is enough.

Of course, you don’t need to tell them that you don’t like the gift, or that you gave it away. There is no need to offend anyone. People rarely remember what gifts they gave others.

Often we hold onto things because we think someone will be offended if we give it away, but it is likely that they have already forgotten.

2. Will it Really be Useful?

Will the gift really be useful? This isn’t the same as “might be useful” or “I can think of an occasion which could happen where I might have a use for this”.

If it isn’t going to be useful right now, or in the foreseeable future, then keeping it is a waste. There is someone out there who needs what you have, and will use it, and it is far better to pass it onto them.

3. Just in Case is not a Reason

I used to keep so much stuff “just in case”. I’m not talking about lifesaving equipment here, I’m talking about random kitchen gadgets and trinkets and other stuff. You never know, we might need to de-stone cherries or translate a Russian sentence in the future, but keeping things for all possibilities just isn’t practical.

I have given away things and later I have thought, ah, if I still had that, I could use it now. A really thick jumper on a very cold day. A can opener when I needed to open a can for the first time in two years and it didn’t have a ring pull.

But I never went to the shops to buy a replacement. Sure, I could have used these things, had I still owned them, but I made do without. I guess I didn’t really need them after all.

But if there is nothing wrong with the first one, there is no need for a second.

I used to struggle with this. I knew the first one would wear out/break eventually, and then the second one would come in useful. But I never knew how long this would take – it could be years. In fact, sometimes it was years, and the shiny new replacement was already old by the time it actually got used.

It would have been much better to wait until I actually needed a replacement, and choose something that I liked and was useful for me now, not the me of several years ago.

Sometimes the opposite would happen. The new one would make the old one look tatty, and the tatty one would be cast aside in favour of the new (there’s a name for this: the Diderot Effect). Only, I’d know that the old one wasn’t life expired, so I’d keep it for when the new one wore out. It would languish in a back cupboard, taking up space, making me feel guilty, and going unused.

Now, I’m much more ruthless. If I need one, and I have two, I make the choice straightaway. Do I keep what I have, or do I keep the new one? One stays, and the other goes. Because keeping both is a waste.

I liked the idea of being many things, and doing many things, but some of them weren’t real me. Letting go of fantasy me was actually a relief. There are already so many things that I want to do, and I don’t have time for them all.

Allowing myself to let go of fantasy me has given me more time and space to focus on the things that I’m already doing, or the ones I really want to do. It’s reduced my expectations of myself and made me less stressed.

6. What is the WORST That Can Happen?

Getting rid of something you don’t want, don’t like, and don’t need – what is the worst that can happen?

The person who gave it to you might find out. They might be offended, but that is probably more about their realisation that they made a poor choice. They might be upset, for the same reason. They might decide not to buy you anything in future (if you’re giving their presents away anyway, that might not be a bad thing).

You might have to tell a white lie. You may be asked where the gift is, if you’ve used it yet, or whether you are willing to lend it back to the giver. Of course, you can tell the truth, but if you don’t want to hurt any feelings it may be better to avoid this. I left it at work. I lent it to a friend. It broke.

You might realise that you actually needed it after all. The likelihood of this happening is tiny, but yes, it could happen. In which case, you’ll need to get a replacement. You can probably pick one up second-hand, and you may even be able to borrow one. Worst case you’ll have to go to the store and buy one.

For many of us, letting go isn’t easy. We ties our hopes and dreams and aspirations up with our things, or we worry about the waste (be it the waste of resources, money ,time or effort on behalf of the giver). We let our emotions and concerns and fears control how we treat our stuff. That’s a lot of baggage to let go of. But underneath all of that we know the truth. The truth as to whether we really need it and we will really use it. If you feel that you’ve got a little too much stuff, ask yourself truthfully – are you telling yourself any of these excuses? For many of your things, the answer may be no. But it’s likely that for some of these things, the answer will be yes.

Now I’d love to hear from you! Are there any other tips you’d like to add to this list? Which is your favourite? Are there any that you struggle with? Which is the hardest for you to resist, and which is the easiest? Do you disagree with any of them? Do you have any other thoughts on letting go and peak stuff? I’d love you to be part of the conversation so tell me what you think in the comments below!