I’m halfway through my Zero Waste Week challenge, and things have been going pretty waste-free, although I must confess – some waste has managed to sneak in!

Things went well on Tuesday. I received my second thermal paper BPA-lined eftpos receipt (to tell if a receipt is printed on thermal paper, you can rub a coin or your fingernail on the paper – if it darkens then it is thermal paper). Much smaller than the Post Office one, but still waste. 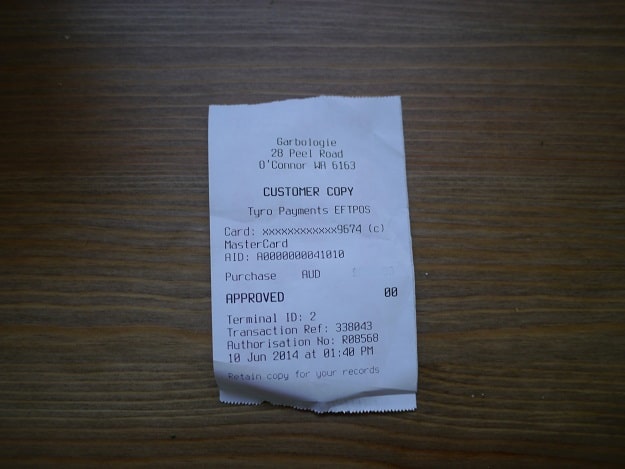 No more waste came until Tuesday night, when one of our bamboo toothbrushes died. The thing with bamboo toothbrushes is that they decide when they’re fit for the bin, by releasing all of their bristles into your mouth. Yuck. Loose bristles are not pleasant. Once the bristles start falling out there’s no way I’m going to continue using it. Seriously, it’s that bad. Usually the toothbrush would end up in the bin – ironic as it’s meant to be environmentally friendly. Thing is, I can’t compost it because of the plastic bristles. What I could do is chop the head off and try to compost the handle. Alternatively, I’m trying to soak the brush to see if I can loosen the rest of the bristles, so I can separate them and save on waste. 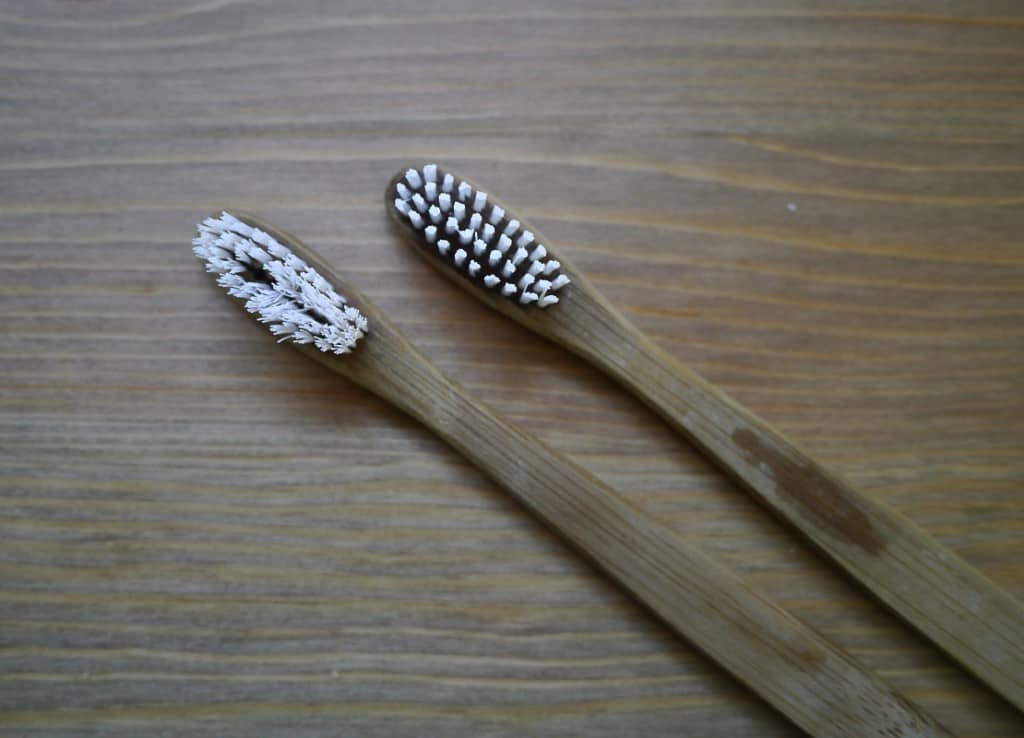 The old toothbrush on the left, and a new one 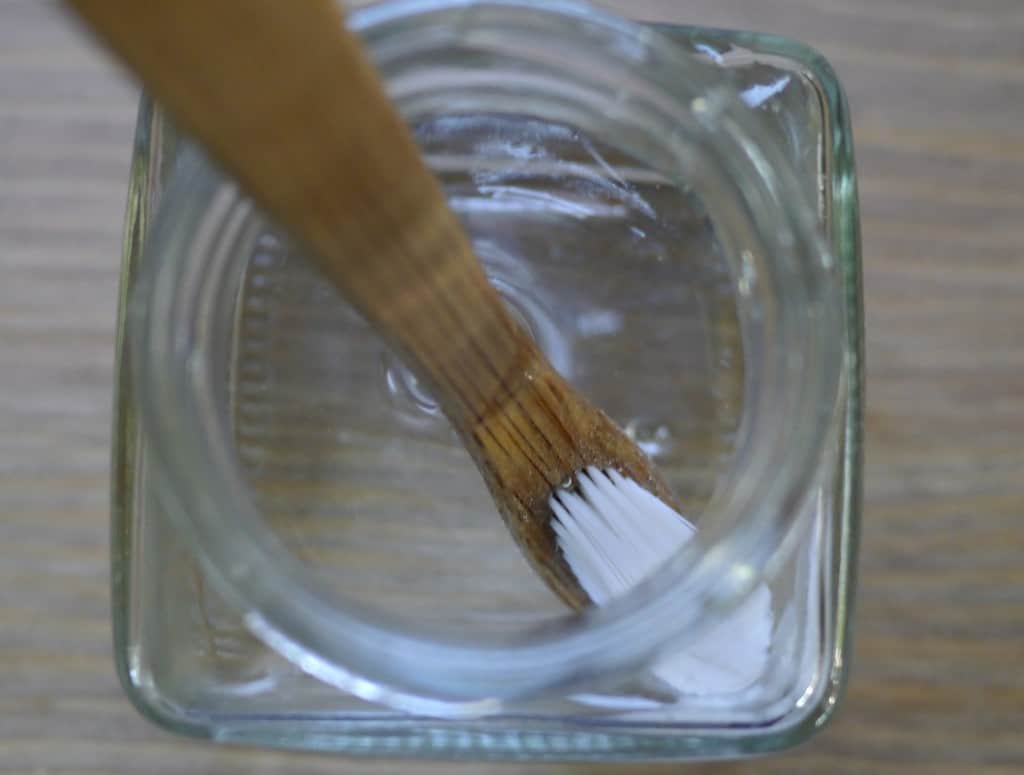 Soaking to see if I can loosen the bristles and compost the wooden part.

Wednesday came, and we received our toilet roll order – all 48 rolls of it! The box will get reused, and the paper and rolls get added to the wormfarm. 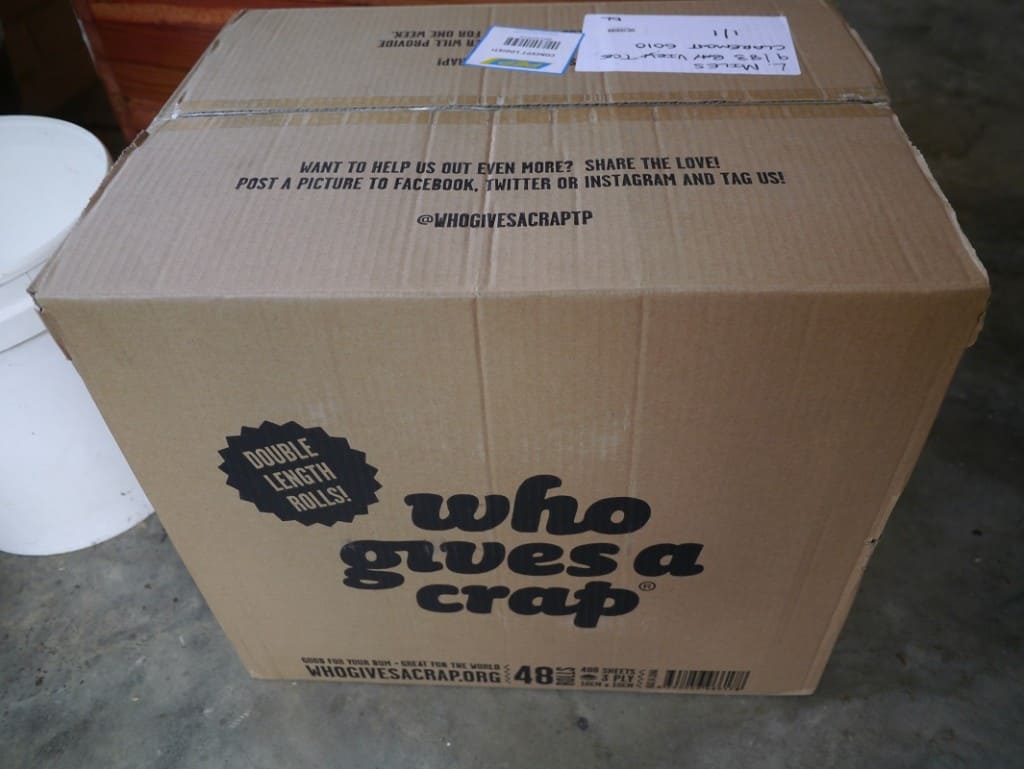 I should probably add that my zero waste week does not extend to toilet paper. I’m still using regular toilet paper in all its single-use disposable glory! Even if it isn’t being sent to landfill, technically it’s waste as it’s going into the toilet, but reusable cloths are not happening in this house any time soon. Even if I was up for it (and I’m not), there is no way I’d convince my boyfriend!

I wonder if I had a compost bin whether I could/would compost my toilet paper?

We also received our first mail of the week – a letter with a label for changing the address on my boyfriend’s drivers license. In the past I’d recycle it, but now I’m going to feed it to the worms. What I’m wondering is what should happen to the cellophane window on the envelope? 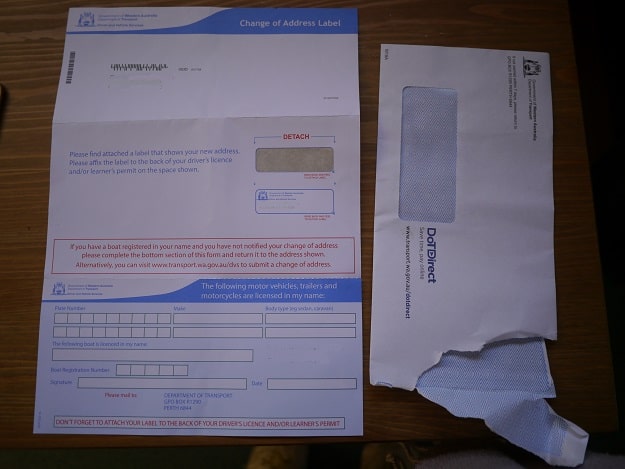 There seems to be some debate about whether the windows break down in a worm farm. According to this discussion, some do, and some don’t. In the interest of Zero Waste Week I’m going to give it a go.

We invited our neighbour over for dinner on Wednesday, and of course I cooked. I made everything from scratch: dahl, aloo gobi, coconut rice (I’m stlll trying to perfect a DIY coconut milk recipe) and parathas. As I’ve said many times, I buy everything in bulk, but for some reason we had a bag of wholemeal flour, and I finished it off. 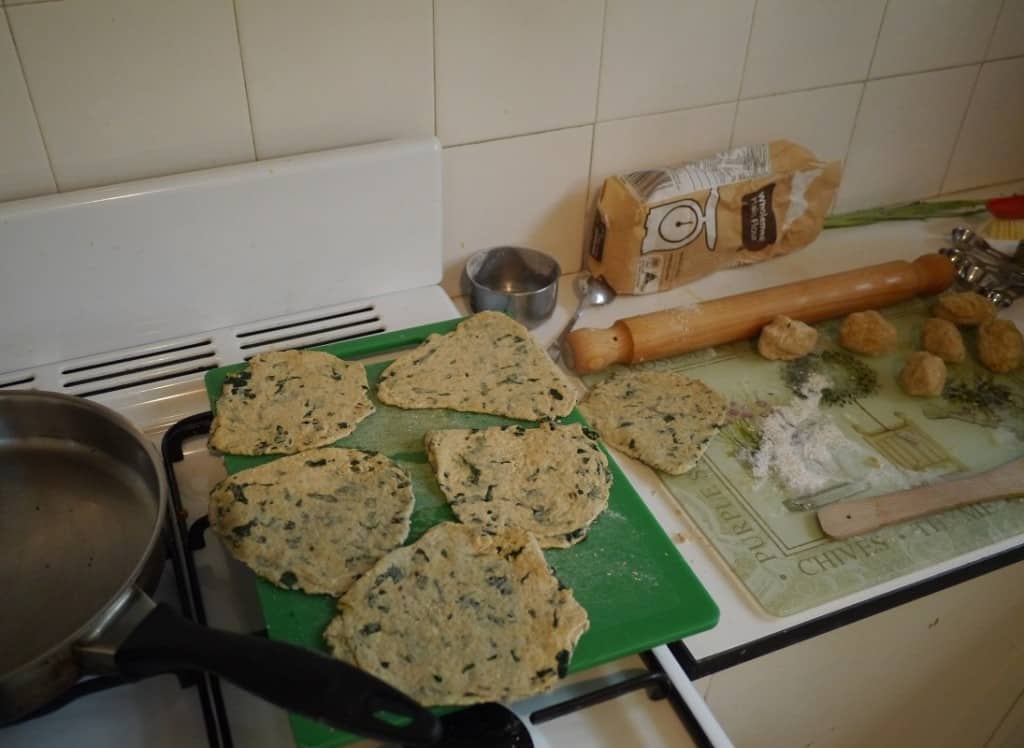 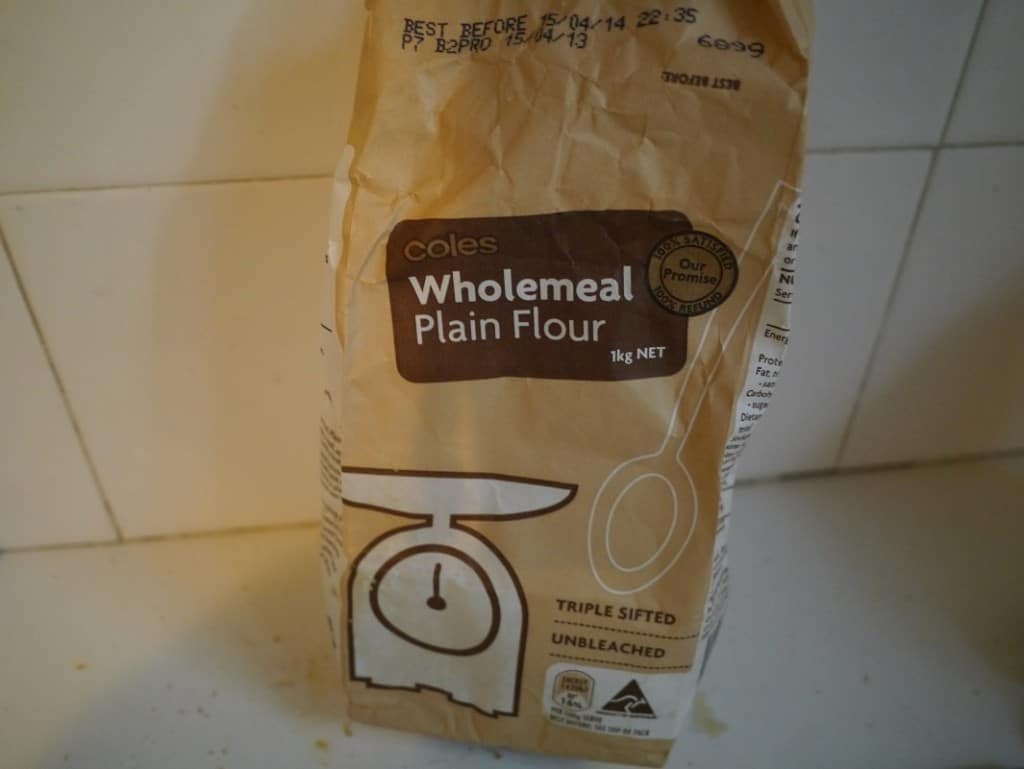 (I must have had it for a while, because I notice it was technically out-of-date: ah well!) So what did I do with it? Shredded it up into strips, to make wormfarm bedding! These guys have to have somewhere to rest in between all this extra eating I’m making them do! 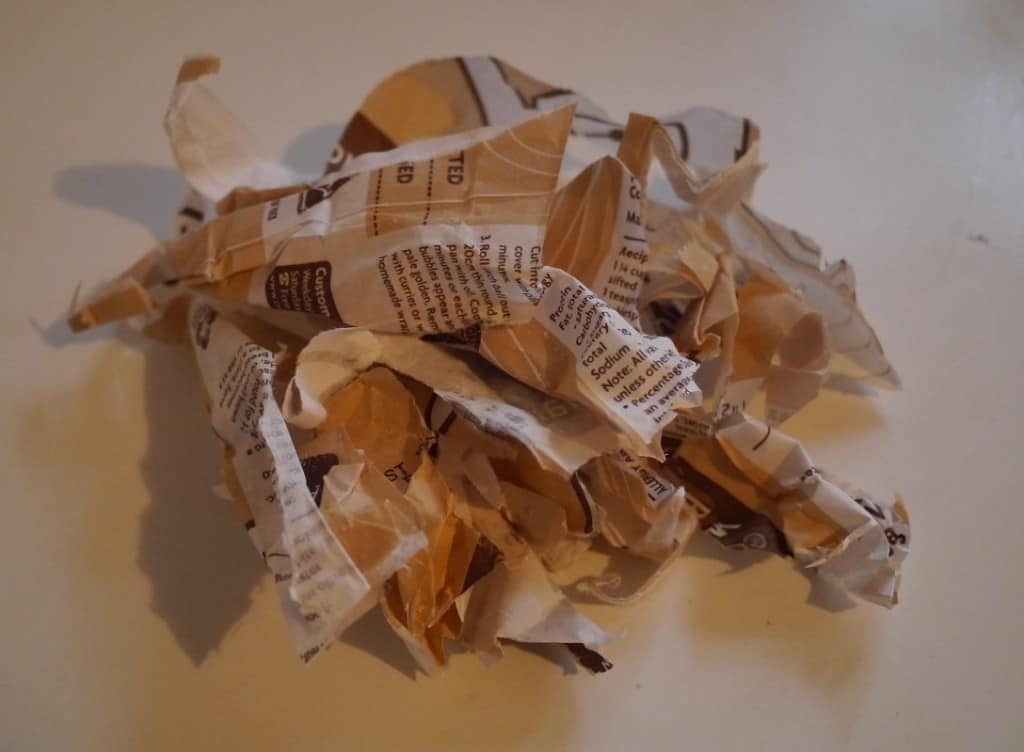 Whilst cooking, I had to send my boyfriend out for last minute ingredients. As well as the things I requested (he took some old bags to use) he also bought some milk, and some completely illegal and unrequested chocolate licorice managed to sneak its way in. Not waste, but definitely a waste of money! That white bag cost almost $4! 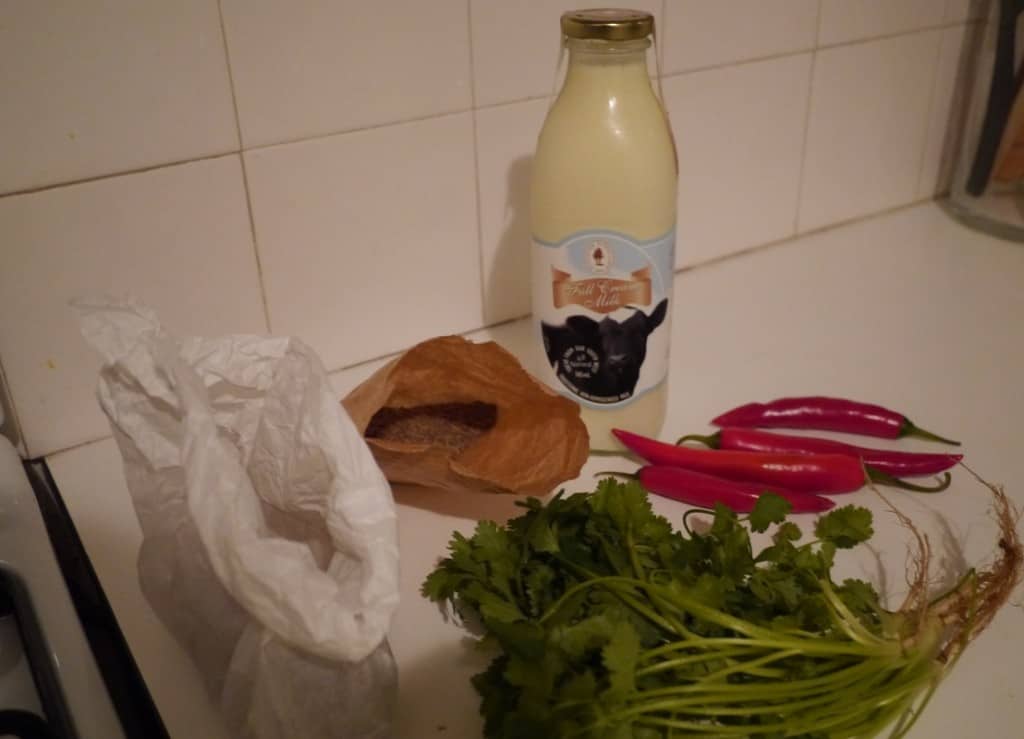 We try to buy our milk from Sunnydale, a local dairy that accept the glass bottles back for refilling. Sadly, they can’t take the lids back. Our local store used to stock this but has recently stopped. They sell a different brand of milk in glass which doesn’t operate a bottle-return policy. If it’s an emergency, we buy this one. Well, my boyfriend does. I make my own nut milk which is always plastic and waste-free!

Luckily, Sunnydale use the same glass bottles as the other dairy, so we sneakily take them back to Sunnydale for reusing. Unfortunately this other brand uses a nasty plastic sticker which we have to peel off in order to take the bottle back (Sunnydale request you keep their labels on). So once the milk is finished, we will be left with a plastic sticker and a metal lid.

I did think about asking our neighbour not to bring anything (because I was worried about the waste!) but in the end I decided not to…and he came to the door with a bottle of red wine! We rarely drink wine at home these days (Glen drinks the occasional beer and I have a really exciting waste-free beer story to share in my next post!) but it is nice to share a bottle with friends. Much better than bringing a box of individually wrapped additive-filled confectionery! 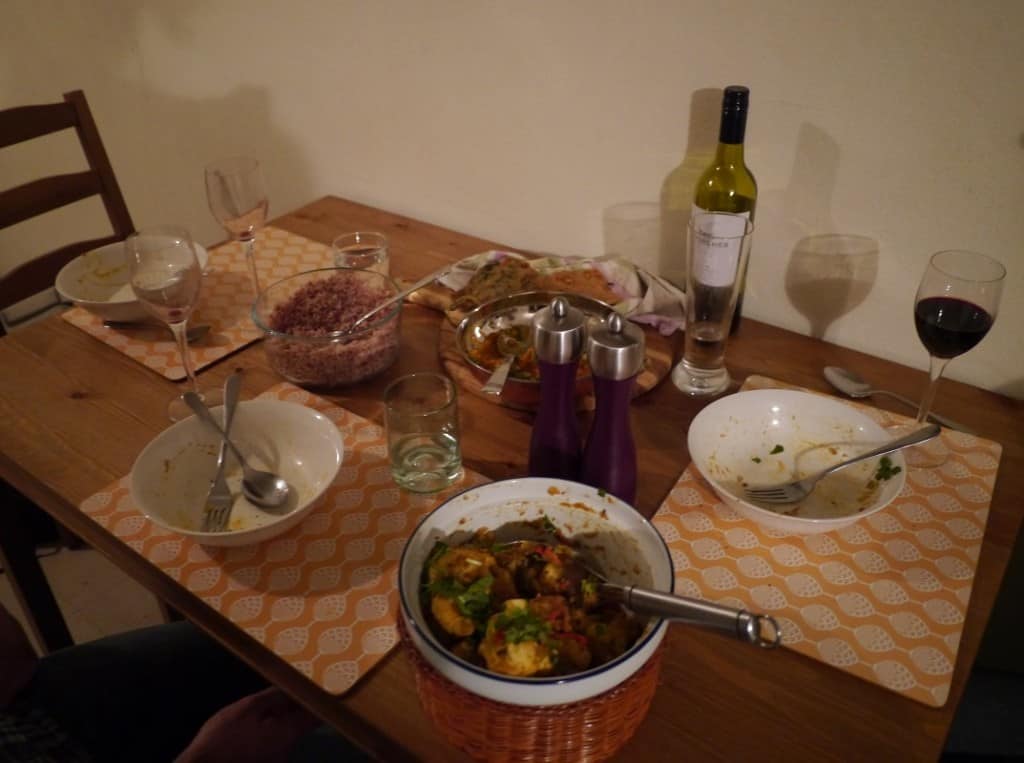 I could have demanded he take the bottle home with him to help make my Zero Waste Challenge look more successful (I bet he would have thought that was weird – as neighbours we share the same bin system!) but I decided that would be cheating. So the wine bottle and lid is our first big waste item.

As the week rolls to an end we have another challenge coming up – we have a friend coming to stay on Friday for a few weeks. (We’ve got a spare room now so we might as well make the most of it!) Not that the friend will be challenging – the challenge will be sticking to the Zero Waste Week rule with an extra (jetlagged) person in the house!

But you know me, I like a challenge, and I’m feeling confident! Looking forward to the end of the week!