With new houses comes the need for new appliances. At least, in our case it has. The last thing I wanted to do was rush out and buy a whole heap of new stuff for our new home, but we did need a new fridge and a new washing machine.

…Our old fridge (purchased in 2002 by my in-laws) was wildly inefficient. It was far too big for the two of us and guzzled energy like it was going out of fashion. Despite this, we would have (reluctantly) put it in storage for two months until our new home was ready. However, our kitchen has been designed (somewhat cunningly, with energy efficiency in mind) to only fit a smaller fridge, and our old one was far too wide. We sold it to some students in a four-person house share – a better use for a fridge this size.

…Our old washing machine (purchased second-hand via Gumtree in 2012) was life-expired. It left dirty marks on our clean laundry. The seal was covered in black slime which did not come clean no matter how much vinegar or bicarb I used, nor how many 95°C washes I ran – and a replacement was the price we paid for the machine. I’d have happily paid if it was just the seal (I’d rather repair than replace), but in addition the tubing needed replacing, the electrics didn’t work properly, it had developed a small leak and it’s possible the bearings were going (hence the dirty clothes). Our ex-neighbour is looking after it until I take it to pieces and recycle the parts – I’m particularly keen on doing something fun with the stainless steel drum.

I was keen to get second-hand appliances, but my husband wanted new and energy efficient ones. He argued our old washing machine was a good example of how second-hand doesn’t always work out. There were very few fridges of the size we need available on Gumtree. We could choose the most energy efficient options and look after them properly.

In the end, my husband won. I did feel guilty that we bought new, but choosing quality and energy efficiency means they should last a long time and use less power overall. Whether this was the best choice, only time will tell. I must confess, being able to do a load of laundry that actually comes out clean has also dissipated some guilt.

I found it very confusing that no matter how big the fridge was, the energy star rating was around 3.5 stars. Fridge sizes began at 250 litres, and went all the way up to 850 litres, and yet the stars were practically the same. How could that be?

It turns out that under the star system, fridges are compared with other fridges of a similar size. They do not compare all fridges with one another. Crazy, right? This means the star rating is fairly meaningless on its own. What is far more important when choosing a fridge (or any electronic appliance) is to look at the actual energy rating. All appliances should state their energy use in kWh (which stands for kilowatt hours) over a year.

The most energy efficient fridge we could find that was big enough for the two of us but fit the space (600mm wide) has an energy rating of 284 kWh per year. That’s 225% less energy than our previous fridge. Interestingly, it wasn’t the smallest fridge on display but one of the newest models. Most models in the size range were 300 – 350 kWh, and some were as high as 450 kWh. 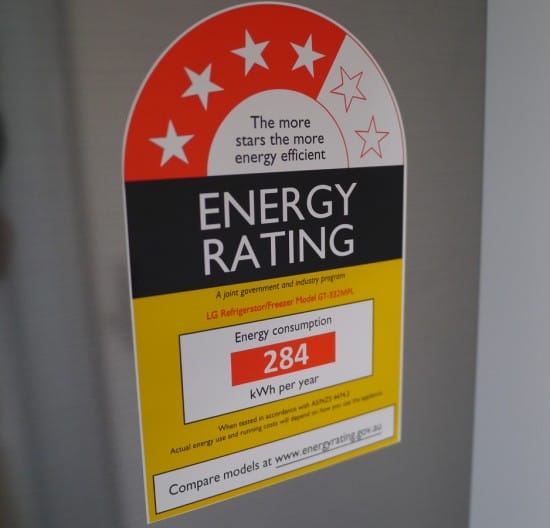 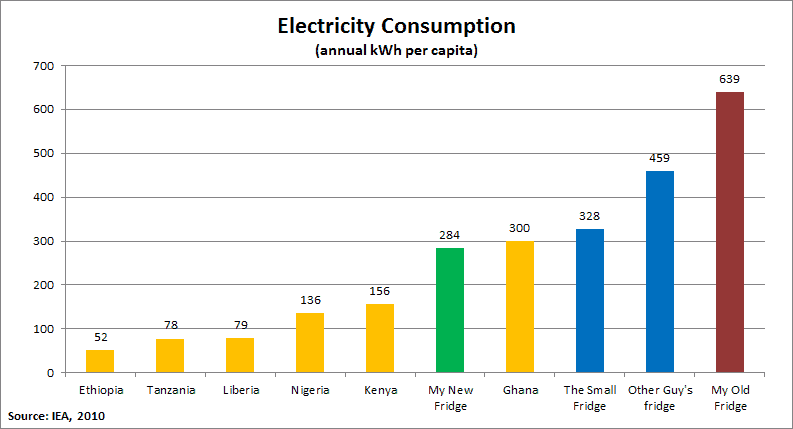 My old fridge is the red column, and my new fridge is the green column. The six yellow columns represent the total electricity consumption of an average citizen in each of 6 African nations in 2010. (The two blue columns relate to the 2014 post which I’ve linked to above.)

Washing machines have two differentials to consider: electricity use and water use. They are easier to compare than fridges because they are all relatively the same size, but rather than looking at stars, it is still better to look at the numbers.

Energy consumption is listed per year, in kWh and it makes assumptions about the frequency and type of wash that will be used. To aid comparison, all machines compare regular 40º C cycles and assume they will be used once a day. We  run our machine about 3 times a week, usually on a cold or 30ºC setting, so we would expect our energy consumption to be less than the quoted amount. If you use your washing machine every day and run hotter washes, the energy consumption would be higher.

Water consumption is quoted per wash for a regular program, not per year. 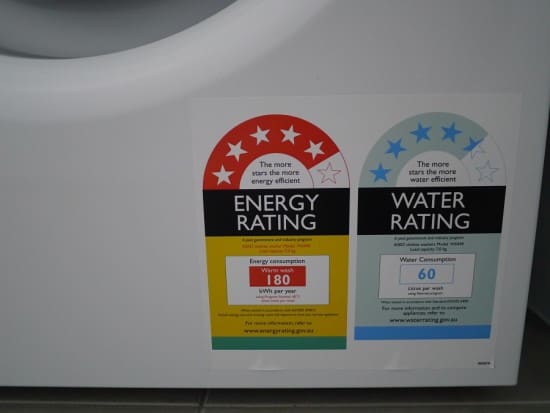 The machine we chose had high energy efficiency and low water use, but it was expensive. It was double the price of the next best performing brand. It uses 180kWh per year, and 60 litres per wash (compared to 265kWh per annum and 72 litres per wash for the cheaper brand). I confess, this was not actually the best performing machine on sale, it was second-best. The same brand had a better model that only used 50 litres per wash, but cost an extra $300 and our budget simply didn’t stretch that far.

It wasn’t just the energy and water efficiency that convinced us to switch, it was the design. Having had various issues with our previous model we were keen to choose something that would last. The brand we chose has a great reputation for long-lasting machines, and a service centre close by. It uses minimal electronics (an issue with our previous model) and it has a stainless steel rim rather than a rubber seal around the door. Rubber seals always accumulate grime and dirt, they are tricky to clean and expensive to replace (and you need to know what you are doing).

Having read the manual thoroughly (because believe me, this machine is going to be maintained well and will last a lifetime!) I discovered there is a helpful table which tells the user exactly how much energy and water each wash uses. The quick wash uses the least amount of energy and water and cleans surprisingly well. I did not realise that Wool + Hand Wash settings use so much water! 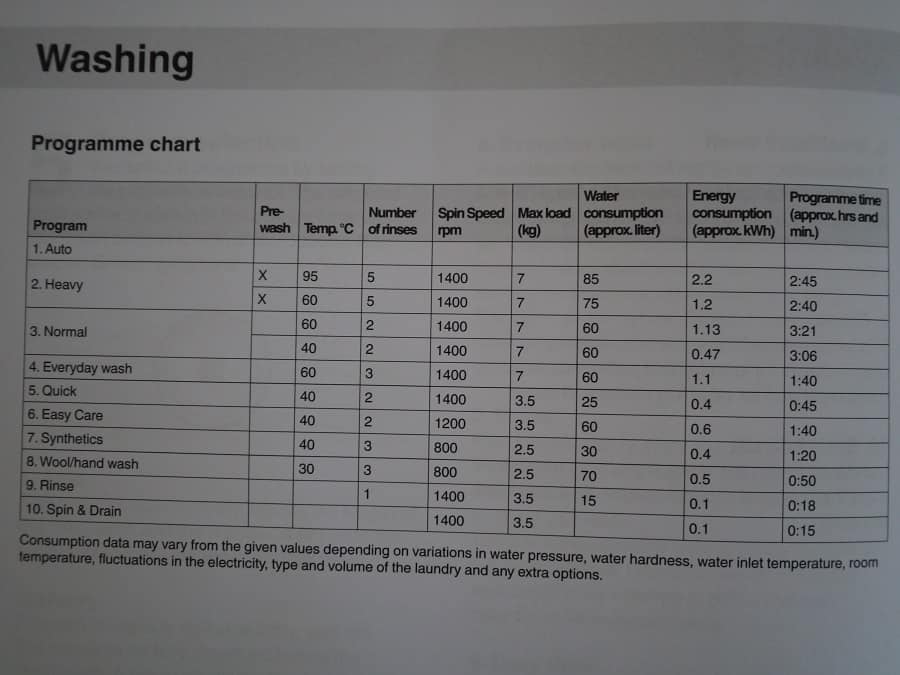 I don’t know if all washing machine instruction manuals contain this kind of information, but it is so useful that I hope they do! Some longer programs use less energy than shorter ones (which I wouldn’t have guessed) and hand washing uses far more water than I imagined too.

Choosing a Waterwise and Energy-Efficient Dishwasher

However they also use energy, and they are not particularly energy efficient. A dishwasher with a current 3.5 energy star rating will use around 0.75kWh per wash. Run it every day, and that’s around 275kWh per year. Then there’s the noise, and the biggest one of all – the energy needed to mine / refine / manufacture / transport the appliance – plus it’s another appliance to dispose of at the end of its life.

Despite my husband’s wishes, we won’t be getting a dishwasher. It’s an appliance we simply don’t need. We will be practicing mindfulness and doing the dishes. Well, I say we, but I suspect it will be me. I’m okay with that ; )

Now I’d love to hear from you! Would you have chosen new or second-hand? What factors influence your decisions? If you’re part of a more-than-one-person household, how do you find consensus with differing opinions? Have you any great experiences of buying second-hand, terrible experiences of buying new – or vice versa? Any stories or wisdom to share? What’s your record for the longest-running appliance you’ve owned or used? Please tell me your thoughts in the comments below!