I’ve decided that I need a new phone.

Need, I hear you say? Do I actually need a new phone?

My current phone is an iPhone 3GS. I purchased it as a refurbished phone in January 2010. In phone life, that’s old. iPhone have released 8 different models since they launched, and the iPhone 3GS was the 3rd one they released. Since then, they’ve updated the iPhone 5 times, each model being better than its predecessor.

Yet in real life, four years is not old, and the fact that I’m thinking about replacing it seems ridiculous!

Or so the saying goes. And whilst on a basic level my phone still functions – it can make and receive calls, the battery still works – it has some problems. It deletes my entire contacts list at least once a month. It crashes at least once a day. The software is corrupted, so I cannot update to a new operating system, nor restore the original settings.

This means that I can’t download new apps, update existing ones or generally use my phone as a smartphone. This is annoying. I realise there are more pressing problems in the world. I know there are people who would argue that a mobile phone is just for making calls, and all this smartphone stuff is unnecessary.

However, I find my smartphone useful. Not having a car, I use public transport a lot and I like being able to check my email, manage my blog and read the news via my phone. We don’t have a television, so my smartphone helps me stay in touch with what is going on in the world. If I didn’t have a smartphone, of course I’d manage. But what I find particularly frustrating is having a smartphone, but one that doesn’t really work properly. That is the worst possible combination!

What are the options if it IS broken?

I really don’t want to buy a new phone. More virgin materials, more unnecessary plastic packaging, and another step on the consumer treadmill. Having to research where the phone was manufactured, where the minerals were mined and whether the workers are fairly paid. And goodness, they’re expensive! A new unlocked sim-only phone (without a contract) costs almost as much as a computer! Then again, it is a computer. A very small one.

Second-hand isn’t a perfect solution though, particularly with mobile phones. I don’t want to buy anything stolen or damaged, and there is no security and a lot of money lost if something goes wrong. Then again, I’ve bought enough electronic items second-hand, as have many people I know, and none of us have ever been ripped off.

The bigger issue, for me, is that I want a high-tech, up-to-date mobile phone. Whatever I buy, I want it to last at least another four years! This means finding a phone that has been released fairly recently. There are plenty for sale, but they aren’t for sale because their owners have seen the light and have decided smartphones aren’t for them; instead they’re selling so they can get another new smartphone. They want to sell their iPhone so they can buy the latest Samsung, or sell their Samsung because they want the latest HTC.

Is this really any better than me buying a new phone in the first place? The consumer treadmill goes on, and I’m still contributing.

Surely there must be a better way?

Buying new – with a difference

What I want is a smartphone with social values. Wishful thinking? 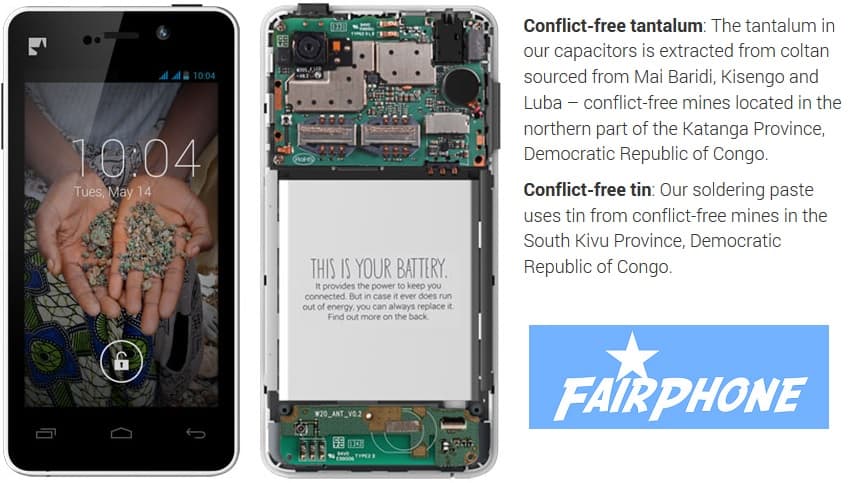 Social values, environmental responsibility and fair trade are the thinking behind Fairphone, a mobile phone with a difference. Different because they are all about opening up the supply chain, using conflict-free minerals and ensuring workers are fairly paid, and designing a phone that can be used, repaired and recycled responsibly. yes, repaired. They sell spare parts on their website, and have teamed up with iFixit to offer repair guides so people can fix their own phones. No built-in obsolescence here!

When I say “spare parts”, I’m not just talking about the battery and the headphones either!

Here’s what they believe:

Mining: We believe in conflict-free, fair resources that put people first. We’re starting with conflict-free minerals from the DRC that support families, not armed militias.

Design: We’re making phones that are built to last using open, responsible design. We want consumers to have true ownership of their phones, including how they use and configure them.

Lifecycle: We’re addressing the full lifespan of mobile phones, including use, reuse and safe recycling. We believe that our responsibility doesn’t end with sales.

The people behind Fairphone don’t think of the Fairphone as a phone, they think of it as a movement. Their vision is to start new relationships between people and their products by showing where stuff comes from and how it’s made. They want us to make informed decisions about what we buy.

Fairphone’s first phone was launched a year ago as a crowdfunding campaign with a target of selling 5,000 phones. They smashed their goal and 25,000 people pre-ordered the Fairphone.

A year later and they’ve just announced a new batch of 35,000 phones available for ordering (NB they currently only deliver within Europe). Last time round, I wasn’t quite ready to switch my dying iPhone. This time, I am. I’ve placed my order, and shipping is expected to begin in July.

The most sustainable mobile phone is always going to be the one you already have. But the Fairphone seems like a pretty good second choice.