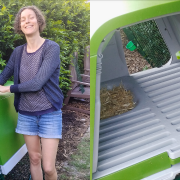 If there is one thing that’s unexpectedly brightened up my 2020, it’s chickens. Adopting chickens back in February was (probably) the best decision I made this year. These adorable, quirky little birds are just bursting with personality, and I really can’t imagine being without them.

And now I’m ready to improve my set-up and expand my flock.

Back in February I started out with 4 chickens, but Billina sadly died of old age in September. She was sick off and on for the last few months, which involved quarantining (in a converted cardboard box in my office) and then reintroducing her to the flock a number of times – and in the space of just a week she’d go from accepted member of the family to UNPRECEDENTED THREAT.

Which was all a big drama for everyone.

And she wasn’t the biggest fan of the cardboard box (as soon as she started feeling better, she let me know).

The good news is, she lived out her very last days as a happy chicken hanging out with her friends, but it got me thinking about having a better future setup for new, sick, injured or possibly even broody chickens.

(Aside from the chickens-fighting-with-other-chickens factor, it is good practice to quarantine new chickens from existing chickens to reduce the chances of passing on diseases to one another).

Long story short… I decided a chicken tractor would be a useful addition to my setup.

A chicken tractor isn’t an actual tractor, it’s a moveable chicken coop lacking a floor. They are called tractors because the chickens dig up the top layer of soil – and then they can be moved to another area with fresh grass and bugs to eat.

Chicken tractors are often a rectangular or A frame design, with a shelter/house section. They are are great for:

They can be used as temporary or permanent accommodation for chickens, depending on how often the tractor is moved, or whether the chickens are also allowed some free-ranging time and space.

Why I opted for an Omlet Eglu chicken tractor

There are a few reasons why I prefer the Omlet option over the other options.

Omlet Eglu Go UP – a review

Omlet sent me one of their Eglu Go UP chicken coops to review, and also provided me with a 10% discount code to share with you (the code is TREADING10) – which will work on their Australian, UK, Irish and USA sites.

I chose the Eglu Go UP because Perth is a hot climate, and the space under the raised house provides a nice shady spot to dust bath. Also, by raising the house off the ground, and allowing the chickens to roam underneath, the same roaming space has a smaller footprint, making better use of the space and takes up less garden.

What I love about the Omlet design though, is that if I changed my mind later on, I could simply take the house off of the frame, and place it on the ground. (I’d need to modify the run to make it compatible with the house – and close the gaps, but that’s not too hard.) I’ve thought about getting quail in the future, and the Omlet Eglu Go is ideal for quail when placed on the ground (they don’t do ladders) and with the perch tray removed.

The house comes flatpacked as a series of panels, with some metal screws included to hold it all together. No polystyrene in the box, hurrah!

(The run comes in a separate box.)

The instructions were great, really detailed and easy to follow – although I did have to check everything fifteen times, which is why it took me longer to set up than expected.

The house comes as two sides, a base, a roof, a back and a front – and some green external cladding (they also have a pink option) that insulates the coop.

Screwing it together was relatively straightforward.

Once the house is screwed together (but before the outer green cladding goes on) the stand needs assembling – the frame that the house sits on.

There is also the option to add wheels to this frame, to make the coop easier to move around the garden. You hold the opposite end and maneuver the coop into the position you want. If you’re intending to keep the coop in the same place, you probably don’t need the wheels. You can also lift the coop with two people as an alternative.

Once the frame is assembled and the wheels attached, the house sits on top and is held in place by two sturdy metal holding plates. The green cladding clips in place, and the house is done.

Wondering how the chickens get into their house? With a ladder, of course!

Next, assembling the run.

No tools at all required for this bit.

The run is made up of a series of welded mesh steel panels that securely attached to the coop. There’s also a mesh ‘skirt’ that can go around the edge to help deter predators (I haven’t used the skirt as I’m fortunate enough to live in an area without foxes).

The mesh panels clip together with plastic clips. That might not sound super secure and it’s a little wobbly whilst it’s being put together, but once it’s all in place it’s pretty sturdy.

The clips can be opened and closed to allow for the run to be dismantled. Being plastic, I am sure the bending of the joint will slowly weaken over time, and also degrade in (Australian) sunlight. A follower on Instagram told me that after 4 years in the Queensland sun her Omlet coop clips have started to break. Replacement clips are available, or you could use wire, string, or something else to secure it all in place.

It’s helpful to have two people to assemble this – one to hold the pieces in place whilst the other clips them together.

The coop can be purchased by itself, or with a 2m run, and any number of 1m extensions can be added. I added a single extension to make my run 3m. The longer it is, the more awkward it would be to manuevre the coop/run around the garden, but 3m is fine.

A quick tour of the Omlet Eglu Go UP chicken coop

The door to the chicken coop can be swung open and shut with a liftable and turnable knob placed in the roof.

The side panels have vents, so closing the door does not affect air flow, but it helps keep the chickens secure – a great feature if predators such as foxes or snakes are a concern.

At the back of the chicken house there is a removable panel which can be taken off by turning the big knob at the back, and this gives access to the coop.

The internal tray is removable and slides out, and is made of two parts (the top one is grey, and the bottom on is green). On the top part there is a nesting box area, set slightly lower than the rungs, and then the rungs. (Chickens prefer to perch on flat or wide beams, so these work well.)

There are gaps between the rungs so their poop drops into the bottom tray. The two trays separate easily, and the whole thing can be hosed down to clean.

Honestly, cleaning this coop is a dream.

And of course, to test it out… I have two new chickens.

These two have come from friends who are travelling around Australia for a year. The orange feathered chicken – a solid Isa brown called Dorothy – was too busy eating to pose for pictures. The grey chicken, Betty, is the sister of Alison, my existing Araucana chicken.

Final thoughts on the Omlet Eglu Go UP

I’m really impressed with this mobile chicken coop. It’s well designed, sturdy and secure. The coop is completely weatherproof, and easy to clean. (I can’t stress enough how easy to clean it is.) And whilst I expect some colour fading in the sun, it’s robust and made to last (the house is UV stabilised, and the run is metal), and a zero maintenance option.

If you have zero or minimal DIY skills, it is a great no fuss option.

I love the fact that it’s adaptable (by placing on the ground and removing the perch tray, it becomes suitable for quail or rabbits) and modular, and that the company sells spare parts.

There’s also a thriving second-hand market for these items so if you no longer need it down the track, it’s easy to find a new owner. (That said, it’s less easy to find Omlet products second-hand, as they get snapped up quickly and are often priced similarly to new products.)

You’ll find more information about the Eglu Go UP (and all the other pet products that Omlet make) on their official websites (and don’t forget, if you choose to make a purchase you can save 10% with the code TREADING10)

And of course, if you have any questions about the Omlet chicken coop – or if you wish to share your own experiences – I’d love to hear from you so please get in touch and leave a comment below!