Saturday was the start of Bike Week, an event that is held every year in WA to celebrate bicycle riding and to promote cycling as a method for transport. The events that are run over the course of the week are always really creative, and have appeal for a wide range of people whether regular cyclists or not, so it’s really hard not to get involved in one way or another.

This weekend I spent a fair amount of time engaged with Bike Week activities, and I wanted to tell you about not one, but two events that I found really inspiring.

Movies screenings…with a difference! On Saturday night I went to a community movie screening of BMX Bandits (a 1980s film starring a very young Nicole Kidman), and the whole thing was powered by bicycles!

The setup is a collection of fifteen exercise bikes (the really old ones with a bicycle chain) and 15 Fisher and Pykel washing machine motors, which a local Physicist has engineered into a setup that can power a movie projector! The project has taken him 15 years, as every single piece has been picked up from verge collections and scrap.

Fifteen people pedal the bikes, which power the movie. The cyclists can enjoy the movie too of course, and if at any stage they get tired, bored or saddle-sore, they simply raise their hand and someone else from the audience steps up to take their place. 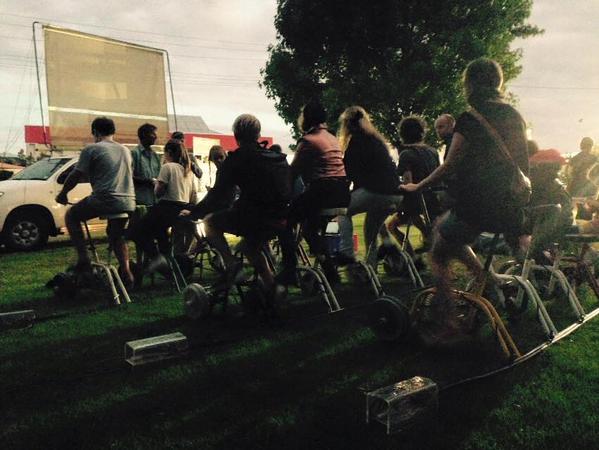 And they’re off! Pedal Powered movie gets underway as the sun sets in Victoria Park.

It was so much fun! The bikes were never unmanned as the second that someone put their hand up to have a rest, multiple people sprang up to take their place. The kids in particular loved it, and would often get off the bikes having had enough to jump straight onto the next available one less than a minute later!

The Giro d Perth is described as a “back lane bike odyssey” and is a cycling event held in Perth every year as part of Bike Week. You pay a registration free to take part, but it’s not a race, or even a ride in the traditional sense: it’s part cycling adventure part treasure hunt (with quiz questions and answers rather than treasure to find). The organisers describe it like this:

The Giro d Perth – What it’s About

Riders don’t even start at the same time; registration opens at 8am and you can set off any time between then and 10am. Plus yes, as it suggests above, you can stop along the way for breakfast – and many people do! 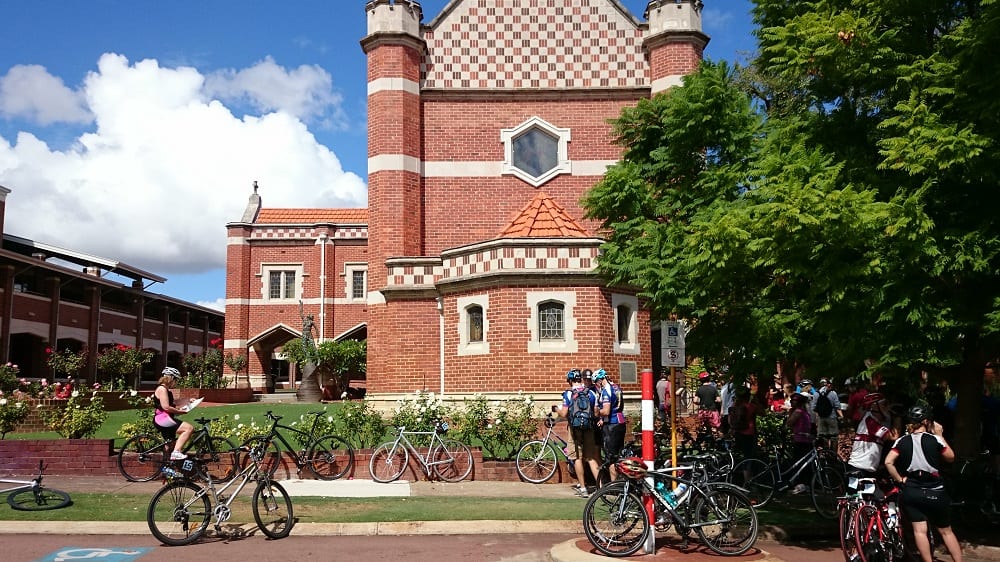 Stopping off en-route to answer a quiz question. 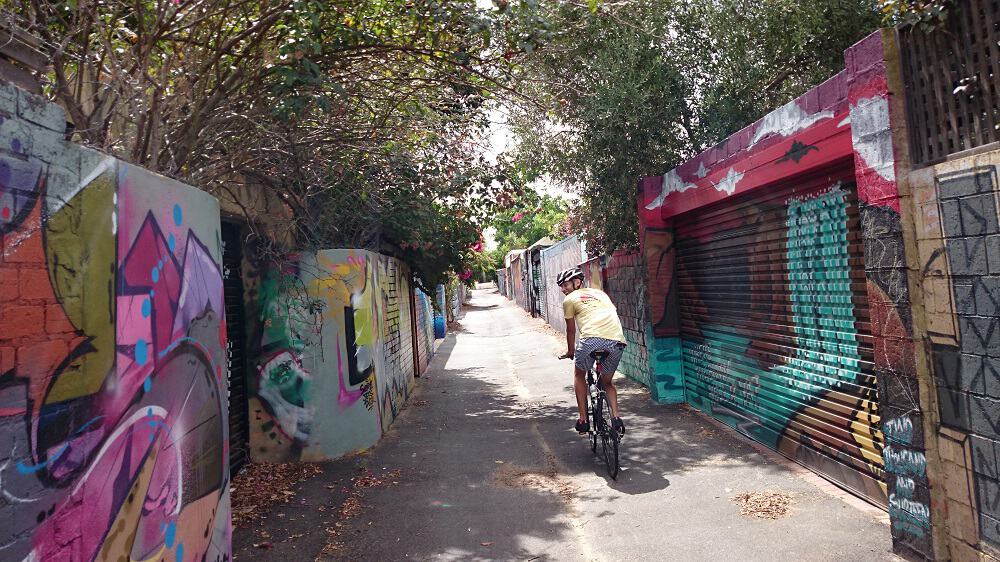 The Giro d Perth takes riders through interesting backstreets and laneways around the city.

The great thing about the Giro d Perth is that it gets people out on bicycles onto roads. There’s a safety in numbers with so many cyclists along the route (and I’m sure some of the car drivers were very surprised to see so many wobbly, amateur cyclists taking over the roads on Sunday!), and its a really fun and sociable way to spend a morning.

If you made it to the Italian Club by 12noon (and there was no finish time, so it didn’t matter if you didn’t) there was a presentation by the founder. There were prizes, not for fastest team or most correct quiz answers, but instead for best decorated bike, best vintage bike and a couple of other categories.

He made a really good point: the “lycra brigade” are always going to cycle. This event isn’t solely for them (although they are welcome to join in – and they did). This event is about getting those people who don’t ride often, who don’t have fancy bikes, who maybe aren’t so confident, out on the roads and showing them that cycling is for everyone.

I was also impressed that there was minimal waste at the event. Your registration fee gets you a number, a map and a pen, but there’s no token throwaway medals or branded T-shirts, no fridge magnets or other unnecessary paraphernalia included. At the end, there was no giveaway of plastic cups or drinks bottles (most cyclists have them already, after all) – instead there was a big water tank so riders could refill bottles they already had. Perfect! 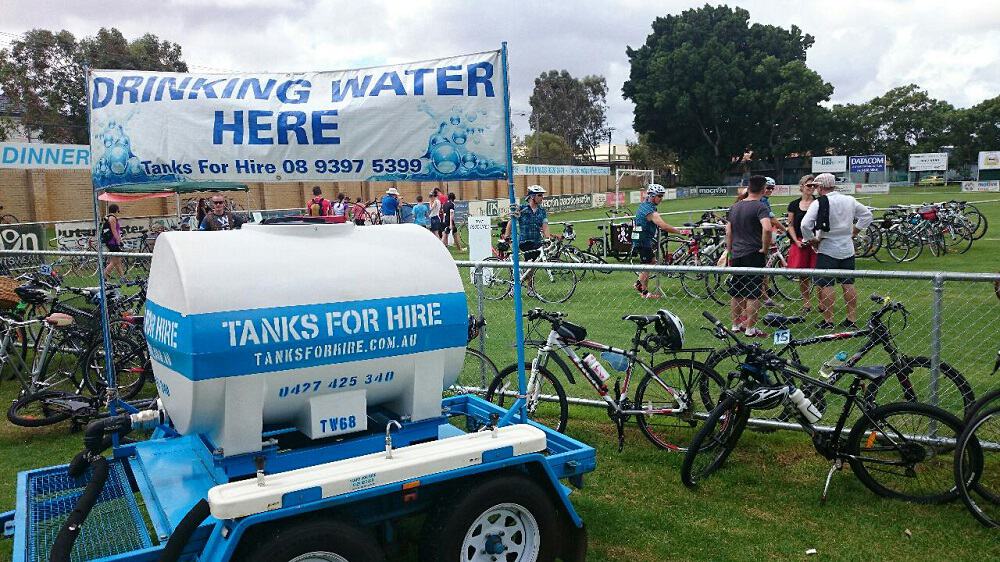 No single-use disposable plastic bottles handed out at the finish line! Instead they had a water refill station – such a great idea!

Both events were so much fun! A great way to spend time with family and friends, get out into the fresh air, get some exercise, and celebrate the enjoyment that bicycles provide. A weekend well spent : )

Now I’d like to hear from you! Have you ever taken part in any interesting or unusual cycle events? Have you ever seen any crazy bicycle events but not been game to take part? Are you a regular cyclist, and if not, what holds you back? Do you find the “lycra set” intimidating, or are you happy to cycle on the roads with your less-than-polished ride? The comments make the conversation come to life, so please let me know your thoughts by writing below!