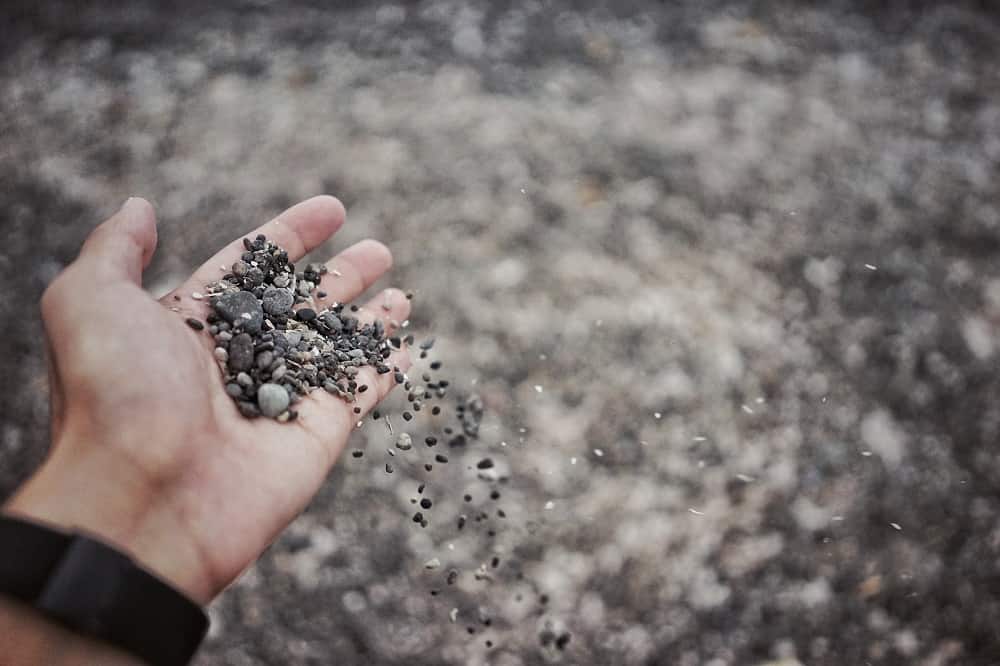 I’ve received a few emails recently asking whether I think zero waste is a lifestyle for the privileged. After all, it is predominantly represented in the media by white, seemingly middle-class females. Is zero waste really a lifestyle for everybody? Or just the more affluent few, or those with more time on their hands to spend traipsing to the various trendy organic stores and making DIY skincare products from scratch?

I wanted to explore this further by answering four questions: what is privilege; what is zero waste; is zero waste a lifestyle for the privileged; and ultimately, does it matter?

A good definition of privilege is this: “a special right, advantage, or immunity granted or available only to a particular person or group”. These “privileges” are often unearned, for example, being born into a particular country or family. Actually, privilege is a lot more complex than simply calling it an “advantage”. Often it’s multiple advantages, based on all kinds of factors.

This short video (less than 2 minutes) does a great job of explaining privilege, and this video below (which is 4 minutes) demonstrates how different people are affected by privilege in society.

In many ways, privilege is an advantage that manifests itself as choice. The more privilege, the more choice.

Having privilege doesn’t make anyone a bad person. It doesn’t mean not having to work hard, or struggle to achieve a goal. It just means having advantages that make these things easier than for someone else without that privilege.

What is Zero Waste?

I think it is important here to explain both “zero waste”, and also “zero waste as represented by the media”, because they are not the same.

Zero waste is about consuming less, making conscious choices when we do need to make purchases, supporting companies who are trying to do the right thing and reducing our environmental impact. It’s about choosing second-hand, borrowing or making do, choosing things that will last and taking responsibility for our personal choices.

Of course, the media represent zero waste in a slightly different way. Zero waste in the media is the newsworthy bits, the glamorous bits, the bits that invite intrigue and discussion. The media love to talk about and show photographs of glass jars of annual trash, trendy bulk stores and Farmers Markets.

Some of the most popular zero wasters are glamorous Americans who are also extremely photogenic and live in beautiful houses and apartments, and their lifestyles lend themselves to media coverage.

But this is just a snapshot. Even glamorous zero wasters shop at second-hand stores, and compost their food scraps, yet this isn’t talked about nearly as much. Or they choose to buy nothing at all – but where is the photo opportunity there?

Is Zero Waste a Lifestyle for the Privileged?

I would say no. But also yes.

Whilst any “lifestyle” is a choice, and therefore infers some level of privilege, the zero waste lifestyle is the lifestyle of consuming less, of refusing the unnecessary. Of borrowing, and choosing second-hand. These choices are accessible to most.

So no, the zero waste lifestyle is not reserved only for the young, affluent, or those with plenty of time on their hands.

The media might represent the zero waste movement as white, female and middle-class, but scratch beneath this veneer and you will find that zero waste is embraced by men and women, young and old, from all of the continents.

The glass jar full of trash might be the emblem of the movement, but to me, the zero waste lifestyle is a philosophy and a set of principles rather than a destination.

How far and how quickly we can progress towards these ideals, in practical terms; I do think that is a matter of privilege.

Having a choice – about where we live, where we shop, what we buy and how we spend our money – that is a privilege.

I don’t have children. I don’t have elderly or sick relatives that I need to look after. I don’t have any disabilities, serious health complaints or allergies. I live in a city with plenty of options. I can do a big bulk grocery shop once a month because my budget allows me to, rather than having to go every week. Because the bulk store is very close to my house, I can also pop over there if I’ve forgotten a couple of things.

These factors make it easier for me to reduce my waste, and that is privilege.

Access to bulk stores and Farmers Markets, the choice of grocery store, being able to afford things like stainless steel lunchboxes or organic oats, these choices are not available to everyone.

For those of us who do have access to these things, we are privileged.

Of course, zero waste is not about stainless steel lunchboxes or organic oats. It’s about working towards reducing waste, consuming less and choosing better. Privilege makes it easier, for sure. The less privilege and the less choice, the harder we have to work for our desired results and vice versa.

Zero waste is no different from any other scenario.

I don’t want to talk about whether privilege matters. Rather, I’m interested in why, when it comes to living zero waste, privilege is talked about at all, and more so, why it is seen as a bad thing.

Privilege exists everywhere, that’s just a fact. Yes, privilege tends to mean more resources and more choice. Like many things, zero waste is easier for some than others.

But that shouldn’t stop us doing what we can. Every step is a step in the right direction, and small changes still add up to create a big impact.

Whenever I see negative press or comments about zero waste in the media, the discontent tends to be around privilege; perceived and actual. It is perceived that zero wasters are well off, and therefore the lifestyle is not attainable to most.

As someone who owns both a stainless steel lunchbox and a reusable coffee cup, I realise this. The most sustainable and zero waste choice would be for me to not drink coffee at all, and drink only water. But I enjoy an occasional coffee, and so I have a reusable coffee cup.

That doesn’t mean these things are necessities of the zero waste lifestyle.

The “stuff” gets talked about so much because it is a talking point! But talking about the “stuff” can detract from the real message.

Zero waste is the lifestyle of refusing, rethinking, reducing, reusing and repairing. Of using what we have, and making do.

Secondly, I’m at a loss as to why anyone would think it is a bad thing that those with privilege are choosing to live zero waste, use less resources and tread more lightly on the planet. There are plenty of people with privilege exploiting the planet, using more than their fair share of resources, and encouraging consumption.

Why attack or dismiss those using their privilege trying to make the world a better place?

Anyone working towards reducing their impact and sharing what they’ve learned should be applauded, in my view.

I am very aware that I am white, female, middle-class, and living in Australia. The stories that I share are written from this perspective: my lived experience. Most zero waste advocates share their own experiences and lifestyle choices. It’s fact-sharing rather than prescribing a lifestyle for others. We do what we can, and we share what we know.

Waste is something we all make decisions about, every single day. We all have the potential to create waste, and the opportunity to avoid it. Reducing waste is accessible to most.

But if zero waste is only talked about (or represented in the media) by one group of people, with one set of experiences, how can we expect everyone to embrace this way of living?

How can we expect those not in this group to relate, or to connect, or to feel inspired?

Whilst the zero waste movement is represented as white, female and middle-class, there will always be people who feel excluded.

I don’t have the answers, but I do know that if we want the zero waste movement to spread, we need to be supportive, inclusive, and encourage all voices, even those that are different to our own.

We need to recognize that people have different experiences and different journeys.

We need to recognize that we cannot and do not speak for everyone.

Where we have privilege, we need to be aware of it. Not deny that it exists, but recognise that it is there.

Privilege isn’t a bad thing in itself. It’s how we use it that counts. 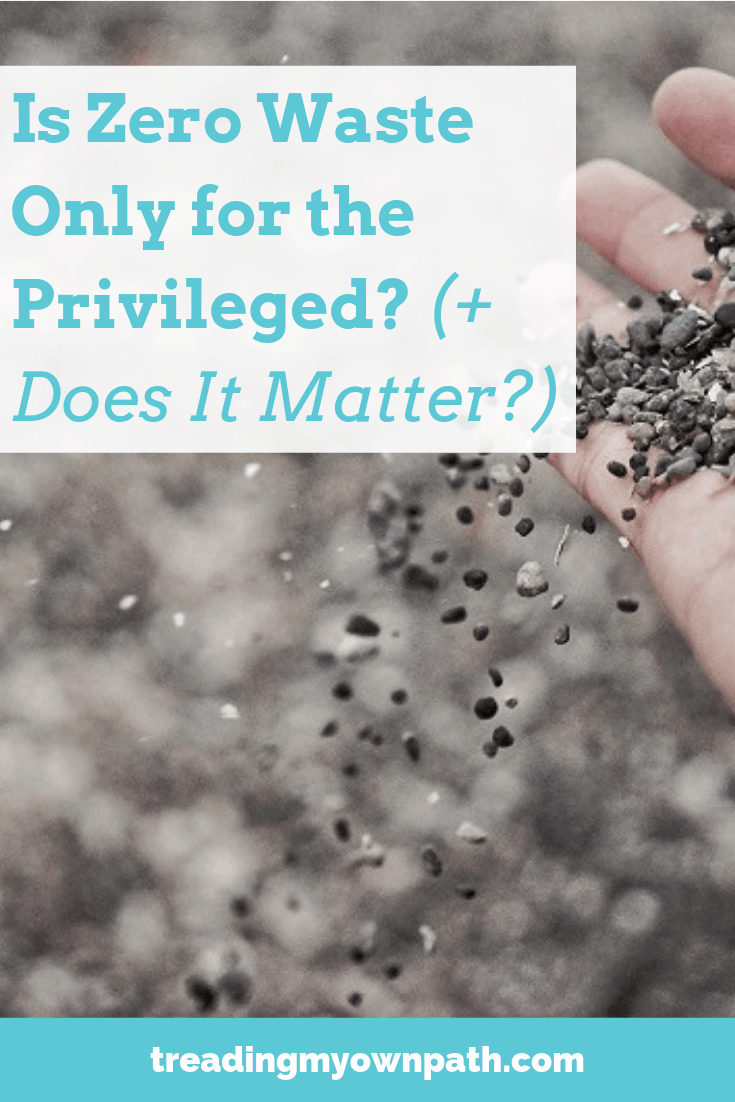