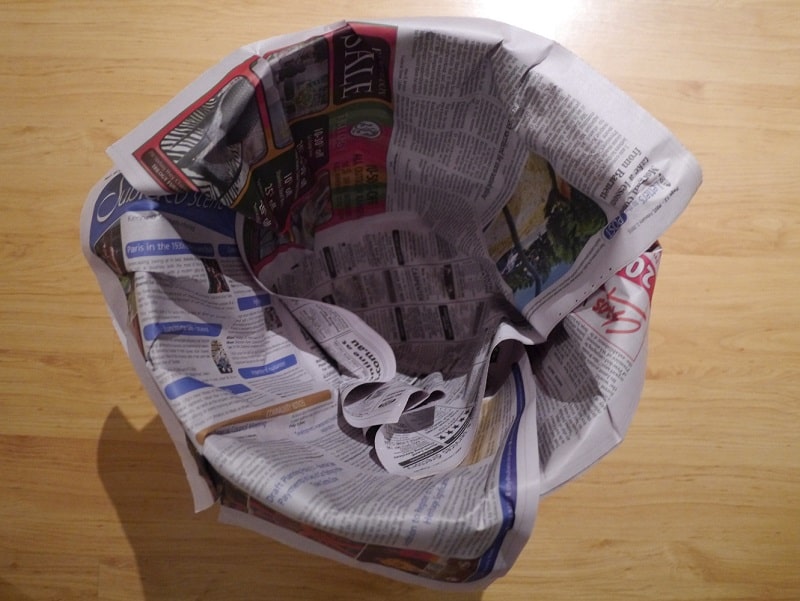 I have declared this week Zero Waste Week, and I am attempting to generate no waste at home. This means NO landfill rubbish and NO recycling (in case you’re wondering why no recycling, I wrote this post explaining why recycling isn’t the green solution we’re led to believe).

So at the weekend I dusted off the bokashi bin that was donated to me by a friend rather more months ago than I’d like to admit, on the condition that I blogged about it. Better late than never! Most of my food scraps go to my worm farm, but lemon peel, onion skins, eggshells and other bulky fruit and veg waste usually go in the bin (the worm farm is pretty small) – and I lament not being able to compost. 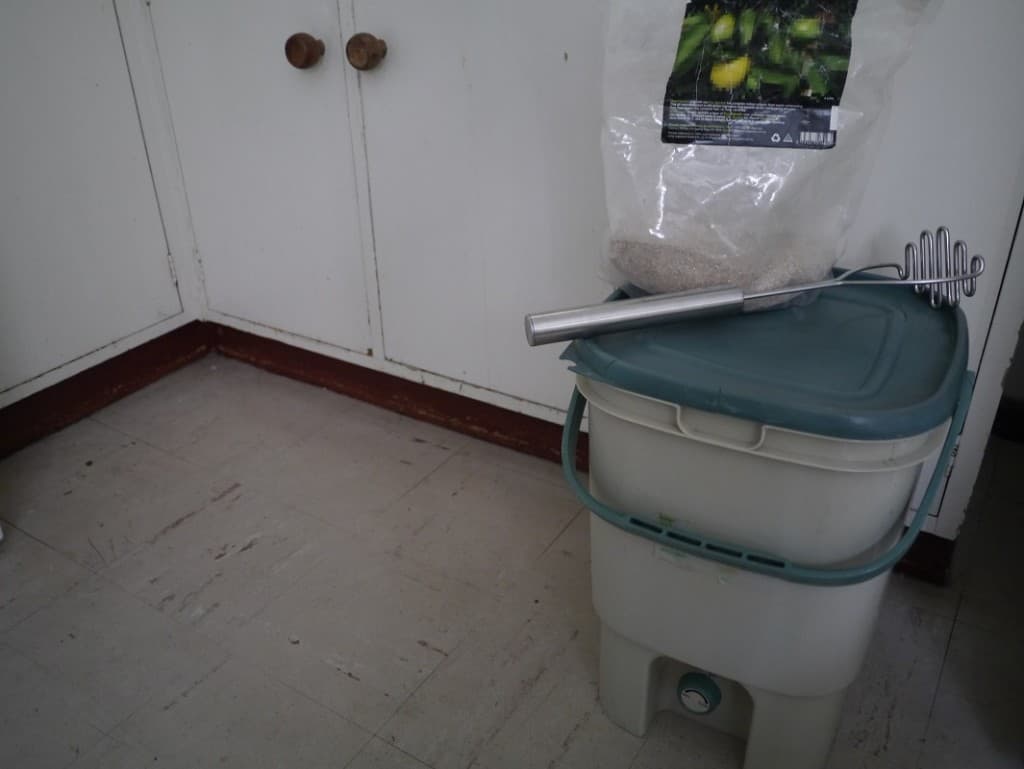 Bokashi bin installed in the kitchen. The donated bokashi mix comes in plastic – if this is something I want to keep up with, I’m going to have to learn how to make my own!

Not any more! Or at least, not this week. I’m going to give the bokashi bin a go (I will write a blog about it once I’ve used it for a while and can offer some wisdom!) and see how that works out for me.

So here is my bin system emptied and ready to go on Monday morning: 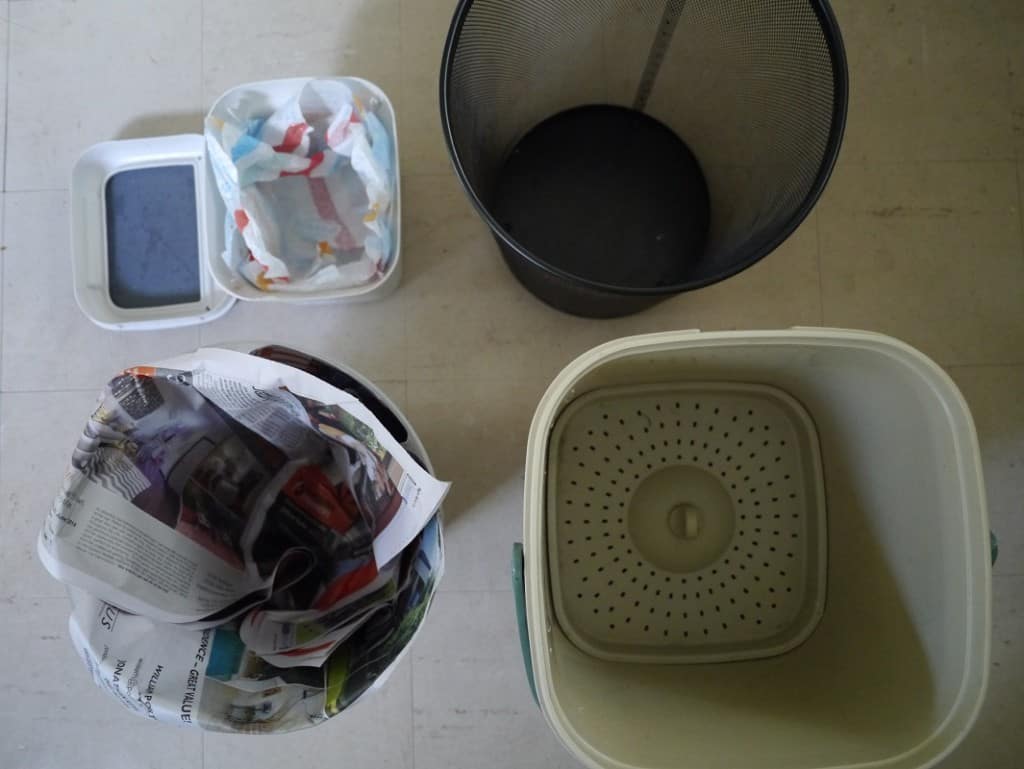 The black metal bin is for recycling. The paper-lined bin is for food waste – I lined it out of habit. We use the community newspaper to line once it’s been read. If it doesn’t need changing, then it doesn’t count as waste! The small caddy is scraps for the worm farm, and lined with Who Gives A Crap? toilet paper wrappers (read about that here). The bokashi bin is the shiny new addition to the line-up.

I thought it might be useful to give you some context as we start the week, so here is a picture of my fridge: 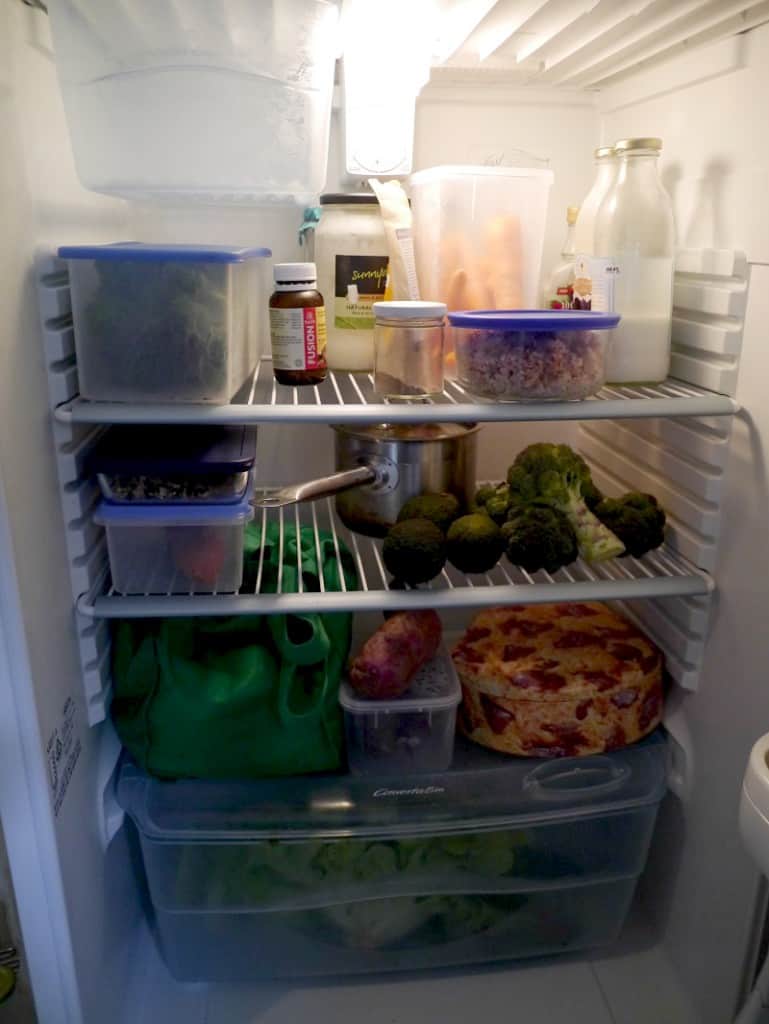 Our vegetable box was delivered last Thursday (we currently get one large box a fortnight) so there’s still some fruit and left. The saucepan contains soup, the tin contains a cake and the glass Pyrex containers hold leftovers. The milk bottles actually contain cashew milk which I made on Monday morning (the recipe is here).

Note: yes, some of my veggies are in plastic containers! Slowly but surely I’m replacing them with glass and stainless steel, but sometimes I still have to use the plastic ones. I never use them for leftovers, only raw veg that will be washed, peeled and cooked.

I can’t really take a picture of our pantry as we no longer have one since the move! At some point we will get something, but for now half of my jars are living in a storage crate, which doesn’t make for good photos.

The pantry did need some restocking though, so yesterday morning I headed to Fremantle. Before shopping I met a friend for coffee (dine-in of course!); fortunately the shop only print receipts on request so I was still waste free.

I headed to a different shop to pick up some things – using my own bags. They didn’t print receipts unless requested either. I reused paper bags that I brought from home: I’m reusing until they disintegrate/get stained/turn gross, and then they will go to the worm farm.

Once home, these get stored in glass jars…except the brazil nuts and coconut, which got turned into cake. 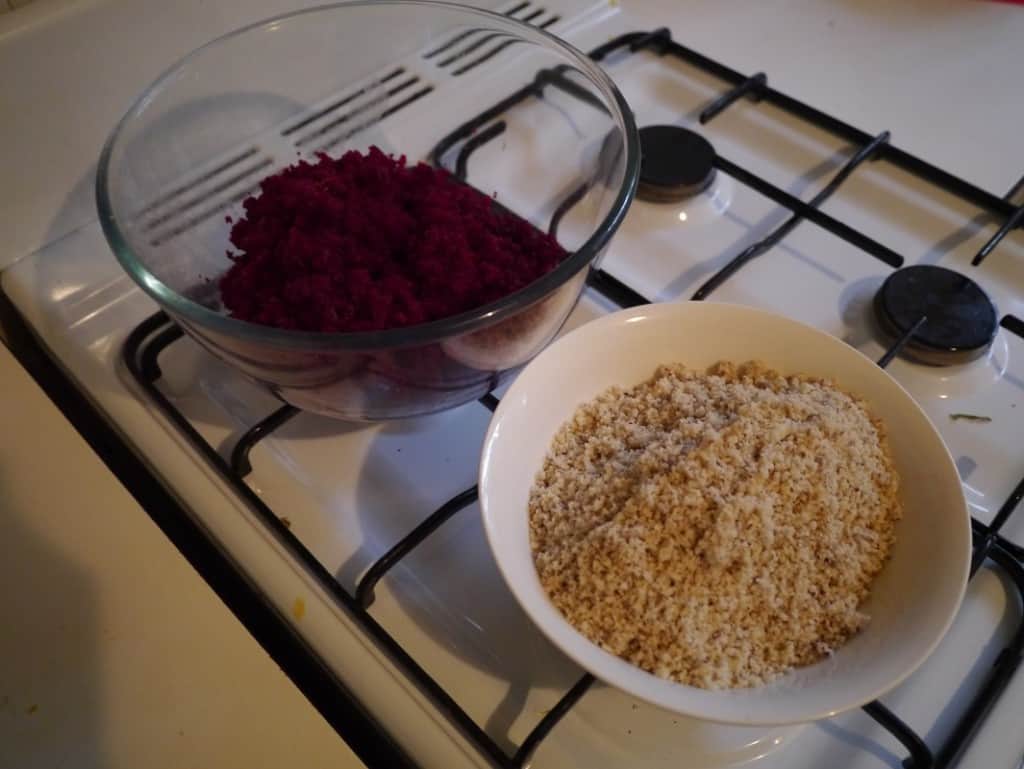 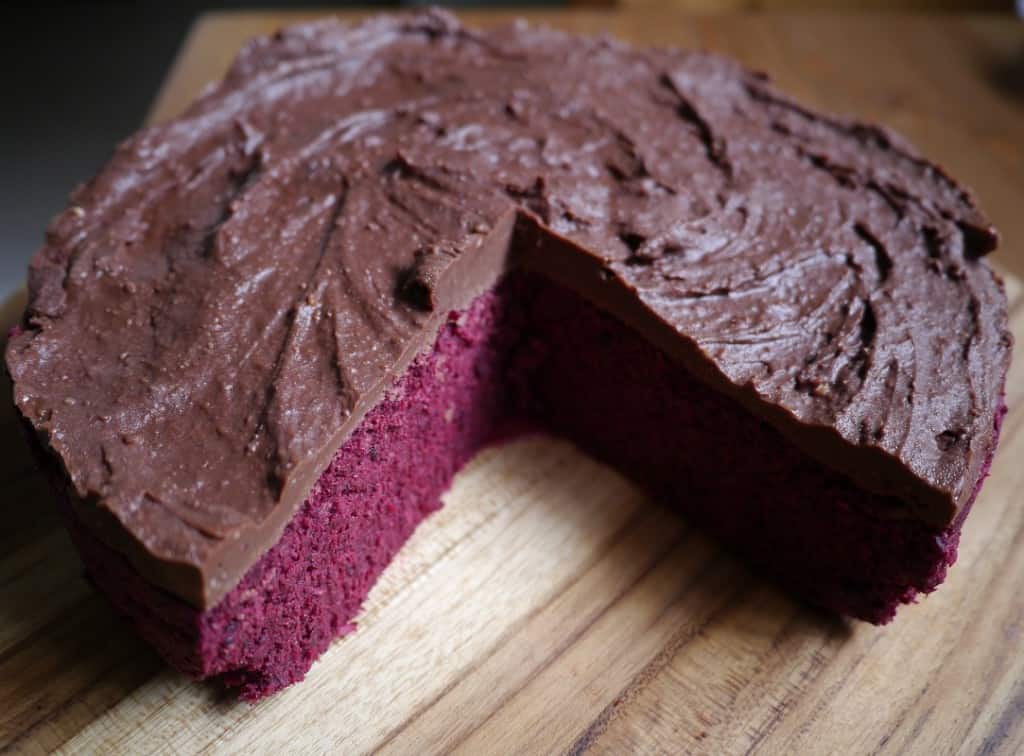 I used greaseproof paper to line the tin (I don’t always, but for this cake it’s necessary). I tend to clean my paper and reuse it if I can (as much because I’m too lazy to cut new circle shapes every time); usually I only get a couple of uses and this was the second go. If I can’t salvage the paper, it will go to the worms. 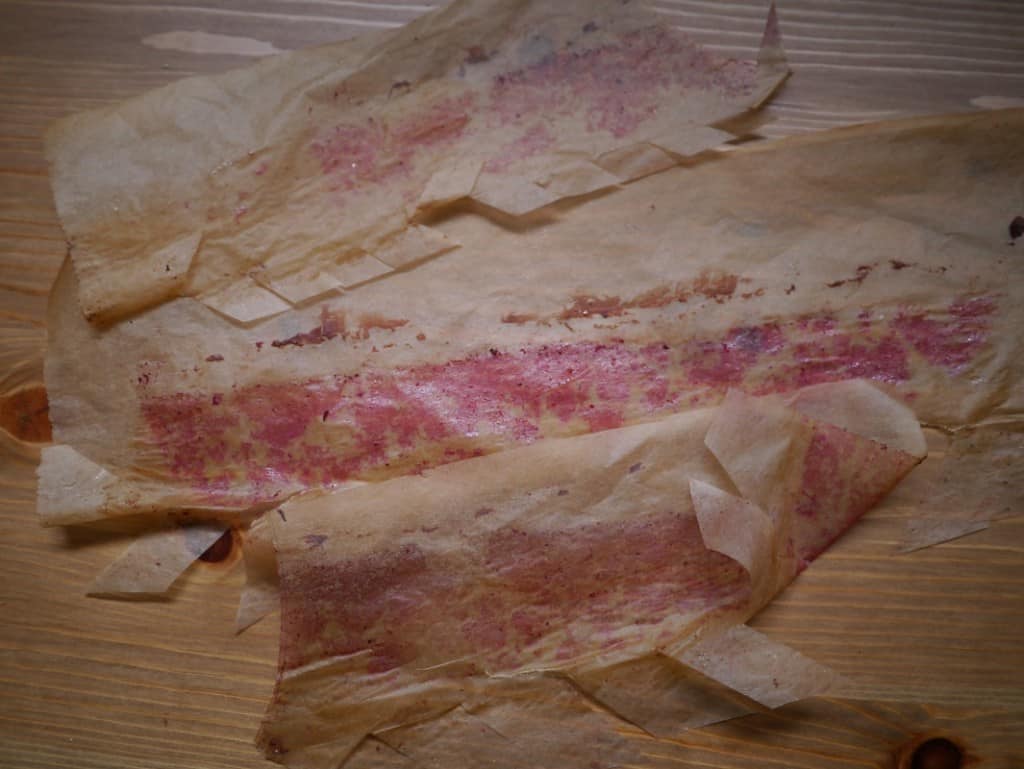 I needed to go to the Post Office to send two parcels, and for this I received a receipt. My dilemma is this: it’s a thermal till receipt (you can tell because it’s slightly shiny and sort-of slippery) and thermal till receipts are coated with BPA. I’ve talked about why BPA is bad before, and it’s often recommended that we don’t recycle thermal till paper as it ends up as toilet paper, food packaging or even napkins, and these become contaminated with BPA.

Some people argue that because it is such a small amount it doesn’t contaminate the waste stream significantly. I have to confess, I currently recycle my receipts. But put them in the worm farm? Hmhm…I’m not sure I want to do that. So whether it goes to landfill or to recycling, it’s still in the waste pile.

I think I need to get into the habit of refusing receipts, and leaving them in the shop! 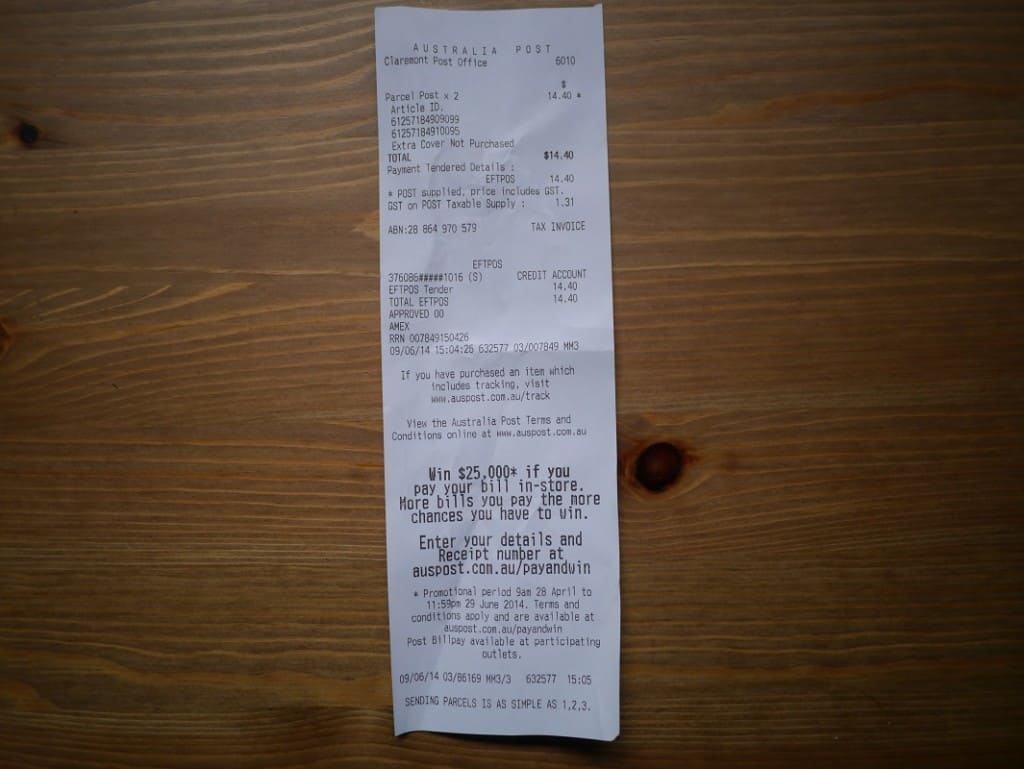 What I’ve learned so far…

So far so good! I’m midway through Tuesday and nothing has gone disasterously wrong yet…but will it continue to go swimmingly as the week progresses?