I’m moving home in just over a week, and there’s nothing like a house move to flex that decluttering muscle and have a clear-out. All that stuff piled away in the corners of the flat that we’ve probably forgotten about?

It’s one thing to let it sit there, not bothering us; but it’s quite another to have to drag it out, dust them off, pack it into boxes, lug them somewhere else, unpack them at the other end and then find somewhere new to stash it all until they’re forgotten about once more.

As a natural hoarder, one of the hardest things for me to do is to let go of things that might be useful in the future. Which basically means, stuff that I don’t need now. Or probably more accurately, stuff I don’t need.

I can get rid of things that aren’t useful at all and I know won’t be useful in the future. I try to avoid getting these types of things in the first place, but it happens.

I can also get rid of things that are useful, but that I have no use for – especially if I know someone else who will be able to use it, or I know that we could sell it (so there’s a financial sweetener to counter the pain of getting rid of it).

However, things that might be useful in the future translates as things that are broken and need repairing. Cables for some kind of electronic device but which one exactly I’m not sure. Stuff for hobbies that I don’t even do but think I might try in the future. Half-used toiletries or jars of strange ingredients that I don’t really like but know I paid money for and can’t bring myself to throw away.

When we move, I’m going to have to challenge my resistance to getting rid of things that might be useful in the future. We’ve lived in this flat for almost two and a half years. If something hasn’t been useful in all that time, and I still can’t actually envisage when it will start becoming useful, then it needs to go.

Sounds easy enough, but will I be able to follow through? To help strengthen my resolve, I’ve been thinking about what I tell myself in order to convince myself to hang onto these things. If I can counter these arguments in a logical way, maybe I’ll be able to let these things go.

Here are the three top excuses, and my counter-arguments.

But I feel so guilty!

Most of this stuff is stuff that no-one else will want. Broken bits and pieces, scrap, textbooks, centuries-old cosmetics, random condiments that I wouldn’t trust to eat, unused kitchen tools… and so on. Why then, do I feel so guilty about throwing it away?

One reason, maybe, is that I paid for some of this stuff. It cost me money. To throw it away is to admit that I made a bad purchase. I like to think of myself as good at managing money, but these items make me feel like I was reckless – a spendthrift! I feel guilty. The paradox is that every time I see these items, I am reminded of my bad purchase.

If I got rid of these things, I wouldn’t think about them again, and I’d actually be free of these emotions!

Another reason is that these things may have some functionality left, but I don’t want to use them any more. This is the case with toiletries that I have since discovered contain toxic ingredients, or plastic cookware, or foodstuffs that I don’t like. Yet to get rid of something that still has some life left seems wasteful, so they remain, just in case. Yet if I don’t want to use them (and I don’t want anyone else to use them, either), then actually they don’t have any life left. It’s an illusion.

The guilt I have, I’ve realised, is misplaced. When I got these items, and started using them, I didn’t know they were toxic/unsafe/unpleasant. If I had, I’d never have bought them, or never have used them. We make decisions based on what we know at the time. I can’t feel guilty about what I didn’t know.

I’m saving it from landfill

If it’s something that I’m genuinely going to use, then yes, I’ve saved it from landfill. If it’s something that just sits in my house, gathering dust, then I haven’t actually saved it from landfill at all. I’ve just delayed the process. It’s still as useless as it was, and it will end up in landfill eventually (if not by my hand, by someone else’s).

Maybe in the future I will have a garden and need these things. But that’s a maybe. (Actually, I don’t know that old carpets are good to use in gardens anyway, because of the chemicals that leach out of them.)

This wasn’t my waste, it was someone else’s. It’s waste that I tried to save. I failed. But we all fail sometimes. That’s how life works.

What if I do need it later?

You know what? If it so happens that I suddenly need that item that I finally got rid of, I’ll check with friends and family to see if they have one I can have, or borrow. I’ll check in the classifieds and see if there’s one for sale second-hand. If not, maybe, just maybe, I’ll have to buy another one. If I really genuinely need it, then the new one I buy will be a useful purchase!

I think the risks are pretty small, and I’m gonna take my chances. 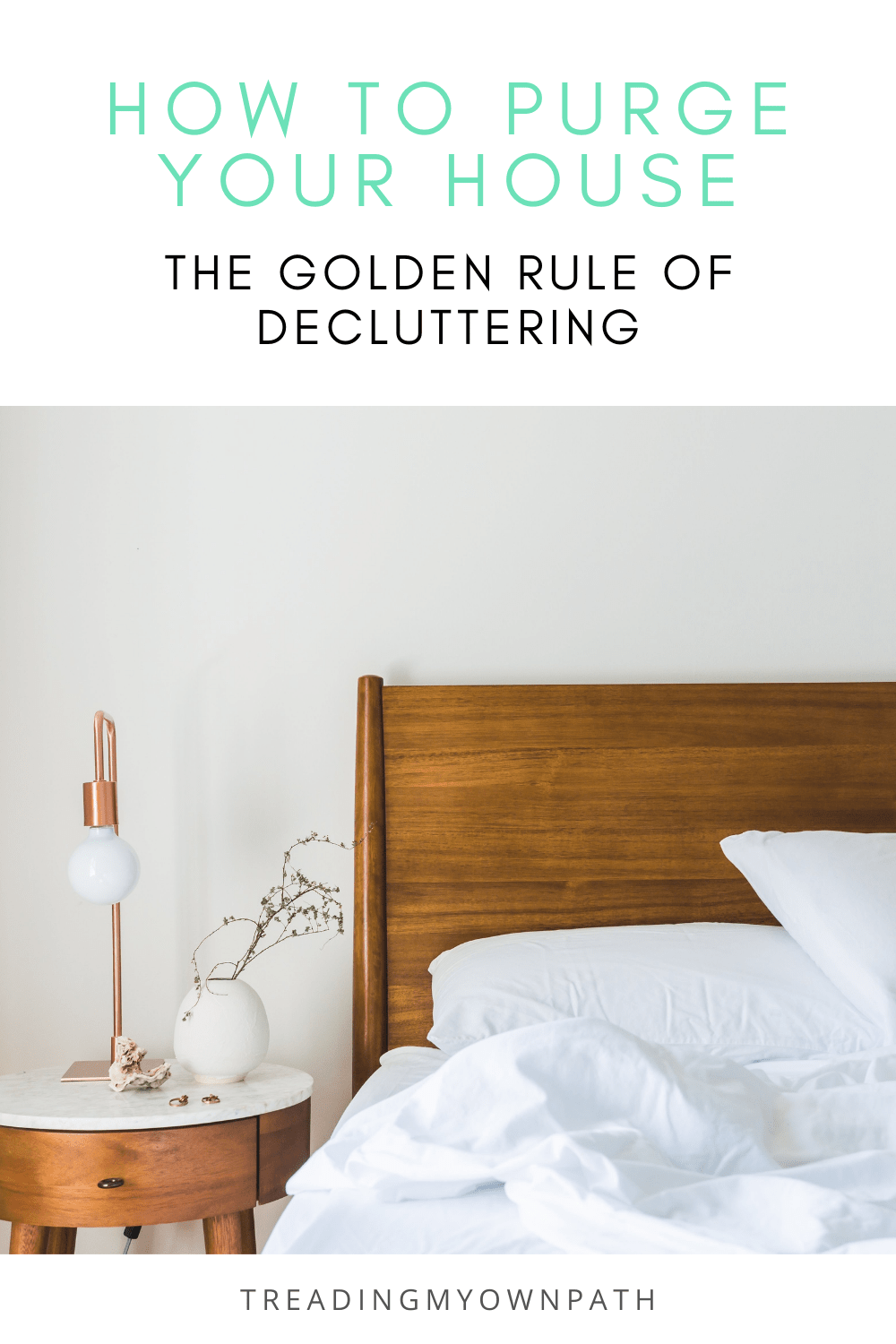 The Golden Rule of Decluttering

There’s a quote I see bandied round the internet a lot. A motto maybe, of minimalists everywhere. Words to live by or strive towards. When it comes to decluttering, I think it’s perfect.

“Have nothing in your house that you do not know to be useful, or believe to be beautiful.” ~William Morris

As we pack up this flat to move, this quote is our mantra. If it isn’t useful or beautiful, then it’s not coming with us.

How about you? What do you find easy to get rid of, and what things do you struggle with? Do you have a motto or rules that you live by when it comes to decluttering? I’d love to hear your thoughts in the comments!